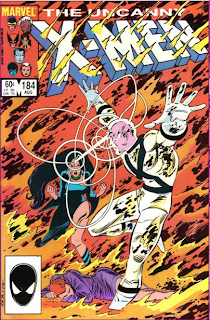 In a Nutshell
The first appearance of Forge.

Plot
In Dallas, Texas, Val Cooper and Raven Darkholme meet with Forge, a mutant inventor working for the government. He shows them a prototype weapon designed to remove mutants' powers as well as a scanner that can detect whether a person is a mutant or an alien. Meanwhile, in New York City, the time traveling Rachel watches a news report on the X-Men, confused by the differences she sees in the X-Men compared to the ones in her past. Selene, drawn to the girl's raw power, reaches out to her, intending to make Rachel her apprentice, but, telepathically sensing Selene's hunger, Rachel flees. She runs into a night club to hide, but is overwhelmed by the thoughts of all the people inside. Tossed out by the bouncer, the club owner, Nick, takes pity on her and brings her to his house.

As Nick prepares dinner, Rachel takes a bath, but when she finishes, she suddenly realizes she can't sense Nick. Returning to the living room, she discovers Nick's dessicated corpse, as well as Selene. Enraged, Rachel attacks Selene. With Rachel using telekinesis and Selene her control over inanimate objects, their struggle soon destroys the apartment and triggers a fire. Overwhelming Rachel, Selene begins to feed on her life essence just as the X-Men arrive, alerted to the battle by Cerebro, and attack Selene. Professor X is able to telepathically fight her off while the X-Men get Rachel out of the burning building. Outside, as Rachel comes to face to face with X-Men that vary significantly from the ones she knows, she realizes that she's made a terrible mistake. She's arrived in the wrong past, and as a result, the world is doomed.

Firsts and Other Notables
This issue is the first appearance of Forge, a Native American with the mutant ability to intuitively invent things. He will become a recurring and significant supporting character in the book before eventually joining the team. He appears in the context of a weapons manufacturer Mystique knows via her secret identity of Raven Darkholme (which is notable given the way those two characters will become intertwined years down the road), and he is currently attempting to duplicate Rom's Neutralizer and Analyzer weapons for the government to use against the Dire Wraiths, in a story unfolding in the Bill Mantlo-penned Rom series (Claremont will further acknowledge his friend's story a few issues down the road by having the Wraiths spill into this series).

Naze, Forge's Native American mentor, also appears for the first time. He will, after a fashion, play a significant role in the lead-up to the "Fall of the Mutants" crossover and feature in a future X-Factor storyline in the 90s. 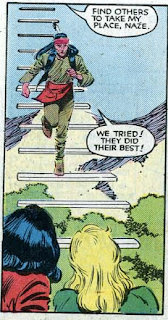 His dialogue to Forge in this issue is a reference to the events of "Fall of the Mutants", some forty issues away at this point, and also hints at Forge's past and magical acumen. 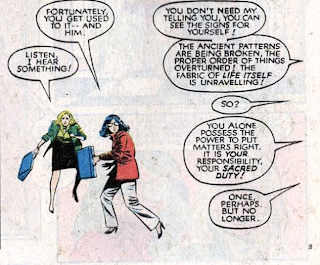 Rachel, after appearing in the present in New Mutants #18, returns to the pages of X-Men following her appearances during "Days of Future Past". By the end of this issue, she's forced to accept that she's landed in a different past than her own.

The X-Men come face to face with Selene, but she escapes, setting her up to be a recurring villain, here and in New Mutants, for the foreseeable future.

Colossus debuts his new costume in this issue; thankfully, it doesn't stick around for too long. 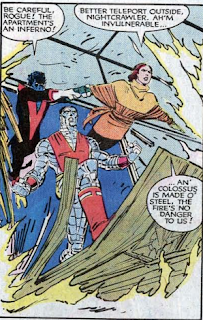 A Work in Progress
Similar to the Rom references, in a nice bit of cross-Marvel continuity, Forge notes that when Tony Stark stopped designing weapons for the government, he was able to step in and help fill the void.

Amongst the differences that convince Rachel that she's in a different past than her own are Illyana's age, Storm's punk look, the Mutant Affairs Control Act being passed by Senator Kelly instead of in response to his murder, and Professor X's ability to walk. 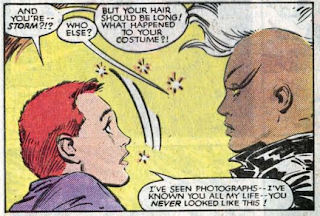 Rachel is savvy enough to read Nick's mind to make sure he has no ill intentions before going home with him.

When Rogue touches Selene, Selene begins to drain her energy instead of the other way around. 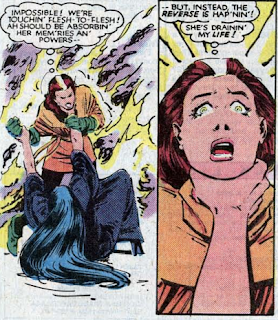 Taking a page from her predecessor's book, Storm is now angsting about her role as leader as she observes that Professor X is quite capable in the field. 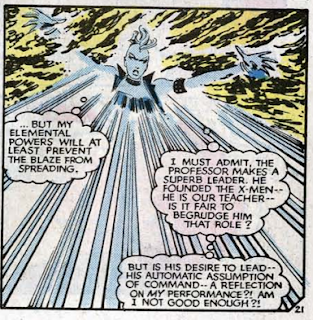 Rachel notes that Professor X taught her to recognize the psychic keys in someone's mind that indicate they're a mutant; I believe this is the first mention of the fact that mutants can be detected psionically, which also suggests how Cerebro works to find mutants (and hints at Rachel's eventual backstory).

I Love the 80s
This is one of the most hilariously 80s issues yet, just on the strength of Forge's look in his first on panel appearance: horizontal striped polo with the collar popped, short gym shorts, socks pulled as high as they'll go. 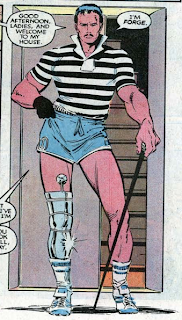 The club Rachel bursts into is described as being "members only", and both the owner and the bouncer are very much of the time.

Artistic Achievements
There's a neat visual depiction of Rachel's telepathy being overwhelmed in the crowded club, as a series of random, incomplete thought bubbles crowd the panel. 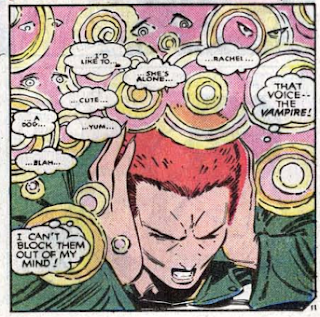 For Sale
There's a low-res ad for the Secret Wars action figures from Heroes World. Before internet walk-throughs and FAQs, there was apparently pay-by-the-minute video game tip hotlines... 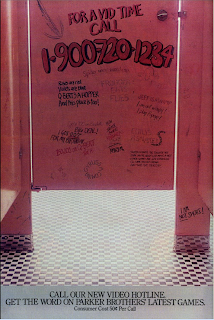 Bullpen Bulletins
The Hype Box highlights the first issue of the Transformers comic, originally intended to be a four issue limited series before its popularity led to it becoming an ongoing series that lasted 80 issues.

It's in the Mail
Cyclops answers the letters in this issue, referring to events in issue #175.

Teebore's Take
This issue is all about hindsight (or the lack thereof). With the X-Men relegated to the final pages as Claremont continues his more scattershot approach to narrative, it is largely intended to serve as an introduction to Forge, as well as a re-introduction to X-Men of Rachel (two characters who will have a significant impact on the title in the short, medium and long term). As a result, one's enjoyment of this issue largely depends on their tolerance for Forge and Rachel, two characters who have become negative shorthand for Claremont's tendency to give his characters excessively-complicated backstories. When I first started reading comics regularly, I became obsessed with first appearances, and as a result, I eagerly anticipated the X-Men Classic reprinting of this issue, knowing it featured the first appearance of Forge. Like readers at the time of the original publication, however, I didn't yet know Forge was a mutant cybernetic Native American Vietnam vet with magical abilities, nor had I (or the readers of the time) yet been subjected to issue after issue of Rachel's insipid crying or complicated backstory of her own (though hints at the future complications of both characters are present).

Divorced from the benefit/burden of hindsight, this issue is far more intriguing, with both Forge and Rachel furthering and deepening the mounting sense of dread surrounding the government's handling of mutants, in this, the critical year of the "Days of Future Past" dystopia. Forge's actions here pave the way for the government's most overt and significant attack on mutants yet, while Rachel's introduction to the X-Men brings to the forefront Claremont's ongoing references to "Days of Future Past" (once again, a lack of hindsight also benefits the such references, as, at the time of publication, that well hadn't been returned to quite as often as it has today). Selene, meanwhile, functions as a more overt and visceral antagonist for Rachel, with the scenes of her stalking the young girl appropriately tense and moody (let down somewhat by Romita's horribly dated fashions; but again, they only look dated in hindsight). Thus, this is an issue which has not aged well, thanks in part to the development of its two focal characters in the years ahead (it also admittedly suffers by following in the wake of the spectacular preceding issue). Separated from that history, however, and taken on its own merits, this is a suitably dark and foreboding chapter in the book's ongoing narrative.

Next Issue
Tomorrow, the "Demon Bear Saga" continues in New Mutants #19, and next week Rogue is targeted by the government in Uncanny X-Men #185.
Newer Post Older Post Home
Posted by Austin Gorton at 9:00 AM