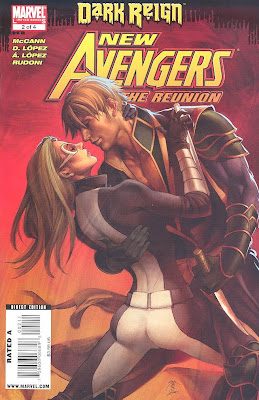 I don't pay too much attention to the wide reaching comics blog-o-sphere so I miss a lot of the current "backlash" that runs therein, however I believe there is a common concensus that the whole SECRET SKRULL INVASION mega-event sucked unshorn donkey balls.

Hawkeye has always been one of my favorite characters. I first became aware of him at the start of my comic reading days as he smoothly advised me in the back of some issues that I could save almost $3.00 a year! 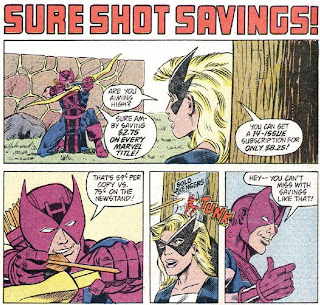 Then he died, apparently.

And came back as a ninja. Normally ninjas are sweet but I wasn't buying this Ronin thing.

Hawkeye was married to Mockingbird. Her personality was that she was the chick that hung around Hawkeye. Then, she wasn't around. Apparently, she died, too. I never really noticed.

So, then Mockingbird shows up in the middle of this SECRET INVASION thing saying "I didn't die. The Skrull who replaced me did!" and we're meant to be all "whoop-i-dee do" but I was more "whoop-i-dee don't care".

That was until I read NEW AVENGERS: The Reunion. 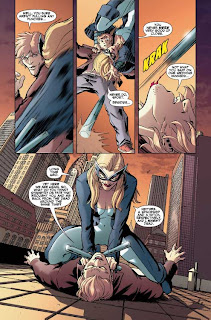 Writer Jim McMann transforms Mockingbird into a strong female lead you can care about and turns Hawkeye into the boy who desperately wants to get the girl but the girl is more intent on beating people up at the moment.

Hawkeye and Mockingbird are now MR and MRS SMITH ( the version in my head where the movie is clever and funny. I never saw the movie since I heard it was neither funny nor clever.)

You even get to see what happened to Mockingbird while she was a SKRULL prisoner! And it's cool! Unlike SKRULLS. Who still suck. And should have stayed cows.

For those of you who have Marvel Digital Comic Subscriptions, check out this series! For those who don't, jump on ebay or peruse your local comic shop and pick it up.