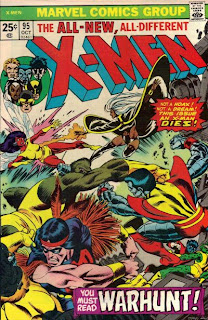 In a Nutshell
Thunderbird dies

Plot
As the X-Men plummet to the ground below, Storm catches Wolverine and Nightcrawler while Colossus lands safely and Cyclops waits for Banshee to deposit Thunderbird before coming back for him. Once safely on the ground, Nightcrawler teleports inside NORAD and knocks out Frog Man before opening a blast door to allow the other X-Men inside. As they penetrate deeper into the complex, Count Nefaria attempts to gas them, but the X-Men break through a wall into another chamber, where they encounter a group of hypnotized soldiers. Storm flushes out the gas and the soldiers with a flash flood, at which point the Ani-Men attack. 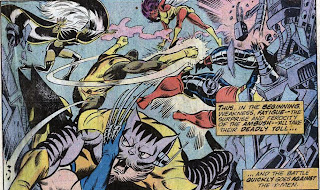 The X-Men defeat the Ani-Men, though Banshee and Thunderbird are knocked out in the process. The rest of the X-Men discover that Nefaria, his Ani-Men defeated, has set the base to self destruct. Cyclops tries to feverishly disable the countdown, but just as the clock is about to run out, Professor X telepathically tells him that he scanned the base and the X-Men's battle with the Ani Men destroyed the base's command relays and backups, so the destruct mechanism won't work. Meanwhile, Thunderbird and Banshee awaken and pursue Nefaria, who steals a jet in order to escape. Just as it takes off, Thunderbird leaps aboard and begins to pound on the vehicle, hoping to force it down. As the jet speeds away, both Banshee and Xavier plead with Thunderbird to get off the jet but he ignores them until his assault causes the jet to explode, killing him.

Firsts and Other Notables
Thunderbird dies, which in and of itself isn't that notable considering he's a character two issues old, but it is notable for being the first member of the new team to die in action, and the first out-and-out X-Man to shuffle off the mortal coil (Professor X/Changeling being not quite what we think of when we think of 'X-Men'). 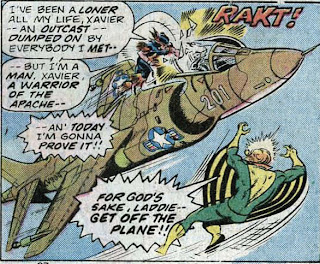 A Work in Progress
Curiously enough, though the explosion of the plane killed Thunderbird, Count Nefaria, who was inside the plane, somehow survives this encounter, and will pop up next in one of my favorite Avengers stories (in which he gains a bevy of super powers and fights the Avengers to a standstill).

That 70s Comic
In a scene you'll only find in comics, during the 90 seconds of free fall the X-Men have before they hit the ground, they manage to think back over the events of the previous issue, argue over who saves whom, get the entire team to the ground safely in two trips, and even provide a science lesson.


Claremontisms
In the days before Rogue and Gambit, Banshee was the go-to character for "ethnic" dialogue. 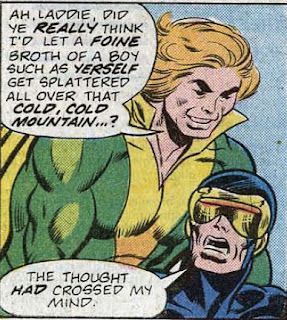 For Sale
Here's a Hostess Twinkie ad from last issue. Worth noting is the fact that the villain Captain Marvel is battling in this delightful snack food ad, Nitro, will later be responsible for giving Captain Marvel terminal cancer and much later, destroying the town of Stamford, Connecticut, leading to the passing of the Superhuman Registration Act and the events of Marvel's Civil War.


Bullpen Bulletins
It's not too late... 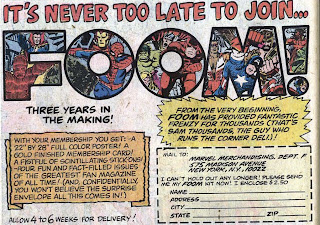 Len Wein on the death of Thunderbird
"'He was created to die...We did that intentionally to let the readers know, 'Anything can happen. Nothing is set in stone.'" Asked if there were concerns about potential backlash over a minority character being the target of such a move, he replied, 'Never crossed my mind.'"

Dave Cockrum on the death of Thunderbird
"Cockrum remembered things slightly differently...He and Wein initially planned the new team's first mission as 'an aptitude test or an entrance exam or something like that...They would be sent off to rescue the original X-Men, but the original X-Men would not actually be in any danger. We figured if it's an entrance exam, theoretically, there are people who are going to flunk as well as people who would pass.' Banshee and Sunfire, the previously established characters, were going to flunk, said Cockrum. 'Then we thought, well, that doesn't seem fair; we ought to have a new guy to flunk too, a new guy who's unsuitable." That new guy was Thunderbird, and when plans changed he made the unenviable career move from failure to corpse."

"Thunderbird was made up pretty much on the spot. I just wanted to do a Native American character. I was tired of buckskin so I gave him this flashy costume. Marvel rejected my first costume. Len said he looked too much like Steve Canyon, the character Milton Caniff created in the 1940s. I'm sorry we killed Thunderbird off because I thought he was a great character.

Thing was, he came in as an obnoxious wise-ass and loudmouth and Wolverine did that better. We decided we didn't need two loudmouths, and rather than develop his character, we decided to kill him off for shock value. It was the first time anyone had ever killed off a character and not said anything about it on the cover."

Teebore's Take
The new X-Men's first adventure comes to a close with a bang, wrapping up a rather perfunctory action story with a surprise (especially for the time) character death. Looking back, Thunderbird's death doesn't seem like such a big deal; sure, they killed off a member of the X-Men, but it wasn't like one of the cool/important characters died. Hindsight has made Thunderbird's death less dramatic. He was a member of the team for all of two issues, he was less interesting than X-Men stalwarts Wolverine, Nightcrawler, Storm and Colossus. But it's important to remember that, at the time, almost all of the new X-Men were as new to readers and underdeveloped as Thunderbird remains. At the point of his demise Thunderbird was as interesting a character with the same kind of potential as almost every other member of the team. We now have over 35 years of history with these characters to make us care about them, but we were allowed to develop that history because it was Thunderbird, and not Storm, Colossus, Nightcrawler or Wolverine, who was chosen to die. 35 years ago, Thunderbird was just as significant a character as any of the other new X-Men.
Newer Post Older Post Home
Posted by Austin Gorton at 8:00 AM