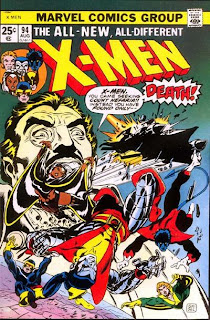 Plot
Professor X congratulates both the old and new X-Men on their victory over Krakoa, but is stunned when Sunfire angrily quits. After the new X-Men agree to stay, Marvel Girl, Iceman, Angel, Havok and Lorna Dane all announce that they are leaving as well, to pursue their own lives. Cyclops is torn between leaving with Jean and the duty he feels towards the X-Men. Ultimately, when the original X-Men leave, he decides to stay and begins rigorously training the new X-Men.

Meanwhile, Count Nefaria and his Ani-Men breach the NORAD complex in Valhalla Mountain, Colorado and take control, threatening to unleash America's nuclear arsenal on the world unless they receive a ransom from every country on Earth. With the Avengers otherwise occupied, Beast asks the X-Men to respond, and they depart to oppose Nefaria. As they approach NORAD, he detects their approach and uses the weapons at his command to shoot down their plane.

Firsts and Other Notables
Chris Claremont receives his first credit on the book, for scripting over Len Wein's plot. This is also longtime X-Men and iconic letterer Tom Orzechowski first issue of the book.

This issue and the next were originally intended to appear as one story in Giant Size X-Men #2, with the adventures of the new X-Men continuing in quarterly Giant Size issues. Between the publication of Giant Size X-Men #1 and this issue, however, Marvel decided the Giant Size quarterlies weren't profitable enough, so the X-Men were restored to their original title, to be published bi-monthly, picking up where the numbering of the reprint title left off. The story intended for Giant Size X-Men #2 was split in two and had some additional pages added to it.

Sunfire quits the team in this issue's opening pages, and is largely a jerk about it, as do Marvel Girl, Iceman, Angel, Havok and Lorna Dane, leaving Cyclops as the only remaining original member of the team. Angel and Iceman will shortly join the short-lived, eclectic superhero team the Champions of Los Angeles. 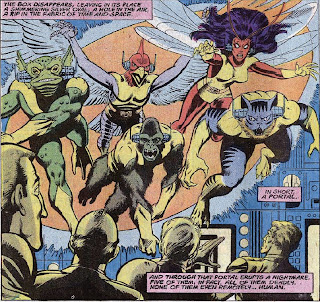 The words "The All-New, All-Different" appear above the X-Men logo for the first time.

A Work in Progress
While Cyclops has been the nominal field leader of the X-Men since about issue #7, this is the first issue where he really starts to feel like the X-Men's leader, in large part because it is Cyclops, not Professor X, who leads the new X-Men's training sessions in the Danger Room. 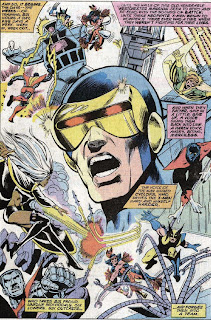 Furry Beast appears in X-Men for the first time, in a brief cameo in which he asks the X-Men to take on Nefaria in place of the Avengers. 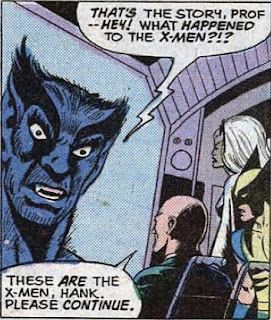 Cyclops' piloting skills are established for the first time, as he's seen flying the X-Men's jet, and said jet is also revealed to be a modified SR-71 Blackbird, both of which are likely the doing of Claremont who, we will see, is something of an airplane nut. 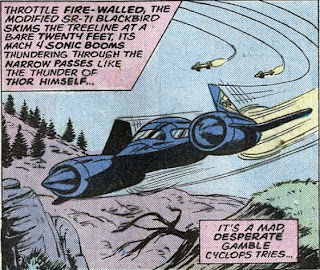 The backup story following the reprint of this issue in Classic X-Men #2 retroactively establishes the beginning of the close friendship between Storm and Jean Grey, something we'll see develop over time but, this backup aside, involves a lot more telling than showing.

That 70s Comic
The Silver Age might be over but we're still getting hilarious expository dialogue. 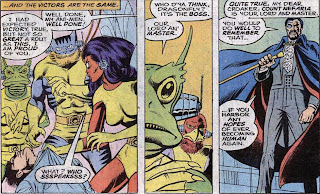 Thunderbird has taken to calling Cyclops "One-Eye", which Cyclops angrily corrects. This reminds me of how commenter and friend of the blog Joan Crawford refers to Cyclops as "Orbo". 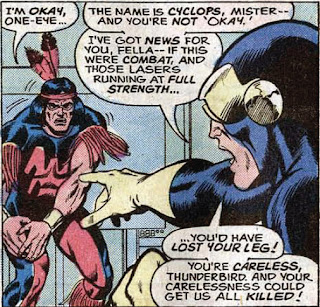 Claremontisms
Claremont likes to reference the ethnicity of his characters by sprinkling words of their native language into their dialogue; we get the first example of that here, as Colossus refers to Professor X as "Gospodin Xavier." 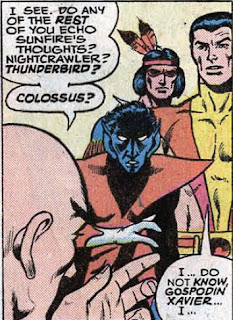 Young Love
As Jean leaves the school, she and Scott profess their love for one another and kiss on panel for the first time (one would hope they've kissed behind the scenes already, but this is the first time it appears in the comic). 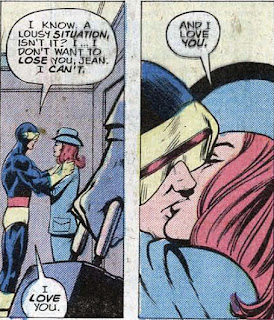 The Awesome and Terrible Power of Cyclops
As Cyclops muses over whether to leave the X-Men or stay behind, he curses his power and clenches his fists with angst. 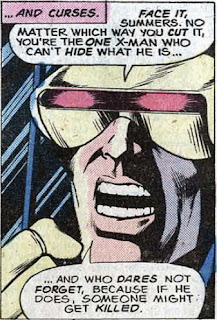 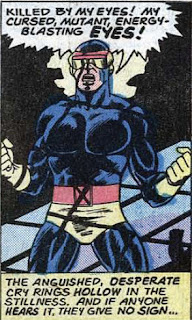 Human/Mutant Relations
The army is less than thrilled when the X-Men show up instead of the Avengers. 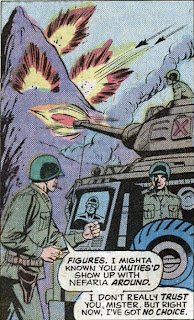 For Sale
Snap into a Slim Jim! 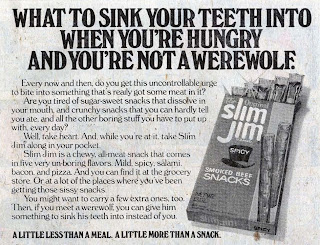 Chris Claremont on being assigned X-Men
"Len decided he'd had enough of being Editor-in-Chief. He gave notice and part of his severance package was to write four books-Fantastic Four, Spider-Man, Thor and Hulk. Len said he could write a book a week, but X-Men would have been too much. X-Men was originally supposed to be a quarterly, which he could have handled, but then they decided that Giant Size quarterlies were not profitable. They made X-Men a bi-monthly book and Len felt he just didn't have the space in his schedule to do it. It was also a very low profile assignment since it was only a bi-monthly title. No one had any great expectations for the book, but the new X-Men were great characters. So, God smiled and Len tossed it into my lap. It was like a dream come true."

Teebore's Take
Chris Claremont gets his first credit on X-Men, though he's only scripting over Len Wein's plot, a plot which, like Giant Size X-Men #1, is very much of its time (even a little retro). Count Nefaria remains the Silver Age villain, employing a team of underlings in the service of a grandiose plot whilst twirling his mustache. Last time, it was Plant Man, the Eel, etc. taking Washington DC hostage; this time, it's Frog Man and Dragon Fly capturing NORAD. Same stuff, different story.

Left with a fairly routine plot, Claremont does what he can via the dialogue and character interaction to leave his mark and jazz things up, though as Jason Powell points out, his early efforts here at the kind interpersonal drama that would define his run are clunky at best, coming for the most part via the Cyclops/Thunderbird antagonism. Still, glimpses of what Claremont is capable of and what is to come are present: there is a nice, easily overlooked scene between Nightcrawler and Cyclops, Scott and Jean's relationship feels more real than it ever has, and for the first time, Cyclops is really shown to be the leader of the team.
Newer Post Older Post Home
Posted by Austin Gorton at 8:00 AM