Another light week (I'll discuss the post-Super Bowl Glee episode in next week's post; I haven't had a chance to watch it yet).

Top Chef All Stars: An Offer They Can't Refuse 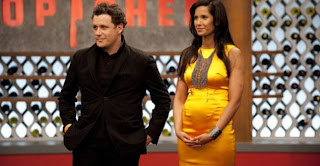 It's kinda funny. During his season, Tre seemed like a force, a definite contender for the finals, and there was a lot of shock accompanying his perceived early exit during Restaurant Wars. Yet this season, he's kinda faded into the background. He's obviously just as talented, since he lasted this long, but he's never seemed like the force he was during his season.

So when Tre got sent home this time around I wasn't nearly as bummed as I was the last time. This just never seemed like his to win, I guess. That said, at least from the way it was edited, I definitely thought Mike should have and was going home (and between his Marcel slamming last episode and the ramping up of his arrogance this episode, he's now become the contestant I most want to see go home, whereas earlier in the season, I found his bravado more entertaining). Near as we could tell, Tre's mistake came down to one of taste (well, moreso than usual): Tom likes runny risotto, Tre makes his stiffer. I happen to agree with Tre, but Tom doesn't, so Tre was sent home. Obviously, I'm sure there was more to it than that, but that's how it was presented via editing.

What's even more sad/hilarious is that, as we saw in that little flashback, Tre was praised for his risotto and won a challenge with it the first time around. But now Tom has suddenly decided he doesn't like the way Tre makes it...

The whole Isaac Mizrahi Quickfire was some pretty shameless cross promotion ("hey, he has a show on Bravo too! What a coincidence!") but I did enjoy some of the wacky shit it led to, especially Angelo's bizarre "crocadile" skin. Angelo kinda bugged me the first time around, but now I find myself enjoying his goofy craziness. 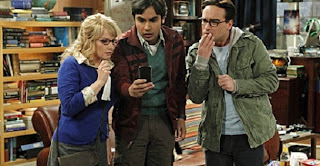 So, did Sheldon's acting lessons with Penny help him become a better teacher? What about Raj's fantasies involving Bernadette? Is he still randomly spacing out in front of his friends? Did he tell anyone about them or act on them in any way?

Another non ending aside, this honestly wasn't that bad an episode. The Raj/Bernadette fantasy stuff was pretty repetitious and one note, but it did yield some good lines ("Most of them regular, some of them kinda messed up.") and it was nice to see Raj given something to do. And Sheldon and Penny pairings are generally funny. It just seems like this show has settled into a rut, where it knows what it's got is good enough to be the second highest rated comedy on TV and so it just keeps throwing more of the same out there. I'd like to see the show stretch a little bit, do something a little unexpected. And, you know, actually conclude a story every once in awhile...

Sheldon: My body and I have a relationship that works best when we maintain a cool, wary distance from each other. 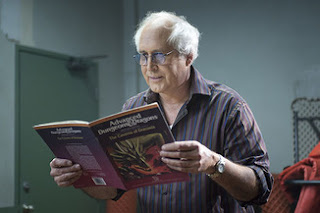 Much has been made on the internet (well, the part of it that talks about Community...) about the heavily metatextual episodes (like the Halloween episode which spoofed zombie movies, or "Modern Warfare", which lampooned action movie cliches) as opposed to the quieter, less zany episodes. With "Advanced Dungeons and Dragons", Community managed to do the seemingly-impossible: an episode that is both referential (a parody of The Lord of the Rings with tons of D&D jokes) and a bottle show (the entire episode is just the characters sitting around a table playing Dungeons and Dragons). And in the process, it turned out one of my favorite episodes of the seasons.

If I had one complaint, it was that Pierce was played as too broad a villain. The episode needed one, but Pierce was such an ass that it makes you wonder why the rest of the group doesn't just tell him to take a hike. The bit with everyone pitying him, and Neil (who was the object of most of his villainy) essentially forgiving him helps, but it's still a question that needs to be answered, and maybe shouldn't have been raised in the first place.

That aside, everything else was pretty damn brilliant, from Abed's bad character names to Britta championing the rights of the disenfranchised gnome waiters to Annie-as-Hector the Well Endowed's pantomime seduction of the Elf Maiden, which had me laughing so hard I almost peed.

Abed: You have successfully rubbed your balls on his sword. 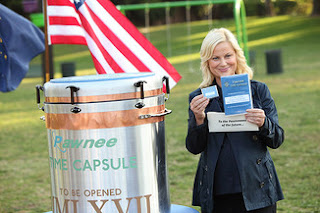 One of the things that's great about this show is it's ability to just fling random cast members together and watch hilarity ensue. Last week, it was Andy and Ron, two characters who'd never really interacted much, bonding over a shared love of meat and general manliness. This week, we got the streamlined perfection machine that is Chris helping the unabashedly mediocre Andy (positive traits: nice, and in a band) win back April. There's plenty of reasons such a pairing shouldn't work, as these two characters have little in common, but the show finds a way to make their budding friendship believable, and funny.

The main plot of the episode involved Leslie creating a time capsule for the future citizens of Pawnee, and amongst other things, it led to a great list of all the slogans Pawnee has adopted through the years (amongst my favorites: "Pawnee: Welcome, German soldiers!" (the mayor got a little nervous after Paris fell), and "Pawnee: First in friendship, fourth in obesity") and an extended bit in which guest star Will Forte chained himself up in Leslie's office in order to get her to include the Twilight books in the capsule (I generally like Forte, and I thought he worked well here, though the highlight of this plot was Tom's enthusiasm for the books once he read them).

After calling a town meeting (or "crackpot convention", per Ron) to discuss what to include in the capsule (I loved the bit where Leslie finishes her opening remarks by saying that because the capsule is being put together by a government department, they can't include any corporate sponsorships or religious items and then the first suggestion is the bible) and ending up with over a doze categorized capsules, including one for pet ashes, Leslie decides to include in the time capsule nothing more than a recording of the meeting in which everyone argued over what to include, which she felt was the best representation of Pawnee at the time, a time when everyone argued passionately about everything, which was a humorous and apt ending.

Donna: Five minutes with me, Robert Pattison would forget all about Skinny Legs McGee.
Newer Post Older Post Home
Posted by Austin Gorton at 8:00 AM