Retro Review: Homer at the Bat 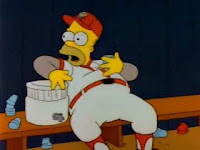 Or the One Where
Homer is benched in favor of professional baseball players brought in to play on the powerplant softball team.

The Setup
After making a million dollar bet on the outcome of the Springfield/Shelbyville game, Mr. Burns hires nine ringers from Major League Baseball to play on the company softball team.

Notable Notes
Each of the nine guest-starring ball players recorded their part separately, over the course of six months, whenever their respective team was on the West Coast playing the Dodgers or Angels.

Apparently, Jose Canseco didn't like his original part (which involved his missing the game after waking up in bed with Mrs. Krabappel) and the writers were grudgingly forced to re-write it and make him more heroic.

Ryne Sandberg and Carlton Fisk were both asked to appear, but turned it down.

Roger Clemens made his own chicken noises.

Don Mattingly, who in this episode is thrown off the team by Mr. Burns for failing to cut his non-existent sideburns, would later be forced to cut his long hair by the coaching staff of the New York Yankees, and was even removed from the line-up once for failing to do so.

This is also the episode responsible for me calling one of my managers at Barnes and Noble "Skip". 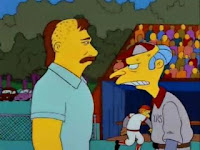 Umpire: Okay, let's go over the ground rules. You can't leave first until you chug a beer. Any man scoring has to chug a beer. You have to chug a beer at the top of all odd-numbered innings. Oh, and the fourth inning is the beer inning.
Chief Wiggum: Hey, we know how to play softball.

Marge: What makes you think this Darryl Strawberry character is better than you?
Homer: Marge, forget it. He's bigger than me, faster than me, stronger than me, and he already has more friends around the plant than I do.
Bart: You make me sick, Homer. You're the one who told me I could do anything if I just put my mind to it! Homer: Well, now that you're a little bit older, I can tell you that's a crock! No matter how good you are at something, there's always about a million people better than you.
Bart: Gotcha. Can't win, don't try. 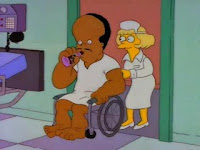 Teebore's Take
Considered by some to mark the beginning of the Golden Age of The Simpsons, "Homer at the Bat" is one of my favorite Simpsons episodes. This aired right around the zenith of my baseball card collecting days, during my first infatuation with baseball (I cooled on the sport in high school, then rediscovered my love for it in college), and I had a blast seeing all these big name ball players I knew from their baseball cards appear on the show. I still remember that initial rush of excitement every time I re-watch it.

It also helps that this is a pretty good episode, nostalgia and love of baseball aside, with some great parodies of sports cliches and sports movies, and it's impressive that each of the nine baseball guest stars are given a distinct personality while the Simpsons themselves remain central to the plot, all in twenty-two minutes. And of course, the various misfortunes that befall the ringers right before the big game (except for Homer's ringer) are just classic, classic Simpsons bits (my favorites are Ken Griffey Jr.'s gigantism, Steve Sax getting arrested by every unsolved crime in New York, and the Mattingly hair debacle). Plus, it's all topped off with one of the best original Simpsons songs.

Arguably the best Simpsons sports episode of all time, it's also tremendously funny. A great example of The Simpsons in its prime. 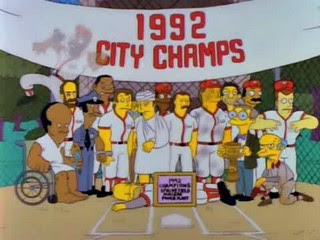