Slowly catching up on backlogged TV. Look for my thoughts on the Oscars sometime tomorrow.

The Simpsons: Angry Dad The Movie 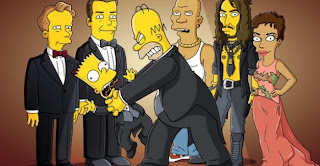 This may seem funny coming from someone who not only watches but occasionally really likes later day Simpsons episodes, but I'm not a big fan of episodes which take the family far outside their normal surroundings, not necessarily literally ("Bart vs. Australia" remains one of my favorite episodes) but in terms of the situations in which they find themselves. For example, in "Bart vs. Australia", the Simpsons may be visiting Australia, but they are still a relatively normal family visiting that country. Whereas in this episode, the Simpsons are suddenly Hollywood figures scooping up awards and going to the Oscars (plus, there's the issue of the fact that no company would  involve the creators of a property in that property's film adaptation as heavily as Bart is involved with the creation of the "Angry Dad" movie).

As a result, most of the humor in this episode came from the non-Simpsons portions of the episodes, like the various short film parodies, or the guys from "Mixar" being brutish thugs who set Randy Newman on Lisa ("you've got an en-e-my..."). So some decent stuff on the edges, but I still couldn't embrace the conceit of the Simpsons as Oscar hopefuls enough to fully enjoy the episode.


Family Guy: German Guy
I'm not the world's biggest Herbert fan (is anyone other than Seth MacFarlane?) so I pretty much tune out whenever he's featured. Add to that a climax which features another of Family Guy's patented "goes on so long it stops being funny then loops back around to being funny" gags (the old man fight) that wasn't funny to begin with (and lacked the visceral enjoyment of the Peter/Chicken fights) and you've got a pretty lackluster episode. My favorite bits were Chris' re-enactment of Twilight with puppets and the whole "how do I know which one is real?" gag when Chris and Peter got captured. Otherwise, too much Herbert, not enough laughs. 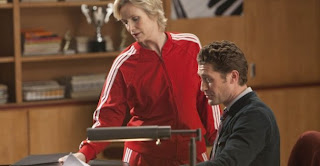 Well, Sue came back, and while she had some pretty funny bits, with her came a return to mediocrity after last week's much-improved episode. Granted, the whole "Sue becomes a member of the glee club" plot was handled a lot better than it could have been, but it's unfortunate that the writers feels compelled to keep Sue locked in as the show's villain. Every time she seems to take step towards good (or at least, closer to realism) she gets reverted back to over-the-top villainy. Here, for all the apparent growth she experienced as a result of her time in the glee club, by episode's end, she's back to her old tricks and positioned squarely as the show's antagonist. Sue can be hilarious, but the stagnation of her character has become tiresome.

Things I Shouldn't Worry About: So New Directions is facing off against the Warblers and Aural Intensity at Regionals this year? Aural Intensity being the other group that beat them last year. So where is Vocal Adrenaline? Shouldn't they be facing them again, since they're obviously in the same, ahem, region? Surely, Vocal Adrenaline didn't fail to place this year, after winning last year (you'd hope that would get a mention). Seriously, how the hell does the show choir competition circuit work on this show?

The whole Rachel/Mercedes diva off was a random half-formed subplot in the episode. I'm glad it didn't amount to much (as the Rachel/Mercedes friendship is a rare bit of positive character development) but it seems odd that the whole thing was brought up then dismissed so quickly.

That scene in the cancer ward was pretty over-the-top. I wouldn't have minded it as much, though, if, like I said above, Sue's reaction to it wasn't reset by the end of the episode.

The Puck and Lauren storyline remains one of the show's recent bright spots, and I particularly enjoyed that Lauren was a decent but not spectacular singer.

Favorite Song: Probably "Take Me or Leave Me" since I'm a sucker for Rent (I'm frankly surprised this was the first song from that show that Glee has featured). The Bieber songs weren't bad, but well, they were Bieber songs. And the final song was well done, but I'd never heard it before, so it lacked any personal connection for me.

Sue: I just stopped my own heart. That's my CIA training.

Brittany: Most teachers think that by cutting class, I might improve my grades.

Santana: Every time you open your humongous mouth to do an impression or moisten an enormous stamp for a lazy giant, you get one step closer to everyone seeing you're actually a dork.

(Honestly, this was probably one of the show's funnier episodes this season. It's just too bad it didn't have much else going for it).


Top Chef: For the Gulf 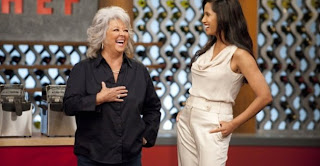 One of my big frustrations with Top Chef has always been it's "one-by-one" approach to judging, in which each challenge stands on its own and each contestant is judged based solely on that challenge's dish. While it is heavily documented that this is the approach the judges take, I've always thought it was dumb, preferring instead a system that would give weight to the current challenge while still keeping in mind the contestants' previous work. I know that's not how the judging work; I'm just saying it's how it should work.

Because the way they do it now is flawed, and creates a situation at least once every season in which a chef who is clearly more talented (based at least on how the reactions to their food by the judges is presented to the viewing audience) than his or her peers is sent home. Dale, who as presented, is clearly a better chef than Tiffany or Cheatin' Mike Isabella, is out of the competition due to one bad dish, despite having (probably) won more Quickfire and Elimination challenges than any previous contestant. Yes, it's important that everyone's food is always good, but it's stupid that the judges don't, when comparing two lackluster dishes, factor in things like Tiffany always skirting along the bottom whereas Dale consistently comes out on top. Was Dale the worst contestant in this round? Probably. Was he the worst contestant left? Probably not, and to me, the later is more important than the former.

But that's Top Chef, I suppose. It's always been that way, and I doubt they'll ever change the approach. The other big event in this episode was Mike Isabella making an ass out of himself, stealing a dish from Richard then refusing to own up to it (because he knows it was wrong) and antagonizing Antonia in the Stew Room (or, as Mrs. Teebore put it, "eh, I'm froma New Jersey. I'm-a flicka my boogers if I want, whatchu gonna do about it >imaginary fist bump<"). Just as in his previous season, I was amused by Mike's mildly-chauvinistic antics for a time before it became clear that he was outlasting more talented chefs. He's officially reached that point for me now in this season; with Dale gone, the final four had better be Richard, Carla, Antonia and Tiffany.

Other thoughts:
I liked that Richard, who owns a burger restaurant in Georgia, didn't make a big deal out of "I'm from the South, I'd better do well in this challenge" and instead just did well in the challenge.

The way it was edited, I was really surprised Richard won. I thought for sure Mike was going to take it, further infuriating everyone.

As always, no one has more grace in defeat than Carla. She's not always perfect, but she always knows exactly what she did wrong.
Newer Post Older Post Home
Posted by Austin Gorton at 8:00 AM