February sweeps are in full swing, but I had a somewhat hectic week and haven't caught up with some of the later-in-the-week shows yet (including last night's Fox shows).

Anyways, here's what I thought about what I did see last week.

How I Met Your Mother: Oh Honey 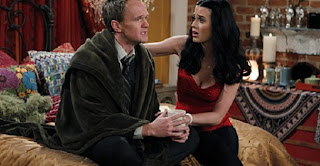 First of all, I am from and live in Minnesota, and I can assure our out-of-state readers that we do, in fact, ignore calls from numbers we don't recognize. Heck, I do it on an almost-daily basis.

(But I did always have to answer the phone with my last name when I was younger and living at home...)

To be fair, this is the first episode in which I liked Zoey, at all. The biggest problem with her remains far too much telling, not enough showing. Earlier, I've complained that Zoey and the gang's friendship was an act of telling: suddenly at the beginning of one episode SagetTed tells us "well, the gang and I were friends with Zoey now". We never got to see that relationship develop naturally, we never got to see Zoey participate in shenanigans with the group. We didn't then (and still don't) know what Zoey thinks of anyone other than Ted. Does she find Barney's antics humorous or callous? Is she pro-baby or anti-baby? Does she share Marshall's affinity for xenobiology or Robin's inherent skepticism? Who knows? We were just told she's friends with everyone.

Now, we're being told that Ted's in love with her, and she with him. Sure, we all saw this coming, even before they shared a dance at the museum, even before the clock started ticking on Ted seeing her as something other than a friend. But just because we know it's coming doesn't excuse the writers from making us buy into it, instead of just saying "yeah, they're in love now."

Look, I'm enough of a romantic sap to appreciate the scene between Ted and Zoey in the hallway on some level (both performances were great, especially Ted's pain at pretending to hate Zoey and the dual calls with Marshall, plus the whole "you don't speak Portugese/yes I do/...and you're a show off" sequence got the biggest laugh of the night from me), but the fact is, I have no emotional investment in their relationship (or, as Alan Sepinwall put it, their coupling works on a micro level (this episode) but remains problematic on the macro level (the overall arc of the season)). Compare this to Ted's wooing of Robin in season one, culminating in his making it rain; that was a romantic moment the show earned. Heck, even his reunion with Victoria after their one night together worked, because the episode which that reunion concluded was spent showing us Ted falling for her. Here, it just feels like Ted and Zoey are in love with each other because that's what's supposed to happen at this point in the season.

Problematic Ted/Zoey coupling aside, the rest of the episode was pretty good. I definitely appreciate that, even after devoting an episode to Marshall dealing with his father's death, he's not back in New York like nothing happened, and most of the Minnesota/Marshall's family jokes worked for me. Katy Perry was the ideal guest star, one who managed not to stand out, despite her oversized...personality. And the structure of the episode (written by showrunners Bays and Thomas) was classic HIMYM, using the multiple calls with Marshall to develop and deepen our understanding of the situation along with the characters. It's just that for this whole Ted/Zoey thing to work the writers need to show us why they care about each other, instead of just telling us. 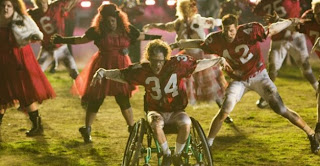 Given Glee's penchant for big, over-the-top spectacle at the expense of things like character and plot, and the fact that this episode aired whilst on one of the show's biggest stages, I'm a bit surprised at how relatively sedate it was. Instead of something like the Rocky Horror or Madonna episodes, we got a surprisingly straight-forward story about tolerance and the relationship between sports and the arts. Which isn't a bad thing, just a surprising one.

It usually doesn't work, but this episode managed to successfully have its cake and eat it too. While it's patently ridiculous to think that one week of forced glee clubbing would miraculously mellow out the football players, it was nice to see the two teams come together and perform the half time show. That said, the show managed to keep at least a few toes in something approximating our reality by making it clear that, yes, a week of forced glee clubbing doesn't mean everything is suddenly hunk dory, and with the football players more on top of the social ladder than ever, they have even less incentive to keep hanging out in glee club, even if they did enjoy it to some extent. In doing so, the show managed to walk the very fine line between presenting a fictional (albeit better) world where the power of music brings people together and one more closer to our reality in which things aren't quite that simple.

This week in "Continuity Issues that Shouldn't Bug Me Cuz They Clearly Don't Bug the Writers": so, is it safe to assume that every anti-glee club football player in this episode wasn't on the team last year, when the whole team danced to "Single Ladies" and Kurt kicked a winning field goal? (Also, I think it's hilarious that the glee girls' parents had to sign permission slips for them to play football, but dimmer-than-a-bulb Brittany's consent, rather than her parents, was enough to clear her for her role as a cannonball).

Also, while I get that the Glee Clubbers get slushied because the football players are bigger than them, I'd think that when the Puckheads went after the football team, the footballers could have just fought back. Sure, a brawl would have broken out, but that's never stopped them before.

The scene with the Warblers felt very shoehorned, like the show realized it needed to include Kurt and Joe Mauer for a larger audience that might not have ever seen the show before, but I did like the scene between Rachel, Mercedes, Kurt and Mauer. Also, it's great that even Mauer thinks Kurt's over the top sometimes.

I appreciate that there's some effort being put into to making Karofsky more than just the "secretly gay so he's a bully" cliche. I'm not quite sure I'm at the point where I can see him becoming Kurt's boyfriend (one of the more persistent rumors I see tossed out there) but at least he's becoming an actual character.

Favorite Sue Line
Will: The risk and danger isn't to you!
Sue: That's the best part.

Favorite Musical Number: While ultimately pointless (I assume the pre-"Thriller" warm up number didn't get performed at the half time show) I really liked the performance of "She's Not There", and thought it showcased Finn's voice nicely. 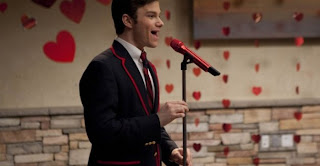 A surprisingly restrained Ryan Murphy turns in one of the best episode of the season, smartly choosing to take a break from the spectacle and Sue-shenanigans to focus entirely on the kids and their teen-heightened romances (plus, there was a Willow reference; I'm easy to please). We even got some character development for Joe Mauer, who so far, has been little more than the Aslan of Tolerance Narnia (credit to Todd VanDerWerff  for the term "Tolerance Narnia"). I might just have to start calling him Blaine.

Finn's characterization in this episode seemed a bit off though, as he's generally depicted as being too affable and too much of a stand up guy to orchestrate the kind of Machiavellian relationship manipulations he did in this episode. Granted, Glee has always played it fast and loose with certain characterizations, and I get the idea that in the wake of the football team's victory Finn is flush (and a bit mad) with power, but Finn has always benefited from a more consistent portrayal. Still, at least Murphy had Quinn acknowledge Finn's odd behavior; I can be more forgiving of erratic character behavior if the writer at least realizes he's doing it.

Puck is one of the few Glee characters I like without reservation, and the highlight of this episode was his interactions with Lauren, who is quickly becoming another favorite. Seeing Puck fall so hard for someone so far outside his usual type, then get rebuffed, was great. Lauren meanwhile, in her short time getting regular air, has quickly developed a strong personality and presence beyond being "the tough fat girl".

I'm also digging the budding friendship between Rachel, Mercedes and Kurt. I like Rachel a lot more when she's not so intolerable that no one likes her, and Kurt seems to have mellowed a bit since transferring to Tolerance Narnia, making their scenes together more enjoyable.

The bit with Tina breaking down while singing "My Funny Valentine" was just painful; I kept expecting it to lead to something more, and instead it was nothing more than an unfunny "she's overly dramatic about her relationship" joke.

Also, Santana in that candy striper outfit? More, please. In fact, I wouldn't object at all to the three Cheerios in glee club not being forced back into their uniforms any time soon.

Favorite Song: I thought that Rachel's version of "Fireworks" was even better than Katy Perry's, but Puck's rendition of "Fat Bottomed Girl" was a hoot. 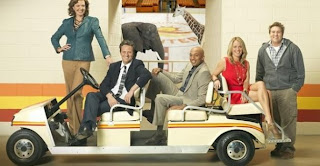 Mathew Perry is one of those actors who I will follow to most any show. Toss in Alison Janney, Better Off Ted's Andrea Anders and a pilot directed by Aaron Sorkin-favorite Thomas Schlamme, and Mr. Sunshine was guaranteed to keep me watching for at least a handful of episodes sight unseen.

Unfortunately, the show might need that long of a leash, as all those elements didn't quite come together in the pilot. While the actors involved did their best with the material given (in particular, there was a joke involving clowns that was telegraphed a mile away, but I still laughed my ass off because Alison Janney sold the hell out of it), the tone of the show fell somewhere between darkly comedic and unreally cartoonish, unsure whether it should embrace or mock its misanthropic protagonist. I've heard the pilot was reshot in order to lighten Mathew Perry's character, so perhaps this tonal schizophrenia is a result of that; hopefully the next few episodes will have a stronger handle on how it feels about its world. There were still plenty of laughs to be had, but the unclear tone left the show feeling distinctly average and identity-less; like it tried to be two things at once and failed at both.

However, this is just the first episode, and pilots can be troublesome (and I generally find them tedious). Like I said, the cast involved means I'll give this show plenty of chances to win me over. I just hope the pieces come together sooner rather than later, and that the show becomes more comfortable about itself, so that I end up watching for something other than affection for the actors involved.
Newer Post Older Post Home
Posted by Austin Gorton at 8:00 AM