Sorry for the delay. I was off work yesterday (yay Presidents' Day!) and having network issues at home, thanks to the foot and a half of snow the greater Twin Cities area got hit with over the weekend.

A busier week than usual on top of cold left me with little TV watching time. Here's what I got.

The Simpsons: The Blue and the Gray 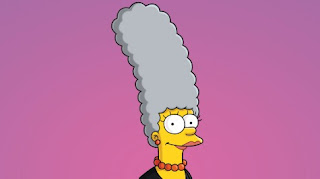 When I first read the description for this episode, I was about to go all Comic Book Guy on it for ignoring the classic Simpsons episode in which Marge gets mad at Homer for revealing she dyes her hair (amongst other things) to the marriage class he's teaching, but this episode worked that into its story, so I can't complain.

In the end, we got an unremarkable but entertaining Homer/Marge episode (and thankfully, not another Moe episode, which I feared at the beginning) with some decent bits throughout. My favorite was the kids freaking out about not knowing where their head ends and their hair begins. 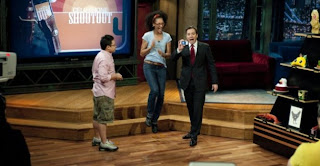 You know, I ragged on Fabio a lot at the beginning of the season, but I can't deny that I'm going to kind of miss him. Like, I'm not upset he's no longer a contestant, but could he just hang around pronouncing things in broken English like "booger" while the rest of the contestants compete?

While I thought the judge-each-other's fondue quickfire brought this season's now-characteristic clever spin to things, I was a bit disappointed that we didn't get more actual judging out of the contestants. Other than Padma's seemingly-random interrogation of Dale for placing Mike on the bottom, we received no idea why certain chefs were picked for the top or the bottom. Seems like a missed opportunity for the producers to generate some of that inter-chef drama on which they thrive. I definitely like the idea of a round where the contestants judge themselves; I just would have liked to see more actual judging.

If the Quickfire failed in an attempt at trying something new, well, the elimination challenge didn't even try, falling back on that old Top Chef staple: cook for a random celebrity who is a big fan of the show. Thankfully, the challenge wasn't more complicated than that, asking the chefs to simply present their spin on some fairly basic meals (at this point in the competition, I get bothered when the challenges become super-gimmicky, preferring instead to watch the chefs just be allowed to cook their food with minimal restrictions). Also, it helped that Jimmy Fallon, unlike some previous celeb guests, seems to genuinely be a fan of the show, and was noticeably excited to be served food prepared by Richard, Carla, etc. Also, he and his guests at the birthday party were generally pretty funny.

When it came to elimination time, I totally fell for the editing that made it look like Dale was going home. One of the reasons I read the various judges' blogs is that they often tell a different story of Judges' Table than the one the editors do. This week, it was made clear that while Dale's dish was very salty, it wasn't inedible; just unappetizing. Whereas Fabio's burger was so far off the mark and his cheese sauce actually inedible that he was chosen to go home. 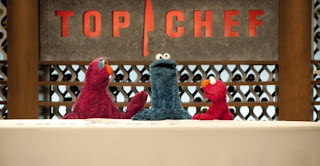 This was probably my least favorite episode of the season. Look, I have no problem with the nature of this type of challenge; some of Top Chef's best moments have been born of episodes where the chefs are ridiculously restrained, whether being forced to cook out of vending machine, a convenience store, etc. Had this challenge occurred earlier in the season, I probably wouldn't have minded it, but this late in the game, it just felt terribly, terribly gimmicky. We are left with some of the best chef's in the show's history (and Mike Isabella) and instead of focusing on cooking food they have to zip around Target grabbing knives and folding tables.

Plus, the entire challenge was just one enormous, blatant product-placement commercial, obvious even by Top Chef's standards (a show that has never, ever been shy about product placement). I mean, I love Target, but jeez, I just felt dirty after watching this (I wondered aloud if Padma and company went home after filming this episode and took a long shower, to which my wife remarked, "yeah, they probably showered in all the money they got for it"; you win this round, Mrs. Teebore...). I've never been a big Angelo guy (though his bizarre-ness has grown on me) but he's clearly a talented chef. I feel bad that he was sent home this late in the competition because he was too tired from shilling for Target to to not eff up his dish.

As for the quickfire, look, having Cookie Monster judge a contest involving cookies is cute and all, but again, this late in the game? These chefs are showing up prepared to cook for award winners and master chefs and instead have to prepare food for something that's not quite a mop and not quite a puppet? I dunno, maybe I'm just taking this all too seriously, or the cold medicine is making me cranky, but I would have at least liked some idea of how the judging was being done. I mean, I assume that the operators of the Sesame Street puppets were the ones actually eating the cookies, and their remarks on the quality thereof were their own, filtered through their puppets. Yes, it would have ruined the illusion somewhat, but honestly, who, except for real little kids (who probably aren't watching Top Chef anyway) honestly thought the puppets themselves were judging? Drop the curtain, so to speak. We're not fooled. Because I'd had to think that Dale won that quickfire based solely on the way his cookie felt against the hand of the guy operating Cookie Monster...
Newer Post Older Post Home
Posted by Austin Gorton at 8:00 AM