Yay, Retro Reviews are back! 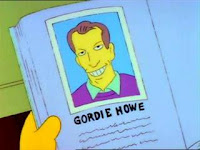 Or the One Where
Bart answers a personal ad placed by Mrs. Krabappel.

The Setup
After yo-yo mania sweeps the school and Bart breaks the class fish tank doing a trick, he is sentenced to several weeks detention, during which he discovers Mrs. Krabappel's personal ad.

Notable Notes
Bart sends Mrs. Krabappel a picture of hockey star Gordie Howe when posing as Woodrow; originally, the writers had wanted to use a picture of football legend Johnny Unitas but the show was unable to get the rights to use his image for free.

The B plot of this episode, in which Homer tries not to swear, was written in response to complaints the show had been receiving about its language.

The Minneapolis Star Tribune newspaper listed this episode fourth on their list of the top ten episodes in 2000. 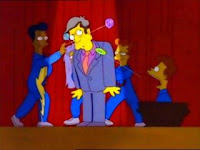 Favorite Lines
Homer: Can you believe it!? Pretty soon, I'll be able to quit my job and live off the boy!
Marge: What? Name me one person who's gotten rich by doing yo-yo tricks!
Homer: Donald Trump? ... No. Arnold Palmer? ... No. Bill Cosby! ... No. D'oh!

Homer's Love Letter (written from the Duff Brewery): Maybe it's the beer talking Marge but you got a butt that won't quit. They got those big chewy pretzels here wafntfegrhtghdmpkfgrcergr five dollars??!!!? Get outta here.

Homer: Step aside! Sensitive love letters are my specialty! 'Dear Baby, Welcome to Dumpville. Population: you.'

Bart: How about, 'Crocodiles bit off my face'?
Marge: That's disgusting! And besides, when a woman loves a man, it doesn't matter that a crocodiles bit off his face.
Homer: I may hold you to that, Marge. 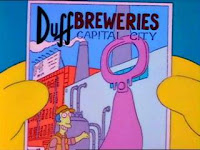 Teebore's Take
A solid Bart episode, this is also the first episode to really flesh out Mrs. Krabappel's character. We know she's a bit of a horndog (having tried to seduced Dustin Hoffman, made out with the sushi chef and hit on Aerosmith drummer Joey Kramer previously) but this episode goes into more detail about her lonely, single life. As a result, it's definitely an episode that skews more sappy than funny, but the Bart/Krabappel A story is balanced out by a hilarious B story in which Homer tries (and fails miserably) to give up swearing (there's a great sequence where increasingly ridiculous things happen to Homer, like stepping on a nail or having a beehive fall on him). And the opening bit with the yo-yo assembly is classic. The episode ends on a sincere, rather than humorous, note (the letter the family concocts together to let Mrs. Krabappel down easily, with her dignity intact, is nicely done) but there's nothing wrong with that, from time to time.

Funny and sweet, the first bonafide "Mrs. Krabappel episode" is also a nice showcase for Bart and Homer. 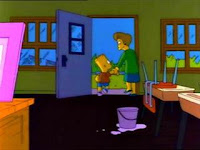