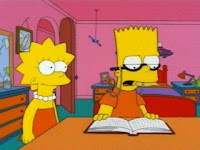 AKA: Bart goes crazy after taking a Focusyn, a new behavioral medication.

The Setup: After his antics during fire safety day destroy the school's gym, Skinner prevails upon Homer and Marge to start giving Bart a new behavioral drug to curb his misbehavior.

Hosey the Bear: You're not going to start any fires, are you?
Ralph: At my house, we call them "uh-ohs."

McGwire: Young Bart here is right. We are spying on you, pretty much around the clock.
Bart: But why, Mr. McGwire?
McGwire: Do you want to know the terrifying truth, or do you want to see me sock a few dingers?
Crowd: Dingers! Dingers! 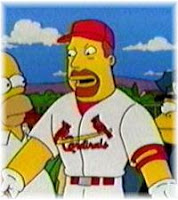 Teebore's Take: Like the previous episode, hindsight adds some unintentional humor to this episode, as the ending with a muscular Mark McGwire offering the crowd a choice between the truth or watching him hit dingers pretty much sums up the relationship between baseball and steroids around the time this episode aired. Aside from that, "Bart goes too far and alters his status at school" is a plot that's been done before (resulting in foreign exchange, expulsion, and now drugs) but even by this point the show is no stranger to recycling basic plots. The notion that Bart suffers from ADD is treated in a straight-forward manner, even offering a bit of social commentary regarding our prescription-drug crazed society, at least until Bart goes crazy and steals a tank. In the end, this remains a fairly mediocre episode: its neither terrible or over-the- top, nor is it especially memorable or funny.

Up until Bart takes a stolen tank on a satellite-shooting rampage through town, the episode plays almost like an episode of a traditional sitcom.

Jerk-ass Homer:
This is a surprisingly Homer-light episode for this era of the show.
Newer Post Older Post Home
Posted by Austin Gorton at 10:52 PM