AKA: "I Know What You Diddily-Iddily Did." (Werewolf Flanders), "Desperately Xeeking Xena" (Bart and Lisa get superpowers), and "Life's A Glitch, Then You Die"("The Simpsons" does Y2K)

The setup: The Simpson family, as they appeared in various Halloween episodes, watches a variety show featuring Kang and Kodos, at which Lisa asks "what do aliens have to do with Halloween?" and is promptly blasted by Alien Maggie.

Homer: Okay, Marge, you hide int he abandoned amusement park; Lisa, the pet cemetery; Bart, the spooky roller disco; and I'll go skinny-dipping in that lake where the sexy teens were killed a hundred years ago tonight.

Milhouse: Check it out Lisa, I'm Radioactive man
Lisa: I don't think the real Radioactive Man wears a plastic smock with a picture of himself on it.
Milhouse: He would on Halloween.

Teebore's Take: As the opening of this episode suggests, by this point in the show's run it's often pointed out that most segments of the annual Treehouse of Horror episodes are more sci-fi (or just plain whackier than normal) in nature than they are Halloween-y. I think this has less to do with the segments than it does the lack of a framing sequence.

In the early Treehouse episodes, there was always some kind of Halloween-themed sequence that surrounded the tales: Bart and Lisa telling scary stories in their treehouse, the family getting nightmares from Halloween candy, etc. The actual stories varied wildly, but the framing sequence helped make the episode on the whole feel Halloween-y. For example, there isn't anything inherently scary or Halloween-y in the hialrious King Kong parody from the third Treehouse episode in season four, but it seemed less out of left field because it was ostensibly a tale told at a Halloween party.

Once the writers did away with that particular device, the Halloween episodes just became segments with no real connection beyond the unusual or absurd, and as a result, the lack therein of anything scary, horiffic or Halloween-y became much more obvious (of course, it didn't help that has the years went by, Fox began to air these episodes AFTER Halloween more and more often).

In this episode, the first segment's parody of "I Know What You Did Last Summer" with Werewolf Flanders is easily the most Halloween-y (and the strongest of the three despite the abrupt ending) though the second segment involving Bart and Lisa getting superpowers pays lip service to the holiday by showing the kids in costume at school and has some good gags. The third segment has barely any story at all; it's rather a string of lame Y2K jokes with a bizarre ending (Homer and Bart end up on a rocket filled with Z-List celebrities heading towards the sun).

Treehouse of Horror episodes are always outside the normal realm of the show, so its hard to rate their zaniness or Jerk-ass Homer quotient. Let's just call this one two Jack O'Lanterns out of five for general Halloweeness. 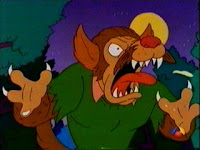