...posed last week on Comics Should Be Good:

1. How many Avengers would it take to ward off an invasion of Earth by the Martians from War of the Worlds? In the alternative, how many Justice Leaguers?

How many have a cold?

2. Who could write the best poem - Batman or Tom Strong?

3. Which Teen Titan (past or present - just so long as they’re a teenager, so teenage Dick Grayson would count) would you pick to babysit your kids?

Tough call. Starfire would probably cause my kids to ask uncomfortable questions. Donna Troy would just confuse them. Maybe Wonder Girl; she seems like the babysitting type.

But I'd probably have to go with Beast Boy, who could easily entertain the kids, or the current Robin, since he's just so darned responsible for his age. 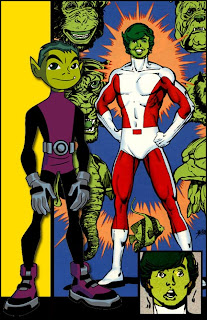 4. Who would you rather have taking a half-court shot for $50,000 (sans powers, of course) - Invisible Woman or Zatanna?

Zatanna is a stage magician, so I'd imagine her powerless tricks would afford her increased hand/eye coordination, so I'd go with her.

5. What member of the X-men would make the best President of the United States?

Do you even need to ask? 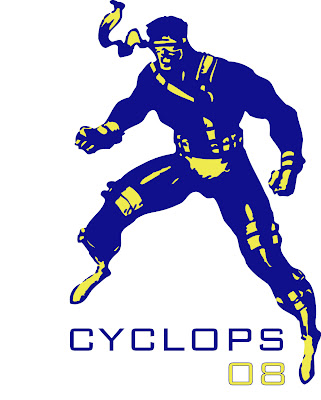 6. Who would win in a foot race (without using powers) - Colossus or Atom-Smasher? 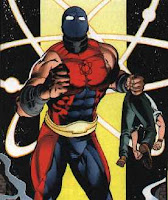 7. Who is Superman’s third-best villain (presuming Luthor and Brainiac are #1 and #2, respectively - and excluding Mxy because he seems too tame to be a villain)?

Well, in terms of pop culture prominence outside the comic book world, probably General Zod, thanks to Superman II and Smallville. But Zod hasn't been nearly as prominent within comics, so I think I'd have to go with Bizarro (who has his fair share of pop culture cache too) even if I do find his inconsistently-written "Bizarro speak" damned annoying.

Superman needs an opponent he can go toe-to-toe with, physically, so Bizarro fills that role alongside the more cerebral Luthor and Braniac. Plus, he's got that whole "dark mirror image of the hero" thematic thing going on. 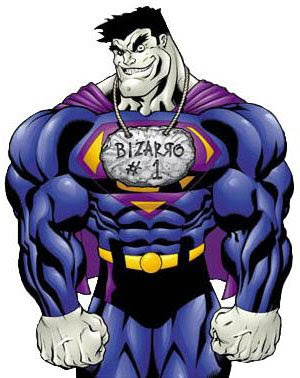 8. What Marvel hero who has never been an Avenger would make the best Avenger (legacy heroes like Bucky Cap excluded)?

Well, my first thoughts were of Songbird from the Tunderbolts and Captain Marvel (Genis Vell) who were shown to be future Avengers in the excellent Avengers Forever miniseries, but perhaps that potential membership disqualifies them from consideration here.

Beyond that? I dunno...maybe Human Torch. He's the only Fantastic Four member who hasn't also been an Avenger.

9. What would be your ideal seven-member Justice League team?

Aw, what the hell, toss out Martian Manhunter add in Green Arrow, because I like him more.

10. Who is the coolest non-Batman member of the original Outsiders?

Katana! See, her NAME is Katana, she USES a katana...the stories practically write themselves. 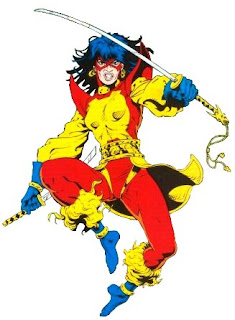 Seriously though, all the non-Batman Outsiders are pretty lame.