Villain: The episode title
Anyone know Latin so they can tell me what the hell title means? It wasn't mentioned in the episode. Eris is the Greek goddess of discord, for what that's worth, and my armchair knowledge of Descartes (cogito ergo sum) suggests that sum means "I am" or something to that effect. So something about "being discord", maybe?

Hero: Lyle dunking Elle
That was pretty funny. Go Lyle. Nice to see the overlooked Bennet getting his licks in. 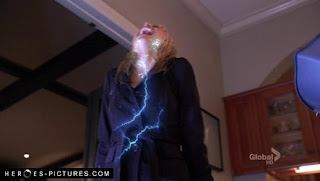 Villain: Elle on a plane
Claire seems to have taken over Hiro's job of doing something dumb every week. Look, I get that the writers needed Claire and Elle to physically get to where the main narrative is quickly, but they could have just dropped them in front of Pinehearst and let us fill in the blanks instead of showing us that Claire was stupid enough to bring an electrically out-of-control Elle on a plane, endangering the lives of all those passengers, even going so far as to taunt Elle while they're flying. The payoff of that scene, Claire and Elle's sisterly bonding as Claire takes the brunt of Elle's power, wasn't worth the idiotic setup. And really, if Elle had just let go of the metal arm of her seat, she probably could have dispersed the electricity as well as Claire did. 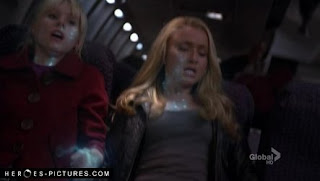 Hero: Claire is involved in the main narrative
I often feel that Claire, a continent away, often ends up removed from the main narrative of the show and gets saddled with lackluster subplots and lame characters (*cough* Wes *cough*) so I always appreciate it when she finds her way back into the main narrative and hangs out with her birth family.

Hero: Parkman does good
Hey, Matt the loveable doofus did something effective! And he showed just the right combination of sorrow and nonchalant-ness at the news of his father's death. I'm just hoping he's already aware of Daphne's double-cross (although, honestly, Parkman automatically trusting her enough to NOT read her mind and see that wouldn't surprise or anger me much). 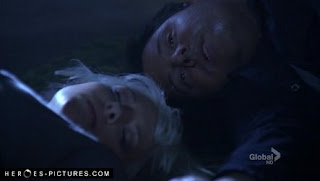 Villain: Sylar gets whomped again
I was a little disappointed that Sylar was taken down so easily by Mohinder. First he was beaten to a pulp by Peter last week and now this. I'll take back this criticism if Sylar not fighting back against Mohinder was part of the "infiltrate the bad guys" stratagem suggested by his slowing of Peter's fall. 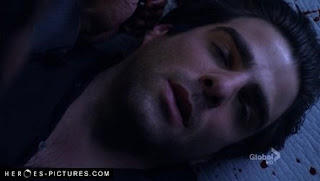 Hero: Maya gone for good
Hopefully her amends-making will occur firmly offscreen, making this the last we'll see of the irritatingly doe-eyed Maya. Though I have to wonder, if this was Maya's final exit, what was the point of having her in this season at all? We could have gotten the "Mohinder is becoming a monster" vibe sufficiently from his webbing of the abusive neighbor and drug dealer and subsequent attack on Tracy and Nathan. It's funny: of all the season 2 plots the producers are doing their best to ignore that I wish they wouldn't, they decided to carry over Maya, the one season 2 plot I'd like most to be ignored. 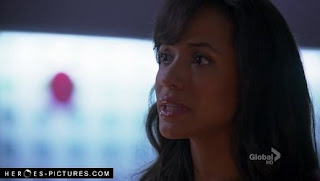 Not much to say about this one. Another steady and enjoyable outing. I'm looking forward to the flashback episode in two weeks.
Newer Post Older Post Home
Posted by Austin Gorton at 4:39 PM