Max Payne is a movie based off a video game. It's based off a video game that I have played. It's based off a video game that I liked very much. Max Payne is a movie that I did not like very much...or at all.
No matter the genre, a movie must meet some minimal standard for me to like it. And the most basic standard a movie must have is a coherent plot. Depending on the kind of movie the plot does not have to be rich or deep, it doesn't have to complicated, and it doesn't even have be the strength of the movie for me to enjoy the movie. But what the plot must do is have one scene logically follow another. Character actions should be based on character emotions, character personality, and logical reactions to the events that have occurred in the movie. Max Payne fails to do any of those things.
Max Payne is about a police detective, Max Payne (Mark Wahlberg), who gets involved with a women named Natasha (Olga Kurylenko) who ends up getting murdered. This murder turns out to be linked to the murder of Max Payne's wife and child years earlier. Max Payne continues to peal back the layers of this crime revealing a grander conspiracy.
Of course, I've already done the plot too much justice, since 'investigating a crime' in Max Payne's world has less to do with finding clues and methodically piecing things together and more to do with him going places and doing things because the movie needs him to, not because it would be logical or reasonable. I'm also leaving out the numerous elements of the story completely left to the audience to figure out. 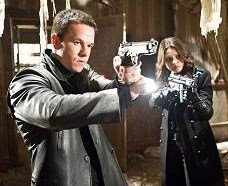 Like Mona Sax (Mila Kunis), Natasha's sister, has an occupation that is never disclosed. But she seems to get information easily enough and shows up when the movie needs her to and disappears just as quickly.
Video games are especially hard to translate into movies. At the heart and soul of most video games lies repetition. That's not to say a video game can't have different styles of game play throughout the game, but usually a player is doing a lot of the same thing. Variety in a video game is provided more by the player doing things differently than the video game changing its game play. Also, video games are almost invariably action orientated. Plot usually takes a back seat. In fact, some people have complained about some games having too much plot. Now, I'm over simplifying things, but let's just say many of games have been successful with little story and much repetition. For movies, on the other hand, high repetition and low plot is a recipe for disaster.
So going into this movie I figured that if it failed it would be because it sacrificed the plot to get to the action. However, halfway through this movie I started asking myself, "Where the hell is all the action?" So not only did this movie fail to deliver on the plot, but the action was subpar as well. Slow-mo action sequences may have been mind blowing when The Matrix came out, but these days, it's old hat. That's not to say it can't be used effectively, but if that's the only trick up your sleeve, you aren't going anywhere. And I guess that's the best way to describe this movie. It went nowhere. 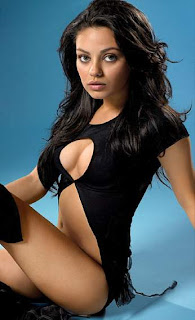 The Good: Uhhhh...hmmmm....ummmm....Mila Kunis is hot? Although she was entirely too clothed in this movie. (But I'll make up for that fact with the picture to the right which is, unfortunately, NOT from the movie.) Mila Kunis may be the most underrated hotty in Hollywood. And after writing that sentence I feel like my chances of one day writing for Maxim just got slightly better.

The Bad: Wasn't the whole review above just to the bad? Of course, a lack of nudity also hurt this movie. Hell, nudity is about the only thing that could've saved it.
I will say that it was also bad that the ending seemed to make a pro-drug statement. Drugs made Max Payne stronger, faster, and nearly invincible. Trust me, that wasn't part of the game.

The Disappointing: Yet another video game movie flopping. There really hasn't been a great video game movie yet. And every video game movie that comes out and fails leads to more and more people besmirching one of my favorite mediums. You may not believe me but there have been times where art and video games have met. So now I must cross my fingers and hope that the 2010 Bioshock movie can come through for me and video games as a whole.

Hey, this movie extolls the virtues of heavily addictive drugs. So liquid cocaine seems like a natural pairing for this movie. Plus, the drink is so strong you might get the added bonus of passing out and missing the majority of the movie!
Newer Post Older Post Home
Posted by Dr. Bitz at 11:12 PM