Villain: Mohinder? Still a moron
Mohinder's "hunting" in broad daylight now? Are we supposed to believe he dragged that bleeding drug dealer all the way back from the park without anyone noticing? 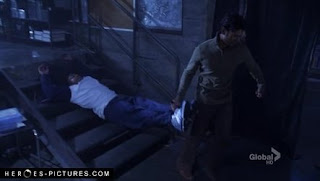 Villain: Claire jibber-jabbering with Stephen
Putting aside the fact he turned out to be an okay guy, it was pretty stupid of Claire to taser Stephen into unconsciousness then wait around for him to wake up so she could begin a dialogue with him, when, as far as Claire knew at that time, he was a very dangerous, very powerful individual.

It's a perfect example of what Heroes does all the time: frustrate me by making characters act like idiots just to setup a scene, but then that scene ends being so good it almost excuses the plot-hammering necessary to get there. As annoying as it was to have Claire start up a chat with this "villain" it's almost worth it, because then we got the loaded moment when Sylar saves Claire while Bennet looks on, helpless, and the scene in which Bennet further morally compromises himself by trying to get Stephen to get rid of Sylar, which ends with Stephen basically saying "screw you all and your crazy world."

So, in short, I guess I'm saying Heroes is very often a case of bad setup/good payoff. 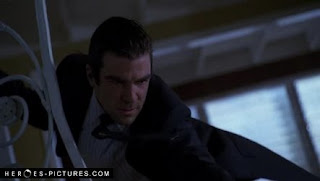 Hero: Adam's escape
I thought it was very clever (and a good illustration of his character) the way Adam orchestrated his escape from Hiro and Ando, even making sure Hiro got knocked out, to prevent him from stopping time or teleporting after him.

Villain: Hiro allowing Adam to escape
Of course, the flip side is that while it was a good moment for Adam, it was another idiotic moment of buffoonery for Hiro, who's had his arc this season weighed down by too many such moments already. And it's further compounded by the fact that Hiro neglected to stop time when searching for Adam. I'm desperately missing the sense of gravitas that Hiro's character had at the end of season two.

Hero: Pinehearst
In a season all about the duality of heroes and villains and the accompanying moral ambiguity, I definitely like the idea of a second company working in opposition to the company we already know (and love?). The presence of several of the existing Company's founders within Pinehearst recalls the rift amongst the founders established back in season two. Also of note, the fact that Hiro's dad and Ma Petrelli had an affair and were the ones guarding the split formula that Pinehearst is trying to re-acquire, is made all the more interesting when we discover that the group trying to unite that formula is being led by Ma Petrelli's husband.

The Pinehearst revelation brings us closer to Ma Petrelli's vision from earlier in the season (in which Knox, Adam, Papa Parkman and an Ali Larter attacked the Company) and it begins to set up last episode's future hit squad. Also, in that episode, President Nathan gave his speech outside the Pinehearst building, in front of their own double helix symbol, suggesting he'll soon become affiliated with this rival company as well.

Hero: "If God didn't give us these powers, then who did?''
"A doctor in Reseda California"
Tracy's deadpan response to Nathan's rhetorical theological question cracked me up.

Hero: Synthetic powers
I like the idea that some people received their powers naturally and some synthetically. Assuming Peter and Sylar's abilities are natural, the fact that Nathan was given his power possibly explains why he has a completely different power from his similarly-powered brothers. Is the Company formula the same as Mohinders, that is, is the power a person receives from it a crapshoot, or is there some control over what power they get?

Also, I wonder if this reveal has something to do with Sylar's comment to Claire in the first episode, that she's not like the others. Perhaps all the brains Sylar examined up to that point controlled either entirely synthetic or natural powers, and Claire's was the first of the other kind he'd ever seen?

Hero: Mohinder webbing Maya
Finally! Moronder does something worthwhile. His webbing up of Maya (hopefully for good) is the best thing his character has done all season.

Villain: Stephen "Vortex Man"
While I was pleased to see that "the Level 5 escape" plan plot hasn't been abandoned, I was a bit dissapointed that the first awful, unconscionable"villain" we meet turns out to be a pretty decent guy. I realize the significance of this character to the overall story and to the development of several other characters (Claire is learning the world can't easily be divided into good and evil, we get a sense that Bennet might still be a Company man at heart: its the power you have, not the way you use it, that makes someone evil) but I'm still waiting to see a specific example of the extreme evil that's escaped from Level 5.

Hero: The creepy-ass "Puppet Master"
Though the creepy-ass Puppet Master Firemommy encountered is definitely a step in that direction. I'm excited to see how his story plays out. After all, a whole lot of evil can be done by someone without a flashy and destructive power. 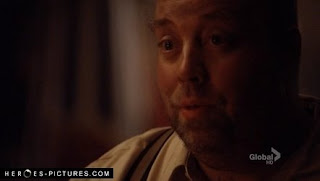 Hero: Linderman revealed
Turns out Linderman is a telepathic image created by Papa Parkman. That was revealed surprisingly fast. I don't automatically appreciate it anytime a mystery is solved quickly, but this is definitely one for which the speedy resolution is appreciated. There remains the question of how exactly Nathan recovered from his gunshot wounds; Linderman clearly didn't do it. It sounds like the show is sticking with the "Nathan believes God did it" answer for now, and for the time being, that's fine with me. 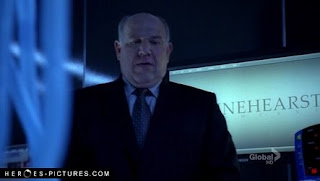 Villain: NBC's marketers
The creators clearly meant for the big reveal at episode's end of a still-living Pa Petrelli to be surprising and shocking to the audience. It would have been, if the numerous commericals created by NBC's marketing department hadn't trumpted his return so loudly during the preceeding week. 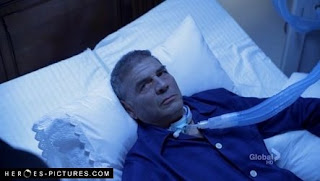