AKA: Homer gets a job as a food critic.

The Setup: Homer accompanies Bart and Lisa on a field trip to the Springfield Shopper newspaper where his phenomenal sense of smell and love of food at the current food critic's retirement party catches the editor's (Ed Asner) attention and garners Homer a tryout as the new critic.

Skinner: Now, I'd like to ask each child to pair up with a buddy so no one gets lost.
Bart: Come to think of it I haven't seen Uter since the last field trip.
Skinner: Uter? I don't remember any Uter. Silly name, Uter.

Editor: Hey listen, I just had a thought. We're looking for a new food critic. Someone who doesn't immediately poo-pooh everything eats.
Homer: No, it usually take a few hours.

Lisa: Wow, my first published article...although someone else's name is on it.
Homer: Welcome to the humiliating world of professional writing. 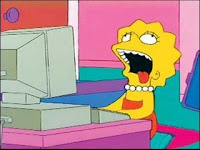 Teebore's Take: It's yet another "Homer gets a new job" plot. Get it used to it; that device isn't going anywhere. While this new job is one of the more realistic and sensible ones for Homer to acquire (food critic makes a heck of a lot more sense than trucker or Naval reservist) the episode is fairly pedestrian and not all that funny. As with "Brother's Little Helper" the opening setup contains most of the humor; by the time Homer is ditching Lisa and writing intentionally scathing reviews, the funny stuff is harder to come by.

Between Springfield's restaurateurs suddenly becoming willing to kill and the giant, pulsing deadly eclair, this is the zaniest and most over-the-top episode of the season so far.

The last 2/3 of the episode are a textbook case of jerk-ass Homer: after using Lisa to write his reviews for him, he casually dismisses her when she won't help him be intentionally negative. Homer then goes on a power trip, swearing he will never receive his comeuppance, before getting saved by his family at the end from the vengeful restaurant owners. At that point, it's a wonder they even bothered...
Newer Post Older Post Home
Posted by Austin Gorton at 10:55 PM