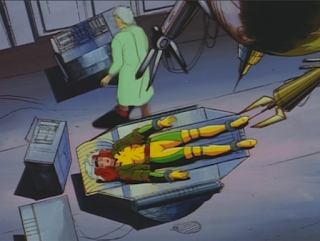 Plot
In Switzerland, Warren Worthington and his girlfriend are attacked by Cable, who is looking for Dr. Adler, the scientist responsible for the power-suppressing collars used in Genosha. Warren is able to fight Cable off, but, believing his girlfriend has rejected him for being a mutant, he flies off.  Meanwhile, at the Muir Island Research Center, Professor X tries to meet with Dr. Adler, but is rebuffed, and receives visions of a strange being when trying read Adler's mind. Xavier then contacts the X-Men and tells them about Adler's purported "cure" for being a mutant. Rogue, unhappy with her inability to touch anyone, flies off for Scotland to investigate. She encounters Pyro & Avalanche at a local pub, waiting for Mystique; after a brief scuffle with them, Rogue forces her way into Adler's facility, demanding the cure; he tells her to return in an hour, then transforms into Mystique, who is told by her secret master, Apocalypse, to user Adler's machine to make Rogue his slave. Later, Adler begins the process on Rogue, but is interrupted by Pyro & Avalanche, who kidnap him. As Cyclops and Jean arrive & meet with Xavier, worried that Rogue wants the cure, Rogue attempts to rescue Adler, but is stopped by Cable. When he attempts to kill Adler, Mystique reveals herself. Just then, the X-Men arrive, and Mystique shifts back. The X-Men attack Cable, attempting to save "Adler". Both Cable & Jean get thrown over the cliff, but while Rogue saves Jean, Cable disappears. Back at Adler's lab, Rogue helps repair his machine, but declines to use it, having come to appreciate her mutants powers for their capacity to help people. She meets Warren on the way out, who has arrived to receive the cure himself. Later, Mystique reveals to Apocalypse that Warren is actually a mutant. Apocalypse says he already knew this, as he knows more about the world than she can imagine, which is why it must be destroyed.