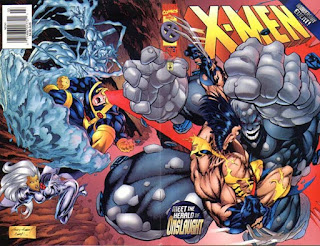 In a Nutshell
Cyclops, Storm, Iceman & Wolverine are captured by Post, herald of Onslaught!

Plot
Waking up in a strange location with no memory of how they got there, Cyclops, Storm, Iceman & Wolverine are shocked by the apparent damage they've sustained: Cyclops is missing his visor, while Iceman is missing a sizeable chunk of his chest. Back at the X-Mansion, Xavier awakens to find Gateway on the verge of teleporting him away. Quick action from Bishop & Phoenix knock out Gateway. Meanwhile, Wolverine senses the presence of a cloaked figure, and is able to force a mutant named Post to reveal himself. He briefly battles the X-Men, stating that Onslaught is impressed, before re-cloaking himself. At the X-Mansion, Xavier & Jean attempt to telepathically interrogate a revived Gateway, but are unable to do so, and the assembled X-Men are probed by a violent psionic entity. As the missing X-Men continue their fight with Post, Beast reasons they were captured specifically because their powers are not psionic in nature. Just then, Cyclops & Wolverine are able to pierce Post's armor, completing Onslaught's test and sending the four captive X-Men back home.After they arrive, the psionic entity addresses Gateway, telling him that while he thought these beings would serve as the last line of defense against the coming danger, he was wrong. Their victory today was minimal at best: Post was the weakest of Onslaught's emissaries, and his coming will be the X-Men's devastation!

Firsts and Other Notables
A double-sized issue (with a wraparound prismatic foil cover, natch) celebrating the 50th issue of the second X-Men book, at the time, this represented the next big escalation in the ongoing "Onslaught" subplot, essentially reintroducing it after the few initial post-"Age of Apocalypse" teases and effectively beginning the ramp up towards the crossover which begins a few months after this issue, with Onslaught "himself" making an appearance of sorts as a psionic entity in the issue. 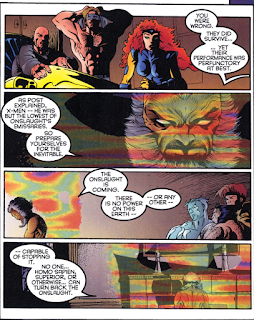 But most of the ramp-up comes by having Gateway, seemingly on the orders of Onslaught, abduct four X-Men from the mansion and bring them...somewhere....to battle Post, appearing here for the first time. Presented as a kind of emissary/herald of Onslaught, here Post is presented as a massive blue mutant with vague powers, weird plate armor, cloaking technology, and various weaponry (in later appearances, he will diminish in size to a more ordinary level, and receive a backstory that includes a past with Cable). His purpose here is to test the four captive X-Men on behalf of Onslaught, before returning them to the mansion upon his "defeat". 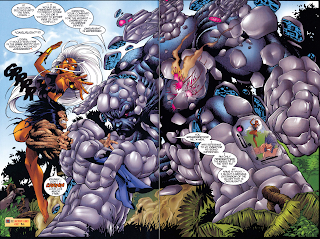 While presented here as a thoroughly dire and ominous portent of things to come, very little of this ends up tracking all that closely with Onslaught's ultimate origins and goals when they're revealed: whatever place the X-Men are taken to is never revealed, the relationship between Gateway & Onslaught is never adequately explained, and while the whole notion of "testing" certain X-Men kind of fits with the later "Onslaught is Xavier" reveal (in that it makes senses for someone born from Xavier's psyche to create a de facto Danger Room scenario), it's never made entirely clear why Onslaught is wanting to test these X-Men: he wouldn't want them stronger (and thus better able to defeat them), nor should he need to test them to know their capabilities (since, as Xavier, these are four of the mutants with whom he should be most familiar). All in all, the various teases & hints presented here succeed in tone far more than they do cohesion with the later plot points. 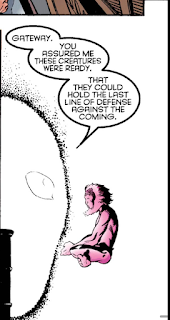 Similarly, Chamber, after being abducted by Gateway on Onslaught's orders last issue, is nowhere to be found in this one; it is said that between issues, he was returned to Xavier's School in Massachusetts, and Beast theorizes it was due to the psionic nature of his powers (part of his whole "Onslaught had non-telepaths abducted" theory). It reads very much like the writer of one issue setting up an appearance by a character in another issue, only to have the writer of that subsequent comic decide not to use the character after all, except for the fact that the issues in question are from the same series written by the same writer.

The Chronology Corner
Wolverine appears here after the "Crimson Dawn" story and between issues #96 and #97 of his solo series.

This issue takes place after X-Men Unlimited #10, meaning that the Beast appearing in this issue is actually Dark Beast.

A Work in Progress
A narrative caption suggests Cyclops is so named not only for his power, but also, the singularity of his vision for Professor Xavier's dream.

Wolverine notes that he wasn't even at the mansion when he was taken.

When Iceman wakes up in Post's realm, he has a massive hole in his chest, and wonders what would happen if her switched back to flesh-and-blood in that state. 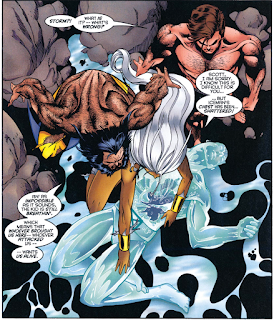 Xavier says he has been unable to pierce Gateway's mind whenever he's tried in the past, though I believe this is the first time the characters have appeared together on page.

Bishop acts in his little-mentioned capacity as the head of security for the X-Mansion in this issue. 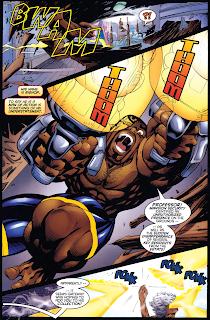 Austin's Analysis
Still operating in fill-in/placeholder mode ahead of Mark Waid's arrival, Scott Lobdell uses Adjectiveless' big (in 90s terms) 50th issue to kick the simmering "Onslaught" subplot into high gear, the beginning of an effort across the line as the the crossover draws ever nearer. Unfortunately, as a result of that, it's difficult to really appreciate this issue on its own merits, since it is so heavily built around setups & teases which ultimately fizzle out, go nowhere, or are outright contradicted (despite the fact that these setups & teases are coming only months before the crossover proper begins). In many ways, it's exhibit A in why Lobdell's complete "make it up as you go along" approach to longform storytelling isn't the best, at least when it comes to big, sweeping storylines encompassing months' of publishing time and multiple series (even before the Powers That Be latch onto the idea and turn the crossover into an entire line-wide Marvel event).

Because there's really not a whole lot to this issue when you strip it of all the build-up to/teases about Onslaught: a group of X-Men taken for random reasons fight a new foe with largely amorphous powers, everyone else speculates about where/why they've been taken, and then, at the end, the X-Men come home. The mystery - of why these characters were taken, how Gateway ties into it, what Post's connection to Onslaught is, what Onslaught is gains from this - drives the story, and very little of what we later learn about Onslaught, his goals, motivations, etc. do much to answer those questions. So all that's left is a fairly thin story in which a random sampling of X-Men fight a big blue guy with techno-scales & floating blasters. Kubert seems to be having fun, and there's some nifty visuals - like Iceman missing a chunk of his chest - and some interesting beats to the action - like Cyclops being without his visor (though Lobdell wrote a similar situation better in X-Men Unlimited #1). But for the most part, built as it is on teeing up mysteries which largely go unanswered or are answered halfheartedly, the end result feels awfully empty for what is presented as a big, meaty, narratively-important story.