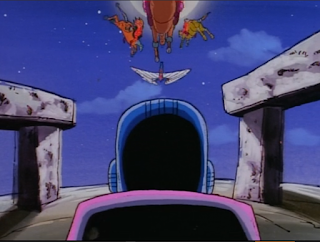 Plot
On Muir Island, Mystique begins the process of transforming Warren Worthington into Apocalypse's slave. Later, Cyclops, Jean, Rogue & Xavier gather at a nearby pub, where a group of mutants is gathered, eagerly awaiting news of Adler's cure. When Warren runs in, free of his wings, and declares the cure is a success, many in the crowd enthusiastically volunteer. Apocalypse proceeds to transform three of those volunteers into his Horsemen of War, Famine and Plague, to be led by the not-actually-cured Warren as Archangel, the Horseman of Death. Apocalypse and his Horsemen proceed to attack a peace conference in Paris. The X-Men spring into action, with Xavier sending Rogue back to Muir Island to find Dr. Adler. As Apocalypse's Horseman ravage Europe, Rogue finds Adler, and learns he is actually Mystique, who also impersonated the wingless Warren. During the ensuing scuffle, Adler's machine is destroyed & Mystique escapes, but Rogue learns Apocalypse has a base near Stonehenge. After the X-Men manage to fight off the Horsemen, they retreat to that base, followed by the X-Men, who are joined by Rogue. During the ensuing fight, Rogue touches Archangel, absorbing his rage and the power given him by Apocalypse. Appalled at what he's become, Archangel turns on the other Horsemen, prompting Apocalypse to flee. Archangel helps Rogue come back to herself, then flies off, consumed with guilt.