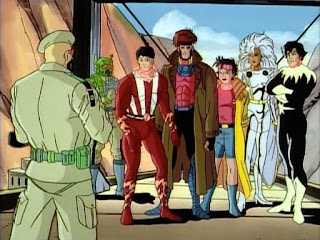 Plot
Storm, Jubilee, & Gambit are press-ganged into joining Genosha's mutant slave labor pool, using their powers to help build a massive dam & hydroelectric plant. When the power-dampening collars they all wear are deactivated for the work day, Storm immediately rebels; she is captured by a Sentinel and placed in "the Box". Meanwhile, the rest of the X-Men head off to Genosha to check-in on their overdue teammates. In Genosha, Jubilee tries to lead a slave revolt of her own, but the guards are wise to her, and she ends up in the Box as well. Elsewhere, Genoshan officials meet with Bolivar Trask & Henry Peter Gyrich, who are supplying the Sentinels via the massive Master Mold. Trask reveals Gambit turned in Jubilee; Gambit also promises to take the Genoshans to the X-Mansion. But on his way back to the prison, Gambit is able to escape, with a little help from a mercenary named Cable, who gives him a key to release the dampening collars. Gambit proceeds to free Storm & Jubilee & release the rest of the prisoners who, free of their collars, quickly overpower the guards. As Trask & Gyrich flee, Storm destroys the dam & Master Mold with it, just as the rest of the X-Men arrive. The team heads for home, but they arrive to find the professor missing and the mansion destroyed!