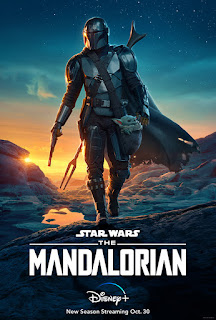 Disney finally released a trailer for the second season of The Mandalorian (a season which, reportedly, completed filming before the Covid-19 pandemic hit, preventing it from being impacted in any way by that, so whatever we're getting, it's being presented as intended), which is set to debut on Disney+ on October 30th. Here are five things of note which caught my eye from the trailer.

(And, quick note on future Force in Focus posts - my plan is to run a series of posts closing out the original Marvel Star Wars comic in the next few weeks, leading up the release of Mandalorian Season 2. Then I'll review each episode of the season as with the first, and after that...maybe something a little different, at least in terms of my approach).

Some gorgeous establishing shots throughout this trailer, most of all the very first one, as the Mandalorian's ship comes into view before revealing it's been damaged.

Is that a Jedi watching from the shadows? The narration certainly wants us to believe it is. If so, are they a post-Return of the Jedi Jedi, allied with Luke's fledgling academy? A survivor of Order 66? Or something else?

In addition to familiar settings like Tatooine (and possibly Coruscant), there's tons of little fan service moments in this trailer, from X-wings attacking the Mandalorian to TIE fighter's taking off from the ground to speeder bikes launching from the upper atmosphere.

One of the deeper bits of fan service is the presence of an Abyssin, the cycloptic alien the Mandalorian is talking to towards the end of the trailer. Abyssins were one of the species represented in the original cantina scene. They aren't as well known or discussed as, say, the Ithorian Hammerhead or the Shistavanen Wolfman, but I love when new Star Wars content uses some of the more obscure aliens.

Baby Yoda quickly closing the cover of his floating hover-crib just before the Mandalorian engages his whistling birds is the kind of cute/funny moment we've come to love from that little bugger.
Newer Post Older Post Home
Posted by Austin Gorton at 12:00 PM