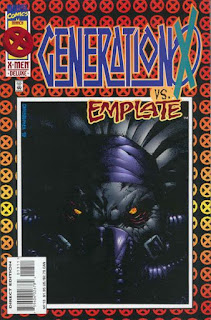 In a Nutshell
Monet stands alone against Emplate and his allies

Plot
Though shocked to find her classmates captives of her brother, Monet is able to escape from Emplate as he turns his attention to Chamber. Though Gayle objects, saying Chamber belongs to her, Emplate has them both buried up to their necks in the ground. Meanwhile, Monet is able to get a call for help out before she's attacked by one of Emplate's minions, Bulwark. As Jubilee does her best to distract Emplate and keep him from feeding on Banshee, Monet & Bulwark's fight takes into the biosphere, where Leech is able to suppress Bulwark's power, allowing Monet to knock him out. She tells Leech & Artie to stay put, then flies off, but is attacked by Vincente. As she falls to the ground choking Bishop suddenly appears, telling Monet that she called for him, and he came.

Firsts and Other Notables
Bulwark & Vincente are fully introduced in this issue, though the circumstances of their recruitment by Emplate remain a mystery. 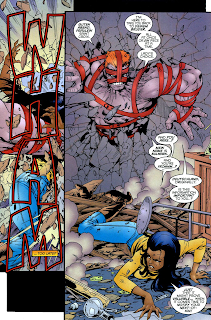 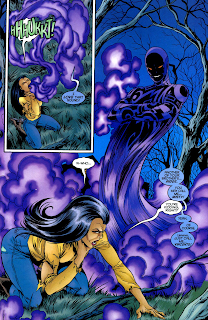 Bishop pops up at the end of the issue, having been called by Monet for help. He will stick around through the following issue. 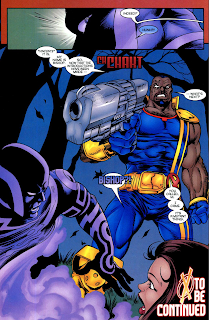 The Chronology Corner
Bishop appears in this issue and the next between X-Men (vol. 2) #52 and Uncanny X-Men #333.

A Work in Progress
Emplate says that he hadn't realized the connection between himself and Monet when he first encountered Monet, an attempt to explain his general lack of a reaction to her presence (which doesn't quite fit with what's later revealed).

This issue reveals that Emplate can temporarily gain the mutant powers of the mutants on whom he feeds. 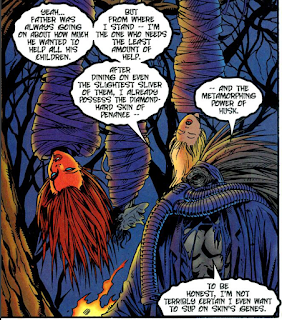 Monet tells Emplate that what happened to their mother wasn't his fault, the 90s X-books version of a vague tweet meant to tease past events without revealing too much.

They're Students, Not Superheroes
While battling Bulwark, Monet complains that she came to Xavier's School to learn about her powers, but would like more theory and less practice to that end. 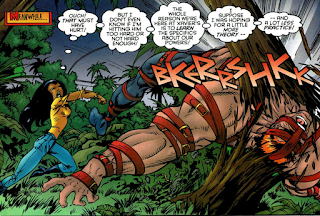 Austin's Analysis
Being the middle chapter of the three part "Return of Emplate" story, this is, like most middle chapters, mostly action. In fact, it's probably the most action-forward issue of the series yet, as most of it is spent on Monet doing a sort of light Die Hard against Emplate's minions as she attempts to call for help (Lobdell even hangs a lampshade on that fact - and the larger "students not superheroes" idea - with her thought about wanting her lessons to be less practical coming across similar to "come out to the coast, we'll get together, have a few laughs..."). Beyond Monet's efforts, there's little more here than some gloating from Emplate and the beginnings of a play by Jubilee, though Lobdell does sprinkle in some more teases regarding the Monet mysteries and the past between her, Emplate, and Penance. But, coming as it does in the middle chapter (of a story in a 90s-era X-book), they are little more than teases, with nothing concrete actually revealed. So all that's left of any substance is the action. Which is fine (Tom Grummett is more than capable of handling it), but also, doesn't spark much in terms of commentary.

Next Issue
Tomorrow, Nate Grey gets a talking-to in Excalibur #95. Friday, Cable learns just how powerful Nate Grey is in Cable #29. Next week, X-Men Unlimited #10!