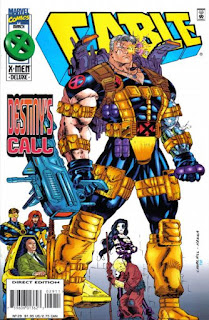 "Man in the Mirror"

In a Nutshell
After learning about his tremendous power, Cable sets out in search of Nate Grey.

Plot
Cable greets Blaquesmith, who has come to the X-Mansion for a summit to discuss Nate Grey along with Professor X, Cyclops, Phoenix, and Moira MacTaggart. Moira shares information on Nate culled from their recent encounter, and theorizes that his power levels may rival or exceed that of Dark Phoenix. This sparks a series of discussions, but given the dearth of information about Nate's origins. they quickly reach an impasse. This prompts Blaquesmith to freeze the discussion, wiping all memory of it from everyone's minds except for Cable and him. Cable is upset, but Blaquesmith insists it's better that fewer people know of his existence. Cable resolves to go after Nate alone, but makes Blaquesmith promise that if he doesn't return, Blaquesmith will unlock everyone's memories of the day. Blaquesmith wishes Cable a good journey, then Cable departs for a confrontation with X-Man!


Firsts and Other Notables
This issue is a prologue of sorts to the Cable/X-Man crossover that will run through issues #30-31 of this book and X-Man #14, with Cable determining Nate to be, at the very least, someone he needs to meet and learn more about, in order to ensure he doesn't use his power for evil purposes.

The opening credits include a blurb cross-selling the Askani'son limited series.

Moira journeys to the X-Mansion to participate in the Nate Grey summit (after her encounter with him in X-Man #12/Excalibur #95, and maybe this is just the pandemic talking, but it sure seems foolish of her, someone infected with a deadly communicable disease, to be traveling across the Atlantic (even if she is traveling solo via high tech superhero jet or whatever, which, maybe she is, we don't know), especially when the X-Men already have teleconferencing technology far beyond Skype or Zoom (for those of you reading this is in a (hopefully) post-pandemic future, I am writing in the midst of the Covid-19 pandemic of 2019-2xxx). 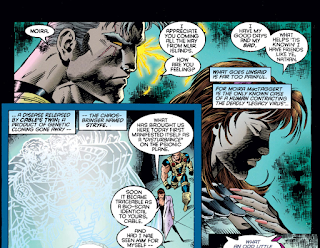 After Cable objects to Blaquesmith wiping minds like he's Silver Age Professor X, Blaquesmith notes that they've altered people's memories before, which seems like a hint towards a future revelation, though as far as I can recall, nothing really comes of this (and it is somewhat Mary Sue-ish that Blaquesmith is capable of telepathically altering the memories of Omega-level telepaths like Jean Grey & Xavier). 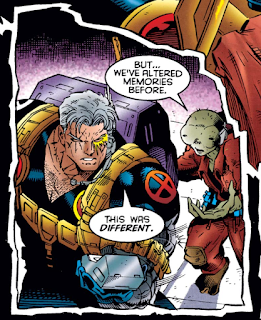 The issue concludes with a Cable/X-Man pin-up teasing the upcoming crossover. 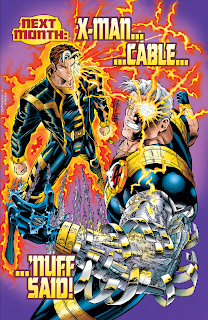 The Chronology Corner
Cable appears here after X-Force #51, and next in the closing pages of X-Man #13.

A Work in Progress
Walking through the X-Mansion, Blaquesmith spots a baby picture of Cable, noting he's never seen him unblemished by the TO virus.

X-Force is shown briefly training in the beginning of the issue, which leads to a confrontation between Blaquesmith & Sunspot, in which Blaquesmith learns that Sunspot knows the Askani language; X-Force & Sunspot have their encounter with Blaquesmith wiped from their memories too. 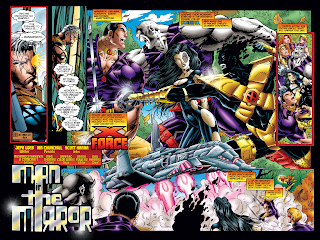 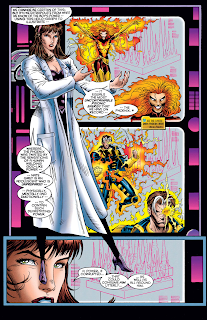 Cable learns Blaquesmith has been tracking Nate since his arrival in the 616 universe.

The Grim 'n' Gritty 90s
The PowerPoint presentation on Nate Grey includes some more of those CG 90s orbs. 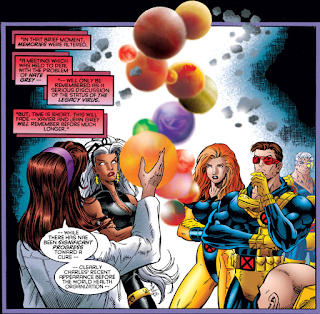 Austin's Analysis
With regular series artist Ian Churchill only penciling one of the previous three issues, it's a bit surprising he was brought back for this one - an issue which mostly consists of people standing around talking - rather than one in which there's action and things happening. A transitional issue between the three-part Genosha arc and the upcoming crossover between this book and X-Man, this is almost entirely dedicated to the notion that Nate Grey is supremely powerful, in need of handling, and that Cable and Cable alone can do it (the better to keep the crossover relatively contained, what with bigger crossovers on the horizon), all of which is told, more or less, through a series of high-tech PowerPoint presentations. Loeb tries to work an emotional throughline into the meeting via the prickly relationship between Blaquesmith & Cable, but there's not much there here, in terms of that relationship, or the issue as a whole.

Next Issue
Next week: Dark Beast pulls a switcheroo with Regular Beast in X-Men Unlimited #10!