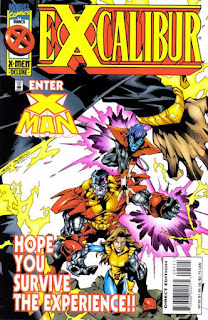 In a Nutshell
Nate Grey gets yelled at by Moira.

Plot
Following an explosion, Excalibur converges on Muir Island's communications room, where Nate Grey is accusing Moira MacTaggart of running a shady operation to experiment on mutants. But Moira stands up for herself, and admonishes Nate for consistently reacting to half-truths from untrustworthy sources. She opens her mind to him, and he sees the truth: that his own powers - not Moira or Xavier or anyone else - will kill him before he turns 21. Excalibur then tries to calm him down further, allowing him to read all their minds to show him their commitment to helping mutants and improving the world. Convinced he was in the wrong and that neither Moira nor Excalibur is out to get him, he flies off, leaving Moira to wonder if he'll live long enough to ever return.

Firsts and Other Notables
Carlos Pacheco, fresh off working with Warren Ellis on the Starjammers limited series, comes aboard as the series' new regular artist (along with inker Bob Wiacek), though during his run, he will serve in more of a Marc Silvestri/Rick Leonardi-style workshare with Casey Jones. Even though he ultimately only draws a half-dozen or so issues, I always think of Pacheco as the definitive artist of Warren Ellis' run (to the point where I have to remind myself there's a lot of Ellis-penned issues in the series before he shows up).

The conclusion of the crossover with X-Man which began in X-Man #12, this issue sees Moira lay into Nate for going off half-cocked based on Spoor's manipulations and automatically assuming the worst based on a few words or a brief glimpse into someone's mind, and "stern talking to" is pretty how he's defeated this issue. It's...kinda the best. 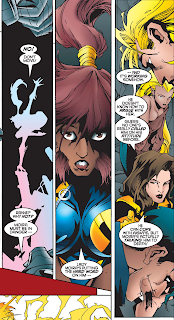 The other thing done to help him calm down is Excalibur opening their minds to him, to show that they have good intentions, and the result is a splash page in which each character's motivation for being part of the team is stated, and it's pretty well done (in terms of representing each motivation consistent with established characterizations, though I'm not entirely sure what the difference between Nightcrawler & Kitty's motivations are). 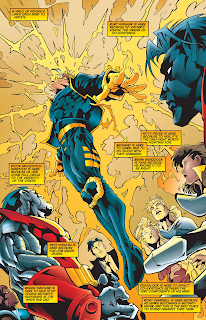 A Work in Progress
Wisdom is up and about as the issue opens. 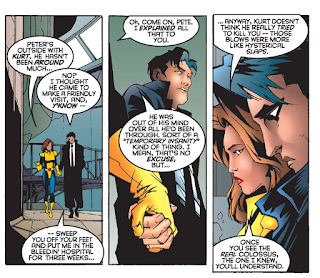 Narration notes that Brian is a retired superhero, which is, I think, the first time this run has explicitly stated that he's meant to be serving in more of a support role than going out and punching things as Captain Britain (but regardless, that doesn't really last for long).

Rory specifically stays away from the fight with Nate, worried about being adversely affected by a mutant and thus furthering his transition into Ahab.

Artistic Achievements
Pacheco fills a lot of pages doing recaps, including a "about Excalibur" page... 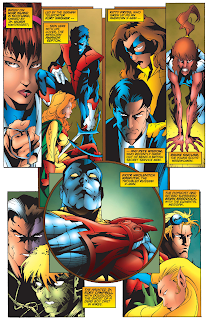 And another which recaps the last half dozen issues of X-Man. 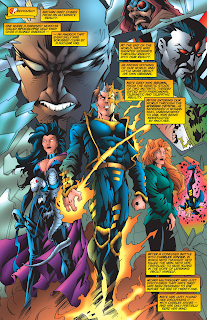 He also does a page on Proteus and Phoenix, when Moira is explaining to Nate her experience with mutants consumed by their vast powers. 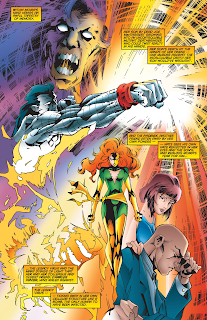 The Grim 'n' Gritty 90s
In one panel, Pachecho turns in a decent shot of the original X-Men in their graduation uniforms, marred by some unfortunate CG orbs floating around for some reason.

Austin's Analysis
I think this might be the best post-AoA comic featuring Nate Grey yet.

Granted, he doesn't actually do much in it but get right and proper yelled at for being an over-reactive, petulant brat, but really, that's what makes it so enjoyable! Warren Ellis probably didn't intend it to be so, but it sure is cathartic to read Moira giving him the riot act as she admonishes him for rashly acting on half-truths gleaned from brief glimpses into the minds of untrustworthy characters. It's as though Moira (and Ellis) have been reading the same issues we have, and finally had to say "enough is enough with this nonsense!". It's eminently enjoyable.

In other happenings, Carlos Pacheco arrives as the new series artist, which helps elevate this quite a bit as well. His work here is still a little raw and stiff - it helps that much of this issue is presented via big single or double page spreads featuring largely static images and/or recreations of past events - but there's a great energy to his work even in the static, more pin-up-y images that really defines this period of his style (his more recent stuff is much more polished, but less wild & energetic). All in all, it's not an issue in which much happens - Nate gets yelled at, accepts that Excalibur are the good guys, then leaves - and thanks to all those big splashes, it reads pretty quick, but it's entertaining nevertheless - and highly cathartic, to boot.

Next Issue
Tomorrow, Cable attends a PowerPoint session on Nate Grey in Cable #29. Next week, Dark Beast makes a move in X-Men Unlimited #10!