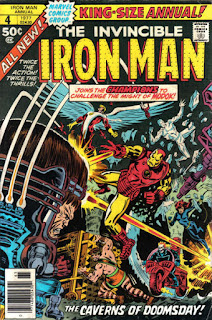 In a Nutshell
The Champions team-up with Iron Man to battle MODOK!

Plot
Iron Man tracks MODOK across the country to an AIM base in Nevada. MODOK is gone, but Iron Man discovers an energy cradle which is relaying energy from the West Coast to another facility, causing a blackout. Seeking help from some old Avengers teammates, Iron Man heads to the Champions' headquarters, but is unable to contact them due to the blackout. When he lands inside, he attacks Ghost Rider, suspicious of his appearance, but Black Widow soon puts an end to their ensuing fight. Iron Man explains the situation, and the heroes agree to split up and search out three nearby AIM bases for the captured energy. Black Widow, Hercules & Angel investigate a base in the redwood forest, and are captured by AIM agents. Iceman, Darkstar & Ghost Rider check out an undersea base in San Francisco Bay, where they are attacked by mutated sea creatures and Darkstar is injured. Iron Man checks out an abandoned mission in the Mojave desert, front for another base, and is attacked by Stryke, a biologically-enhanced AIM agent, making him realize he's been setup. He heads back to the Nevada base, contacting the Champions to meet him there. Black Widow's group, which had faked their defeat, break free, while Iceman puts Darkstar on life support inside the Champscraft en route to Iron Man's location. Inside the base, they discover MODOK channeling the stolen energy into his Doomsday Chair, boosting his mental powers. Iron Man manages to fight him off, but MODOK destroys the base, trapping Iron Man and the Champions. As Hercules holds up the rubble of the base, Iron Man supercharges his armor with the lingering energy from the energy cradle to blast them free. He flies off after MODOK and, hitting him with the repurposed energy, accidentally destroys him.