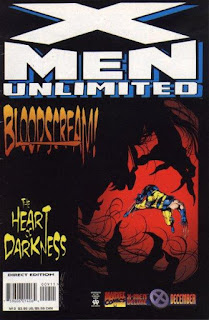 In a Nutshell
Wolverine, Beast, & Psylocke battle Bloodscream & Belasco in the Bermuda Triangle.

Plot
After Lee Forrester encounters her thought-dead crewman Paolo raving about a vampire pirate, Wolverine, Beast, & Psylocke travel down to Florida to investigate. Heading out to sea with Lee & Paolo, they are attacked by Bloodscream, leading a crew of "zombie" pirates, local sailors he's impressed into his service. Bloodscream calls off their battle when he spots an island encased in magic. The X-Men follow him and discover their one-time base, the island in the Bermuda triangle which also servers as a nexus point to Limbo. Just then, Belasco emerges and captures the X-Men. He then opens the N'Garai cairn, intending to tame the demons inside and unleash them on the world, something which doesn't sit right with his ally, Bloodscream. The X-Men break free and attack Belasco, and Lee manages to shatter Belasco's power crystal with a shot from her rifle, at which point Bloodscream attacks his master, pushing them both into the cairn. The X-Men and Lee then escape, just as the island itself is pulled into the N'Garai dimension. Stranded in the ocean, they float on a discarded palm tree until they're spotted by Lee's ship and rescued.

Firsts and Other Notables
Elizabethan-era vampire Bloodscream is essentially the main villain of this story (or at least the first encountered by the protagonists); he last appeared alongside robot Wolverine Albert & walking pun Elsie-Dee in Wolverine #86, but turns up here alone, in service to Belasco and working to impress sailors into his crew of zombie pirates. 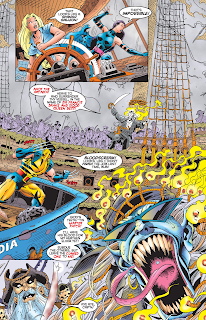 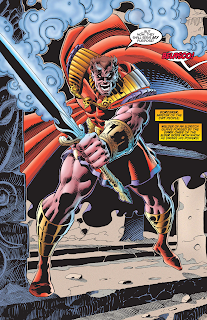 He is working out of the mystical, Lovecraftian island in the Bermuda Triangle which once served as both Magneto's and the X-Men's base of operation (after the latter ousted the former from it). It is the place where young Illyana Rasputin was pulled into Limbo and emerged seconds/years later, a teenage sorceress. 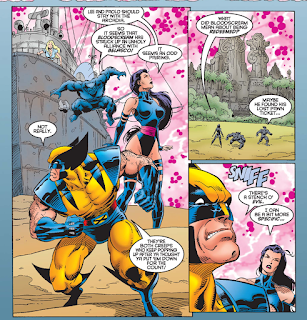 Belasco intends to open the N'Garai cairn, the dimensional portal to the home realm of the N'Garai demons (who have menaced the X-Men in X-Men #96, #143 and Wolverine '95). It's not entirely clear if the cairn he's hoping is meant to be the one from the X-Men's lawn (that he's accessing directly through a portal of his own) or one just like it. 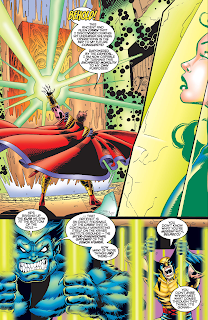 Both Belasco & Bloodscream end the issue in the N'Garai dimension; Bloodscream will next appear in Wolverine #123, while Belasco turns up shortly in Excalibur.

Lee Forrester is on hand for this story as well, having recently encountered Belasco herself and having washed up on the Bermuda Triangle island alongside Cyclops in Uncanny X-Men #145. 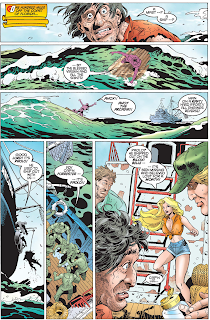 She is pulled into the story when she finds her former crewman Paolo adrift in the ocean, having been attacked by Bloodscream (despite Paolo apparently being killed by Senyaka in Cable #11).

This is the first issue of the series to not include any pinups or other backmatter following the main story.

Also, Psylock rides a shark at one point, and that's not nothing.

Creator Central
Art comes from Val Semeiks, his first major work on an X-book. He'll bounce around the X-office a bit doing fill-in stuff and one-off issues like this (mostly on Wolverine, where he'll be one of the artists who helps bridge the gap between Adam Kubert and Leinil Yu).

The Chronology Corner
This story takes place before Uncanny X-Men #328 and Uncanny X-Men '95. Wolverine appears between issues #96 and #97 of his series.

A Work in Progress
Wolverine walks from New York to Florida, a repeat of similar behavior in Wolverine #94 (in which he walked to the Xavier School in Massachussetts from the X-Mansion), though of an appreciably  larger distance here (I guess everyone just waited a couple weeks for him to get there before going out after the apparent pirate vampire plaguing the seas).

Austin's Analysis
Oof, this is a mess. On the surface, Hama playing around in the nooks and crannies of X-history is the kind of thing that usually deserves to be applauded, but for whatever reason, Larry Hama's efforts here are haphazard, at best. It stumbles right on the first page, with Paolo going from "dying a visceral and highly visual death" in Cable #11 to "lost at sea", so as to setup the return of Bloodscream (I'm willing to ignore the sheer coincidence of Paolo being found by his former boss within within the vastness of the Atlantic Ocean, as that's at least a Lee Forester tradition). From there, we get an ad hoc team of X-Men with little narrative or thematic connection to the characters in the story or events being referenced; even in this era in which the lines between the various teams are blurred and characters are routinely selected for involvement in stories seemingly at random, this assemblage sticks out: Wolverine makes sense (Larry Hama is writing this, Wolverine has a history with Bloodscream, and it's 1996), but Beast & Psylocke, less so (neither have ever, as far as I can recall, even met Lee Forrester). Together, the trio and Lee face off against Bloodscream, who appears here with no attempt to explain how he got from tracking Wolverine to Tibet in the wake of "The Phalanx Covenant" with Albert & Elsie-Dee to his role as a pirate impressing sailors into his zombie crew here.

Then, the heroes end up on Magneto's old Lovecraftian island in the Bermuda triangle, and everyone seems to forget that as much as it's a pathway to Belasco's realm, it was also technically the X-Men's base of operation for a hot minute (publication time, but they did move their stuff down there), including Wolverine, the one member of this trio who was with the team at that time. Furthermore, Belasco tries to use the N'Garai cairn to take control of the demonic race, another cut of X-Men lore, but yet another which largely ignores past stories. In this case, Wolverine '95, published only a few months earlier (and also written by Larry Hama!), in which Wolverine (present in this issue, remember) journeyed to the realm of the N'Garai and decimated their ranks, goes unremarked upon.

One or two of these discrepancies/slipshod references could be overlooked; such lapses are hardly limited to this issue, especially around this publication time. But taken together, they overwhelm everything else, especially when "everything else" is so unremarkable. If the art and writing were stronger, it'd be easier to overlook the glitches. But between Lee and the whacky Bermuda Triangle island and Belasco and the N'Garai, Hama's focus seems to be on these callbacks to X-lore, and there's very little else to latch onto. A story devoted to calling back X-history is by no means an inherently bad thing. But in order for it to succeed, those callbacks have got to be handled better than they are here.

Next Issue
Next week the Starjammers get another limited series, this one from Warren Ellis & Carlos Pacheco!