Plot
As the Mandalorians take Gar Saxon and his rebels into custody, Ahsoka joins a call with the Jedi Council, informing them of Maul's capture. Later, she bids goodbye to Bo-Katan as she and the rest of the 501st board a transport to bring Maul, locked inside a Mandalorian Vault, onto their Star Destroyer for the trip back to Coruscant. Later, as the ship is traveling through hyperspace, both Maul & Ahsoka sense a disturbance in the Force. Moments later, Rex receives a holographic message from Chancellor Palpatine, telling him to execute Order 66. As Ahsoka approaches to tell him about her premonition, he manages to utter "find Fives" before he and the rest of the clone troopers open fire on her. She manages to escape, then prevents Maul's extermination at the hands of the clones, setting him free in order to serve as a distraction. As Maul attacks the troopers, Ahsoka, with the help of A7 and two other droids, follows Rex' clue to learn how Fives discovered the presence of inhibitor chips which turn the clones against the Jedi. She then manages to capture & stun Rex, bringing him to the medical bay where, with the assistance of the Force, she's able to remove his chip. As a squad of troopers close in on them. Ahsoka asks Rex how many of the clones have the chips: he responds to her horror that they all do. The entire Grand Army of the Republic has been set against the Jedi.

Firsts and Other Notables
The Siege of Mandalore concludes here, with Bo-Katan's faction successful (though hardly celebratory), as the series shifts fully into "wrap up the Clone Wars/tie-in to Revenge of the Sith" mode by depicting the effect of Order 66 on Ahsoka and her half of the 501st.

Clone Trooper Fives discovered the truth about the clones' inhibitor chips (which effectively brainwash them into seeing the Jedi as traitors to be executed on sight once Palpatine issues the "Order 66" code word) in a season six arc (after one of his squad mates' chips activated prematurely); his investigation was shutdown (and he himself killed by Senate guards on Coruscant), though he passed along some of his findings to Rex, who filed the report Ahsoka references here.

Ahsoka's droid R7-A7, who was essentially her Artoo earlier in the series, returns in this episode to help her free Rex of his inhibitor chip.

Captured last episode, Maul is freed in this one by Ahsoka (willingly & understandably); this contradicts the novel Ahsoka, in which it was said that Order 66 occurred while Ahsoka was still on Mandalore and Maul held captive in a ray shield, and that Maul was able to use the ensuing chaos post-Order 66 to escape (though the spirit of him escaping captivity following the downfall of his Mandalorian leadership is similar).

Similarly, in Rebels, Rex says that he had his chip removed, which prevented him from turning on Ahsoka when the order was given; here, it's revealed that he did turn on her (though his knowledge of Fives' investigation allowed him to resist the cimpulsion to kill her long enough to give her a clue about what was happening), and that it was Ahsoka herself who later removed the chip to restore him to his senses (which seems less like a a contradiction than Rex simplifying things in the telling in Rebels).

A Work in Progress
Obviously, this episode is intertwined even more fully with the events of Episode III, as Ahsoka walks in on the tail end of the Jedi Council meeting setting up the attempt to arrest Palpatine, then hears echoes in the Force of Mace Windu's death and Anakin's fall to the Dark Side, before the clones aboard Ahsoka's ship receive the message to execute Order 66 from Palpatine.

Given the chance, Ahsoka chooses not to share Maul's vision of Anakin as Darth Sidious' apprentice with the Jedi Council, a decision presumably born of both her distrust of the council (they did, after all, falsely accuse her of murder) and her faith in Anakin's goodness, all of which adds another layer of tragedy to Anakin's fall and the rise of the Empire (would things have gone down differently if Mace had been warned, ahead of confronting Palpatine, that there was a possible future with Anakin on the side of the Sith? Probably not - Mace was already suspicious of Anakin at this point just because of his personal loyalty to Palpatine - but then again, maybe it'd have been enough for him to keep a closer eye on Anakin during his duel with the Sidious).

Just before the order is executed, Rex & Ahsoka bond over their respective relationship to the war: Rex literally wouldn't exist without it, while Ahsoka, only ever knew what it was to be an official out-in-the-field Jedi in the context of the war, leaving both uneasy in the face of its seeming end.

Did You See?
When attempting to locate Rex's brain chip, Ahsoka repeats the "I am one with the Force, the Force is with me" mantra introduced by Chirrut Imwe in Rogue One; this is, I believe, the first time it's been directly associated with the Jedi (albeit a former one), rather than an offshot Force sect.

One of the droids helping Ahsoka, Cheep, is a C1 droid, the same model as Chopper from Rebels.

What's the Deal With the Mandalorian Vault?
The Hannibal Lecter-style prison Maul is transported in before being released by Ahsoka in the wake of Order 66 is a Mandalorian Vault, a special device used by the Mandalorians to hold Force-sensitive prisoners, developed & used primarily during their ancestral wars between the Mandalorians and the Jedi (the longstanding animosity between the two groups having also been referenced recently in The Mandalorian). The device was created for this episode and is making its first appearance here, but similar devices were occasionally referenced in earlier Legends stories. 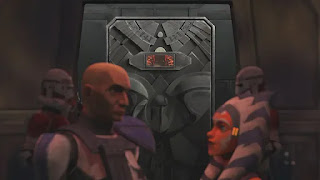 Austin's Analysis
There was a palpable sense of dread hanging over the previous episode, but that was nothing compared to this one. There's a scene in Revenge of the Sith, in which the sun is setting on Coruscant as Anakin, alone at the Jedi temple, wrestles with staying put and risking the death of Palpatine (and, therefore, in his mind, his wife's) or charging after the Jedi going to arrest him, while Padme, at her apartment, watches the temple, all while a barely-audible, mournful wail plays over the scene (on the score, that track is titled "Padme's Ruminations"). It's one of my favorite moments in all of the Star Wars movies, a moment in which time seems to slow down as the entire thrust of future events, including Anakin's tragic fall, waits, quivering, for a single decision: stay, or go? Every time I watch it, there's a part of me which hopes it will end differently (but of course, it never does).

This episode felt like that scene, stretched out for twenty odd minutes. Once it became clear the series' closing arc would fit in and around the events of Episode III, tackling Order 66 became inevitable. But after two episode which went big on action, spectacle, and epic storytelling, the series goes small to do so, using, essentially, a bottle episode to tackle this monumental & tragic shift in galactic power. It does so by building its devastating emotional impact entirely around the relationship between Rex & Ahsoka, compounded by the fact that Rex (earlier in the series) had gotten the closest of anyone who wasn't a Sith Lord to uncovering the truth about Order 66, thereby lending an added layer of potential tragedy to the proceedings (that Ahsoka may not only have to kill her friend to survive, but also kill her best avenue towards finding the full truth).

Where Revenge of the Sith necessarily goes big to show the full scale of the order's devastation, here, Order 66 becomes deeply personal, boiling down to a duet, as one person desperately tries to stay alive at the hands of one of her best friends, then turns around to try and save that friend's life & mental independence, all the while being hunted by forces with her image, once a sign of comradeship & solidarity, emblazoned on their visages. There was still action a plenty (a lightsaber-less Maul doing his best to be a distraction, the whiz bang swirl of lightsaber blades as Ahsoka defended herself against the initial clone attack), but the dominant takeaway from this episode is the core tragedy at the heart of Order 66: the way it turns battle-tested friends and comrades-in-arms haplessly against one another, all in the service of an implacable evil.