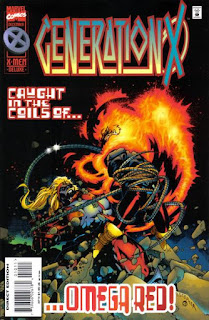 Plot
Paige & Skin arrive at Proudstar Hall for Mondo's welcome party, and are greeted boisterously by their newest classmate. Jubilee, however, is bummed about Penance's relapse into a coma, and Banshee is late to the party. Monet flies off to check on him, and discovers him near death. Emma arrives and enters his mind in order to try and keep him alive, while sending the kids out after his attackers. Elsewhere, Emplate returns to Gayle Edgerton's estate, as their plans will soon be coming to fruition. In Banshee's mind, Emma relives specific memories of Banshee as an Interpol agent, hunting a serial killer with the assistance of a pre-Magneto Erik Lensherr. At the school, Jubilee ponders if the only way to help Penance is to enlist the aid of someone who knew her before she came to the school - like Emplate - while the rest of her classmates, with the help of Synch's aura, track down Banshee's attacker: Omega Red, who grabs Chamber with a tendril and announces he will them just like he killed their headmaster!

Firsts and Other Notables
This issue marks Mondo's formal introduction to the team, following the events of Generation X '95, though he mostly disappears after the initial party scenes (he stays back with Jubilee while the rest of the team goes off in pursuit of Banshee's assailant). 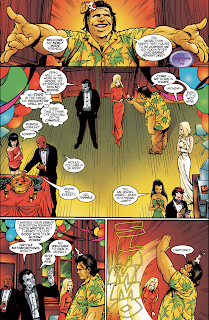 That assailant is Omega Red, whose past with Banshee was teased in issue #7, having attacked him off-panel before engaging with Generation X at the end of the issue. 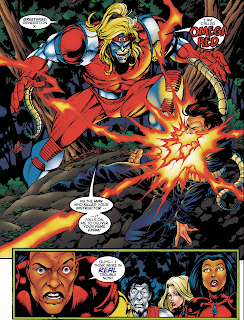 Monet notes that with Mondo's arrival & Penance's condition, no one is asking too many questions regarding her strange behavior of late, to her benefit (what secrets she's keeping will come to ahead - sort of - in the story after this one, beginning in issue #12).

In further setup of the book's next story, Emplate & Gayle Edgerton, last seen forming their alliance in X-Men Prime, are shown to be close to making their move against Generation X (that will also come in issue #12). 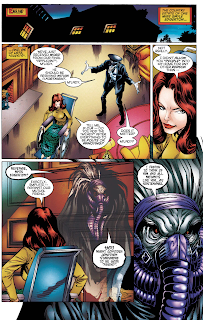 This issue reveals that Banshee encountered Magneto before either were costumed superheroes /villains, as he received intel from Magneto about the serial killer he was tracking (who will turn out to be Omega Red, which is technically a spoiler, but also, it's kind of obvious at this point).

The Chronology Corner
Paige references her trip home in Uncanny X-Men '95, setting this issue after that annual (and, of course, Generation X '95 takes place between last issue and this one.

A Work in Progress
Mondo's welcome party takes place in Proudstar Hall (named after Banshee's deceased X-Men teammate, Thunderbird, a nice bit of continuity given that Banshee was the member of the team trying the hardest to save Thunderbird when he died), a heretofore unseen part of campus (at least for Skin). Seems like it might have been a good place to house some of the students displaced by the destruction of the girl's dorm earlier in the series, but whatever.

Jubilee is sad about Penance going back into a coma, as seen in Generation X '95. 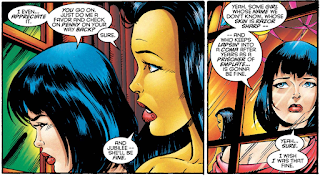 They're Students, Not Superheroes
Husk is surprised to learn that Skin has no desire to graduate into the X-Men, and plans to go home as soon as he learns to control his powers, a nice reminder that this iteration of the Xavier School isn't meant to be only a training ground for future superheroes. 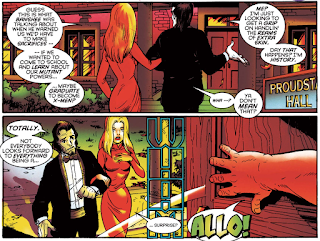 Austin's Analysis
Back from the quasi-trippy fantasy adventure that suffered the lack of Chris Bachalo, Lobdell catches up to the '95 annual and finally introduces Mondo to the full team. Though curiously, he then quickly pivots into a story about Banshee's past, essentially benching Mondo, leaving him behind with Jubilee instead of putting him in the group going after Banshee's attacker. In doing so, he sidesteps the chance to showcase the character for any readers who missed the annual (honestly, the setup of this issue makes it seem like it should be Mondo, not Chamber, taking charge and getting caught in Omega Red's coils at the end), which is a curious decision to make for a new-to-the-cast character (it almost seems sometimes like Lobdell doesn't even want Mondo around).

The art, with Tom Grummett filling in again, is quite nice though. Whereas last issue it suffered a bit from covering a story clearly designed to play to Bachalo's strengths, Grummett's work here really compliments the more low-key hangout/character-driven action of the issue. All of the characters look visually & ethnically distinct (Page & Emma, two Caucasian blond women, are, for example, nevertheless easy to tell apart on the page, something Roger Cruz struggled with in his fill-in work), and while it certainly lacks the verve & quirkiness of Bachalo's stuff, it's clean, concise, & easy to follow from a storytelling perspective, which, in late 1995, is something of an accomplishment.

Next Issue
Tomorrow, Colossus comes to town in Excalibur #92. Friday, Cable comes back from the future in Cable #26. Next week, X-Force & Cable '95!