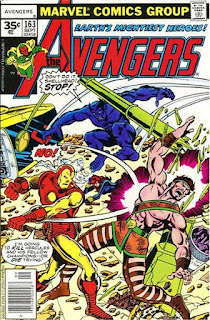 Typhon coerces the Avengers into attacking Hercules and the Champions.

Plot
Black Widow, Hercules & Iceman arrive in New York, responding to a distress call sent by the Avengers, but on their way to Avengers Mansion, they're suddenly attacked by Iron Man, who focuses all his energy on taking out Hercules. However, Hercules recovers faster than Iron Man expected, and he laments that Thor wasn't on duty when Hercules' old foe Typhon suddenly appeared in Avengers Mansion earlier that day. He thinks back to Typhon's appearance; sent by Pluto to kill Hercules and believing him to still be an Avenger, Typhon captured Beast and used him as leverage to force Iron Man to lure the Champions to New York, then attack them, softening them up for Typhon. Refocusing on the task at hand, Iron Man, who had hoped to slip Black Widow a communicator in order to fill her in on the situation while attacking Hercules, is forced to lead Hercules to the mansion, where he's finally able to incapacitate him using the high voltage wiring in the mansion walls, knocking both of them out. Just then Typhon emerges, but he is attacked by Black Widow & Iceman, who are joined by the escaped Beast. The three hold off Typhon long enough for Hercules & Iron Man to recover. When faced with the combined might of all five heroes, Typhon suddenly disappears, having been recalled back to Tartarus by Pluto, who deemed him unlikely to best the combined might of the Avengers & Champions. Learning of the situation, Hercules absolves Iron Man of any blame, but Beast broods over his recent ineffectiveness as an Avenger.