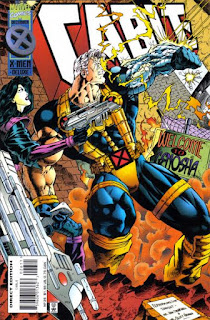 Plot
In Genosha, Phillip Moreau & Jenny Ransome meet with Essex, a mysterious contact who is helping feed their rebel operation supplies and info. He tells them they're close to discovering the truth about Genosha, but warns he can no longer interfere, as he's too close to being discovered himself. However, he promises more help will soon be on the way. Shortly thereafter, Cable & Domino materialize in Genosha on their way back from the future, and are found by Phillip & Jenny. Elsewhere, Cable's arrival is detected by Sugar Man, who believes it is Nate Grey, and thinks that the time has come to reveal himself. In Hammer Bay, the Press Gang laments their fall from grace, but receives a message indicating they may soon have a chance to get back into the good life. Meanwhile, Phillip & Jenny bring Cable & Domino their base, dubbed Safehaven. Cable is impressed by their operation, but Domino is reluctant to stay and fight, especially since Phillip won't let them contact X-Force for fear their communications are being monitored. Cable prevails on Domino, however, and they agree to stay and help the rebels. Just then, however, the Press Gang teleports into the base.

Firsts and Other Notables
Cable & Domino return from the future, and get dropped into Genosha. As such, this issue features appearances from most of the usual "when you do a Genosha story, these characters show up" suspects, including Phillip Moreau & Jenny Ransom, and the Press Gang (members of whom Cable recently fought in issue #22. 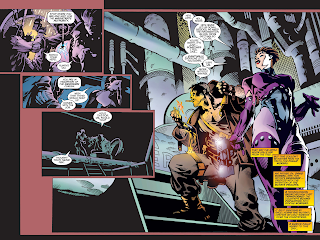 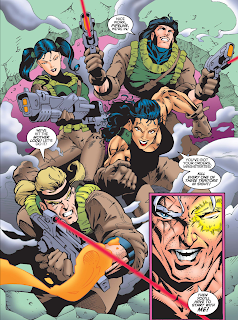 Mr. Sinister makes a brief appearance in this issue, as he is revealed to be smuggling info & equipment to the Genoshan rebels, using the name Essex. He says that the rebels are close to discovering the truth about Genosha (ie that Sugar Man is behind the mutate bonding process).

And of course, there's also a now-obligatory check-in with Sugar Man, who detects Cable's arrival and erroneously believes him to be Nate Grey, come to Genosha in response to Sugar Man having sent Rex out to kill him. 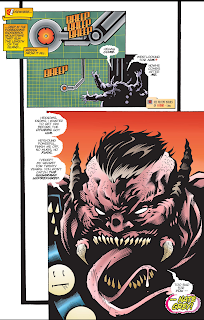 A Work in Progress
Domino is worried about finding a time to tell Cable about Grizzly & Tyler (the latter having forced the former into a situation in which Domino had to kill him, in issue #24).

Domino worries that Jenny Ransome is reminiscent of Aliya/Jenskot 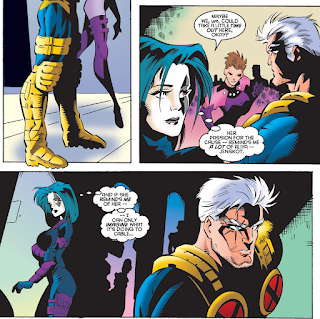 Austin's Analysis
Cable & Domino return from the future and get dropped into a Standard Genosha story, where a group of human & mutant rebels are fighting against elements of the previous anti-mutant regime against a backdrop of dystopian militancy. Loeb pays lip service to recent events in the series (Domino killing Grizzly, Cable's time travel-aided reunion with this deceased wife, and, of course, Rene Majcomb was shown arriving in America from Genosha to get Xavier's help back in issue #22, though that gets only the most oblique of references here), but it does little to paper over the randomness of this all. There's probably some interesting things to be done with the fact that, of all the various X-characters, Cable is the one with the most experience with armed insurgencies & rebellions (a point he briefly makes in this issue) even if he has no specific narrative or thematic connection to Genosha, and, of course, Sugar Man is looming in all this (which has the potential to add a wrinkle to this particular Genosha story, maybe?), but for the most part, at least in this introductory setup chapter, this reads like little more than Cable fulfilling the X-books' apparent "each spinoff must eventually do a Genosha story" obligation.

Next Issue
Next week, the Impossible Man drops by for X-Force & Cable '95!