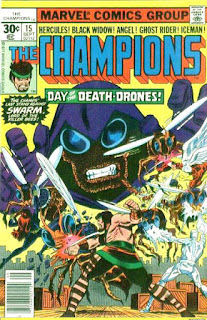 In a Nutshell
The Champions battle Swarm!

Plot
As the Champions attempt to block the massive swarm of bees from infiltrating their headquarters, another group of bees constructs a hive atop the building. Despite the Champions' best efforts, Swarm enters the building, and his robot drones capture Iceman & Darkstar, bringing them inside the hive. As Hercules tries to break into the hive, the swarm begins attacking innocent bystanders outside, prompting Angel & Ghost Rider to leave & assist the authorities as best they can in protecting people. Inside the hive, Swarm tells Iceman & Darkstar his origin, revealing the briefcase they brought into their headquarters to contain the queen bee of the swarm that comprises his body, encased in amber. Darkstar can feel a connection to the bee, so she frees it, and it breaks into the hive, growing in size. However, Hercules manages to overpower the queen & hurl the massive insect out of the city and into the ocean, which prompts the rest of the swarm - including the bees comprising Swarm's body - to follow her. Swarm, now little more than bones & a hooded cloak, tumbles to the ground, though the Champions fail to see the single bee emerging from his skull.