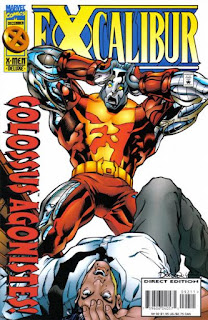 Plot
Returning from their trip to the pub, Kitty bids Wisdom goodnight as he remains outside for one more cigarette. Out of the darkness, Colossus attacks, enraged at having seen Wisdom with "his Katya". Colossus savagely beats Wisdom, who manages to use his power to slice into Colossus' back. As the rest of the team responds, Brian & Meggan knock out Colossus, and the injured parties are taken to the medlab. Moira is able to repair Colossus' spinal injury with relative ease, but Wisdom remains in critical condition. Colossus is moved to a holding cell and, when he wakes up, receives a dressing down from Nightcrawler. However, Nightcrawler is sympathetic given all that Colossus has gone through, and gives him the cover story of needing to remain with Excalibur for observation of possible neural problems as a way for Colossus to stay with the team and make amends. Later, Kitty visits Colossus as well, telling him Wisdom will live, barely. Colossus insists he cares about Kitty, but she says if that were true, he never would have left her for someone else, or hurt someone she cared about. He asks if Wisdom is good to her, and she says yes, adding to herself as she phases away, "just like you were".

Firsts and Other Notables
Colossus joins Excalibur in this issue; his intention in coming to Muir Island was simply to look up Kitty (whom he's suddenly decided is the great love of his life who must absolutely feel the same way about her, even though he previously opted specifically not to stay on Muir Island and instead go back to Avalon with the Acolytes in issue #71), but he ends up joining the team after attacking (and nearly killing) Pete Wisdom out of jealousy, with Nightcrawler suggesting he needs to stay with the team for observation as a way to prevent him from getting into any larger trouble for the attack. 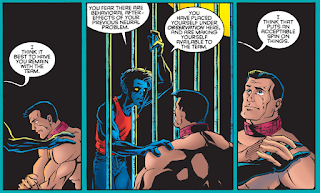 With his arrival, the book once again regains its standard quotient of former X-Men on its roster (three), a number that had been lacking since the departure of Rachel Summers in issue #75. He will stick around through the end of the series, at which point its three former X-Men will move back to their original team.

Colossus' attack on Wisdom is particularly brutal, as he doesn't pull any punches against a (physically) human opponent, breaking several ribs, fracturing his skull, and collapsing a lung in the process, something we don't usually see (as his opponents tend to be invulnerable/are better able to defend themselves against his strength).

Casey Jones pencils this issue, his first on the book (he also contributed to X-Man #10 the month before, his first work for the X-office). Jones will serve as the series' sort of co-regular artist, trading off with Carlos Pacheco, for the duration of Warren Ellis' run, with the pair alternating stories and issues (ie Jones draws this issue and the next two, then Pacheco comes aboard and pencils two issues, then Jones does another, etc.). Jones doesn't have a ton of credits to his name, but he pencils stuff for Marvel well into the 00s (and currently works for Disney, I believe), though I mostly just know him as "the artist who isn't Carlos Pacheco during Ellis' Excalibur run".

A Work in Progress
In a legitimately funny moment, Wisdom upon seeing Colossus bearing down on him and not having the first clue who he is, asks if he's the Terminator. 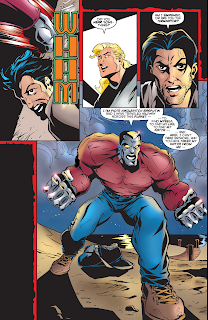 Captain Britain & Meggan are described as the strongest members of Excalibur; that's not uncommon to think in the context of Brian, but Meggan usually isn't considered as such (though its technically true). 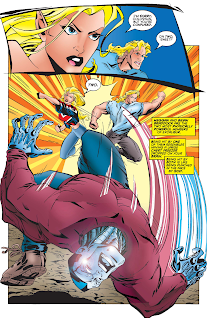 Following issue #71, Moira has adjusted some of her medical equipment to accommodate Colossus' organic metal physiology. 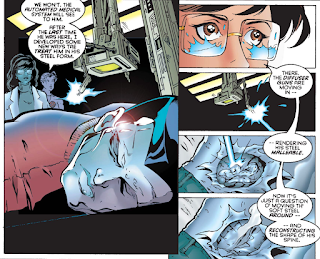 Colossus suggests he only joined the Acolytes in an effort to mitigate their more evil, violent impulses, which is casting himself in a pretty favorable light given how his actual defection was depicted (as an act of someone deeply hurt & angry after a series of admittedly crappy things happened to him one after the other). 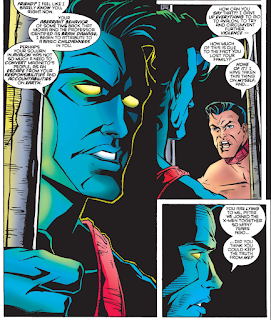 Kitty says they've "heard reports" of what Colossus has gone through, and I'm not quite sure what that means...maybe the stuff about crashing to Earth from Avalon? Cuz Excalibur was present for Colossus' last big life decision in #71.

Austin's Analysis
With this issue, Ellis adds Colossus to the roster of the book (a decision I've always been curious about, as to whether it came from Ellis himself or was something editorial asked him to take on), and in the process, he briefly tries to litigate and re-contextualize Colossus' actions in the recent past; essentially, his "defection" and association with the Acolytes (now that the group has essentially disbanded). The idea that Colossus only joined the Acolytes to help steer them away from violence - something Nightcrawler more or less rightly calls shenanigans on - is a pretty blatant retcon. Colossus certainly ended up in that role, sort of, at least in stories like Uncanny X-Men #315, but his initial defection definitively grew out of his grief for Illyana and rage towards Xavier's inability to save her, and he stayed with the Acolytes, circa X-Men #25, specifically to care for the now brain-dead Magneto as a sort of proxy for the sister who died. And the winky bit with Nightcrawler asserting that Colossus' involvement with the team is due to his need for treatment is overly cute (and largely unnecessary; rightly or wrongly, the X-Men have forgiven worse).

But while Ellis maybe isn't the best person for the job - his familiarity with the previous material seems a bit spotty in places, a frequent problem for Ellis in stories tied to specific bits of continuity - reckoning with Colossus' time as a "villain" is necessary in order for the character to move past that (still of questionable merit) development and be part of a regular series' cast again, and Ellis, particularly in the scenes with Nightcrawler, a character with a long history with Colossus (even longer than Kitty) who's never really had a chance to express his own feelings about Colossus' actions, does it well enough to accomplish what it needs to. While perhaps not a full accounting of his time with the Acolytes nor his immediate actions at the start of the issue, this works well enough to clear the deck in order to bring Colossus onto the book, and if nothing else, the effort is appreciated.