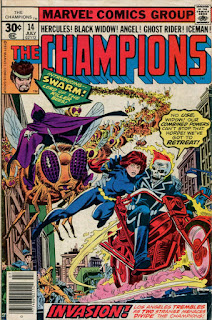 In a Nutshell
Swarm debuts as the Champions' headquarters turns against them!

Plot
A brooding Hercules is suddenly attacked by the automated defenses of the Champions' headquarters, and Iceman soon gets drawn into the attack as well. Meanwhile, Black Widow, Darkstar & Ghost Rider are at the port, saying goodbye to Ivan, who is returning to Russia. Elsewhere at the port, a nervous man rushes through stacks of packing crates, determined to get the briefcase he is carrying to the authorities, though he is unknowingly watched by a strange being. After Ivan boards the ship, he's confronted in his cabin by armed men, while outside, the departing Champions are suddenly attacked by a series of robotic bees which trigger explosions on the dock. During the attack, the strange figure tries to take the briefcase but can't grab it, as if there is some kind of repellent on it. He departs along with the mechanical bees, and the Champions find the nervous man dead, as if stung to death. Checking his wallet, they discover he is an Interpol agent. Back at their headquarters, Iceman & Hercules manage to shutdown the building's power, stopping the attacks against them. Iceman realizes the defense equipment has similar faulty wiring to their Champcrafts, but just as he shares this news with with the rest of the newly-returned team, Angel crashes through a window, desperate to escape the massive swarm of bees heading towards the Champions!