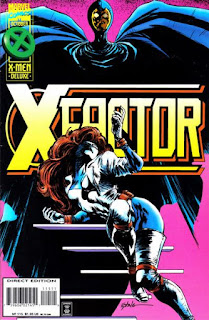 "Reaching Out to Yesterday"
October 1995

In a Nutshell
Mystique & Forge and Cyclops & Havok have heart-to-heart talks.

Plot
Still struggling to control his powers, Havok has returned to Alaska, and is thinking back on the plane crash that separated him and his brother from their parents when Cyclops finds him, telling him they're going to get through this together. Meanwhile, in X-Factor's new base, Mystique tries to hack into Forge's files but is stopped by her inhibitor. Observed by Wild Child, the pair agree to keep each other's secrets for now. Elsewhere, Forge is visited by a vision of his deceased mentor Naze, who tells him he must return to the ways of the shaman, but his meditation is interrupted by Mystique. She tries to get Forge to open up, and he does, activating his holographic files to show her a collage of important moments in his life. One that catches her attention is Destiny telling Forge he's destined to be with Mystique. He is still pondering what she meant, while Mystique insists Destiny just wanted them to be happy together, something Forge won't accept. In Alaska, Cyclops & Havok go to a bar, and eventually get into a bar fight with some ignorant locals to blow off steam. After the fight, Cyclops insists that, no matter what, they'll always be there for each other. Elsewhere, Dark Beast reforms Random, telling him to infiltrate X-Factor, and bring him the head of Havok.

Firsts and Other Notables
Howard Mackie's run on the series begins this issue. After doing some off-and-on work for the X-office in the previous few years (including the Gambit & Rogue miniseries), this is his first regular X-book assignment, and he'll stay on the series through to its conclusion with issue #149, when it becomes Mutant X (which he will then continue to write to its completion).

The handoff between him and John Francis Moore is fairly smooth, as Mackie continues most of the plotlines Moore had kicked off in his short run, including Havok's out-of-control powers, the presence of Wild Child on the team, the machinations of Dark Beast, and the mystery of whatever Forge is worrying about (which will turn out to be the return of the Adversary), suggesting at least some of those plotlines may have been editorially-mandated (or that Mackie is being a good sport and not just wiping the deck of Moore's unresolved plots).

Naze, Forge's mystical mentor who was trying to prepare him to battle the Adversary before being killed by Dire Wraiths in Uncanny X-Men #187 (at which point the Adversary adopted his form to appear in a bunch of issues between then and "Fall of the Mutants") returns in this issue (it's not clear if he's a vision or memory of Forge's at this point, but subsequent issues will make it clear he's back). He will play a role in the upcoming Adversary story, though no explanation will ever be given for how he returned from the dead. 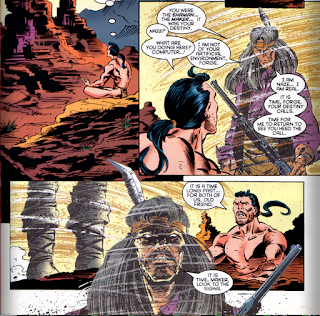 Random, last seen in issue #112 collapsing into a pile of goo after receiving a mysterious phone call and killing his girlfriend Vera, returns on this issue's final page, restored to his regular form by Dark Beast (who is implied to be responsible in some way for Random's creation), who tasks him with killing Havok. 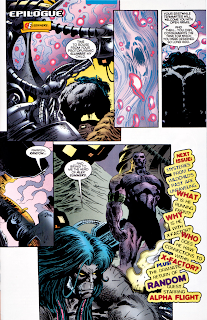 X-Factor's new "Falls Edge" headquarters debuts in this issue; this will remain their main base of operations for the duration of the series' existence. 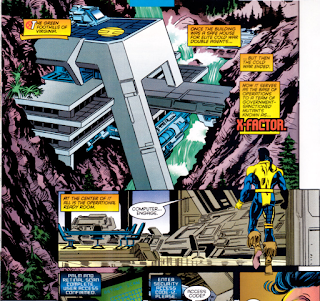 A Work in Progress
This issue opens with a flashback to the plane crash that disrupted the Summers’ family life, from the perspective of Havok (which mostly tracks with previous renditions of it, but does specifically call out the involvement of the Shi’ar, something previously established but not shown in these kinds of flashbacks). 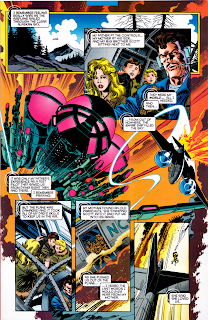 Forge shows Mystique (and readers) a holographic montage of his past, as well as a recreation of Destiny, recalling her prophesy of Forge & Mystique’s future together. 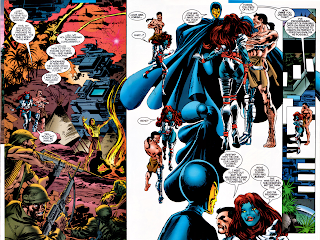 Austin's Analysis
This is a relatively quiet issue, focusing on plot setup (the Forge & Mystique stuff) and character development (the Cyclops & Havok stuff). Which is all well and good, but it feels very by-the-numbers, which is probably down to Howard Mackie's rather dull scripting. None of the dialogue here stands out as being objectionably bad - no one sounds particularly out-of-character or is saying things at odds with the art - but none of it stands out much at all, either. For the most part, everyone sounds the same; Havok's dialogue, for example, clearly belongs to him because of what's he saying, but there's nothing in the way he's saying it that makes it that much different from Cyclops' dialogue. It's not the worst sin a writer can commit (and it's not like Havok is the most verbally-unique character in the first place), but the end result is an issue that feels a little humdrum, even as its setting up the book's next big story arc and showcasing a rare opportunity for Havok & Cyclops to just hang out as brothers.