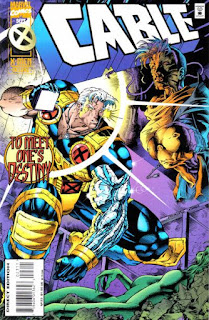 In a Nutshell
Cable searches for Tyler as Domino tracks down Grizzly.

Plot
Cable is meditating on the lawn of the X-Mansion when he is interrupted by Storm. He shows her a postcard he received recently, addressed to "Nathan Dayspring", a name not many know him by. She suggests he speak to Professor X about it. Meanwhile, Domino tracks Grizzly in the Rockies. At the X-Mansion, Cable & Xavier discuss Tyler. Cable decides to seek help to find his villainous son. In the Rockies, Domino comes across a cabin belonging to Grizzly. Meanwhile, Cable meets with Blaquesmith, who points him to Tyler's previous sanctuary, where Blaquesmith has recently detected computer activity. After Cable leaves, Blaquesmith contacts Mother Askani, who tells him the Askani'son's trials are only beginning. In the Rockies, Domino discovers multiple bodies in the attic of Grizzly's cabin, along with a near-feral Grizzly. He blames someone for turning him into a monster, and says that only one of them will get out of the situation alive. Elsewhere, Cable searches Tyler's abandoned sanctuary and discovers the unconscious form of Jenskot, his deceased wife.

Firsts and Other Notables
This issue begins to flesh out the futuristic Askani religion/philosophy to which Cable is a somewhat agnostic adherent, establishing here that meditation techniques are part of its teachings and revealing that there is a specific Askani language (this issue also teases the upcoming Askani'son miniseries, which will dive into all this much more). As part of that, Cable's status as some form of "Chosen One", an idea danced around previously, begins to get more traction here (ultimately, the idea becomes that he is chosen to defeat Apocalypse once and for all). 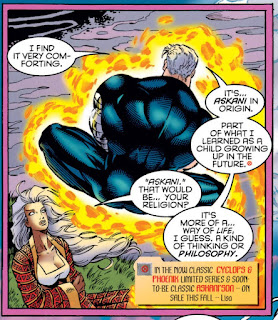 Cable refers to Tyler as "Jenskot's son" a few times in this issue, implying that Tyler is not his birth son, though such a change in their relationship is never confirmed and, despite his odd wording here (and in subsequent issues), Tyler remains canonically Cable's son by blood. 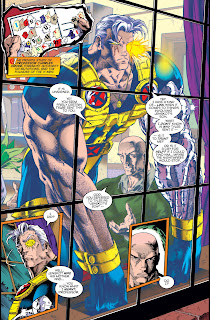 The issue concludes with the previously-dead Jenskot turning up in Tyler's safehouse (the base he was operating out in issues #6-8, before he adopted the Genesis moniker and took control of the Dark Riders). 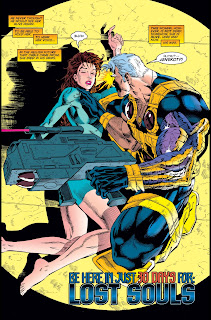 Blaquesmith is still trying to figure out who broke into his base in issue #21, and it's almost laughable how neither he nor Cable can tell it's X-Cutioner based on the "scrambled" image. I mean, Cable has even fought X-Cutioner in the not-to-distant past. 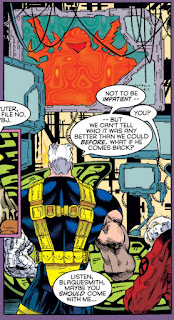 A Work in Progress
Cable can be seen wearing a Phoenix emblem necklace, the symbol of the Askani, in this issue.

The same psychic disturbance that was affecting Xavier in X-Men #44 (ie X-Man) is felt by Cable.

Speaking of, Blaquesmith is dodgy about it with Cable, but he's clearly tracking Nate's movements. 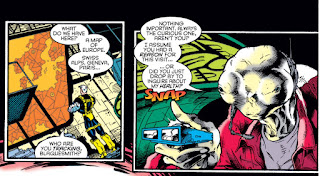 Cable asks if Rene Majcomb has contacted Xavier since the events of last issue; she has not, something which concerns both men. 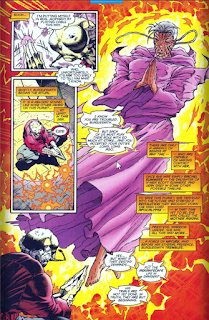 Domino's suspicions from last issue are confirmed as she encounters a near-savage Grizzly, who says he's killed all the people he's accused of killing. 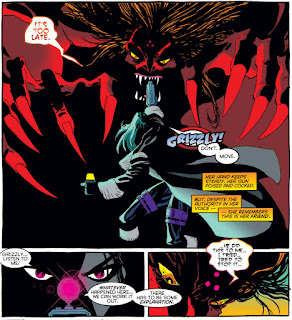 The Cable Guy
Cable tells Storm he's about more than guns & ammon; proving as much could be construed as Jeph Loeb's goal as writer of the series, developing the character past his cliche 90s trappings. Or at least offering up something in addition to them (since Cable of course still carries a big gun in this issue). 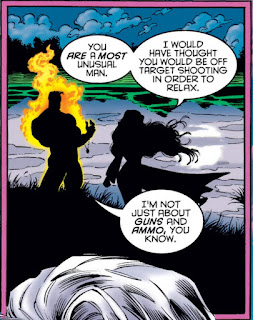 Artistic Achievements
Art duties in this issue are split between Ian Churchill and Tim Sale, with Sale drawing the Domino material while Churchill handles the Cable stuff. The back-and-forth between their styles can be...jarring, but it's always nice to have more Tim Sale art. 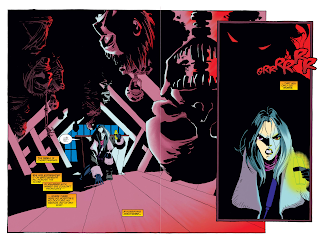 Austin's Analysis
This issue kicks off a story that will run through #25 and explore Cable's past (from when he was in the future). Cable's past is actually surprisingly fertile ground for a character coming up on the start of the third year of his solo series (and five-ish years being featured in a team book), ground that hasn't really been trod much beyond some brief flashbacks (and the Adventures of Cyclops & Phoenix limited series, which was really more about his parents anyway). Of course, a lot of that backstory involves pseudo-religious bird-themed nonsense grafted onto a standard Chosen One archetype, so your mileage may vary on how engaging this stuff is (I ate it up as a teen; we'll see how well I respond to it this time around). But fleshing out the central character's background is an important part of a solo series, and it's good to see Loeb doing that while also building up the series' supporting cast (Domino, of course, and Blaquesmith, who also ties in with the Askani stuff, but Loeb clearly enjoys the pairing of Storm & Cable as well, and it's good to see him return to that here). How effective these efforts will be remains to be seen (Loeb has his work cut out for him making us care about Jenskot, for example), but in the abstract at least, they're appreciated.