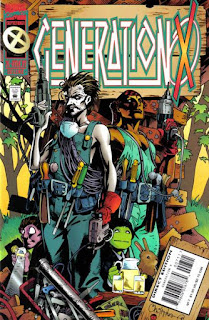 In a Nutshell
The school deals with the loss of the girls' dorm, while Banshee receives a mysterious call from Ireland.

Plot
Banshee, having dreams about an old case from his Interpol days, accidentally draws Emma into his dreams, now that the two are sharing Banshee's cottage in the wake of the girls' dormitory being destroyed. The next morning, Chamber laments having lost control and destroying the dorm. Paige thanks him for not telling anyone that she tried to kiss him, and though he thinks this is because she would be embarrassed if anyone knew she was attracted to a monster like him, she does have feelings for him, something which isn't lost on a watching Jubilee. Meanwhile, Synch & Skin build Artie & Leech a treehouse inside the school's biosphere. In Ireland, a woman named O'Brien rushes into a pub, desperate to get ahold of Banshee. Back at the school, Monet confronts Gateway, asking why they need to stay at the school before ultimately agreeing to the necessity. As Banshee watches them, Emma approaches and confesses to having kicked Leech when being held captive by Gene Nation, something she feels terrible about, offering to leave the school. Banshee says he's not about to send her away just as she's becoming a better person, but they are interrupted by Jubilee, alerting Banshee to the call from Mrs. O'Brien. Banshee takes the call and is stunned to learn that Cassidy Keep, his family castle, has disappeared.

Firsts and Other Notables
With Chris Bachalo off working on a Death miniseries for DC, go-to mid-90s X-office fill-in artist Roger Cruz draws this issue.

In "furthering Monet mysteries" news, Jubilee accidentally rips a book Monet had been reading in this issue. It turns out to be a coloring book, which Paige assumes to be a childhood memento. But this is actually a clue towards her true condition (as the young St. Croix twins). 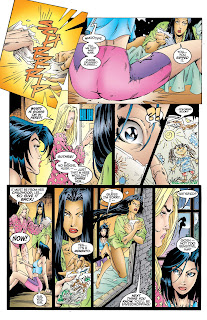 Also, Monet drops in on Gateway, revealing a history between the two and thereby connecting Monet to Penance (whom Gateway delivering to the school). 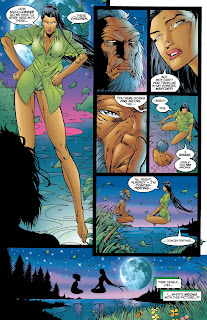 Banshee's dream involving his Interpol days and the disappearance of Cassidy Keep will actually lead to two separate stories; the latter is addressed over the next two issues. The former in issue #11 (when it's revealed the Russian killer Banshee was chasing back in the day, who appears in the dream in this issue, is Omega Red).

A Work in Progress
In the wake of the girls dorm explosion last week, Emma has given up her home to the girls and has temporarily moved into Banshee’s private cottage. 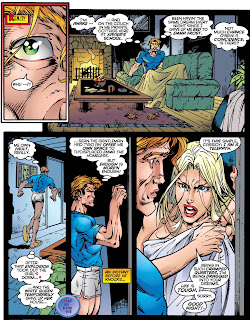 It's also noted that Paige husked her form in order to prevent being harmed by Chamber’s blast.

Synch & Skin spend the issue (adorably) building a treehouse for Artie & Leech in the Danger Grotto. 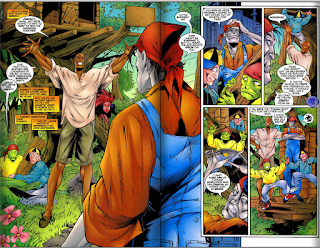 Young Love
Chamber & Paige continue to dance around their feelings for one another, something Jubilee has noticed. 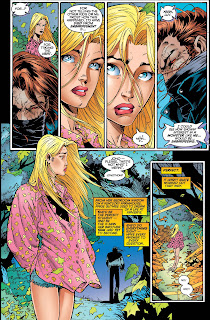 Austin's Analysis
Chris Bachalo may be gone - for now - and there's no denying his absence is felt (Cruz is a perfectly serviceable fill-in artist, though the teenage girl are suddenly WAY more chesty & leggy than ever before, and it's hard not to wonder how much more all of this would pop if Bachalo were drawing it), but to his credit, Scott Lobdell more or less continues on without missing a beat. Meaning, this is another plot-lite, character-heavy issue that plays to his strengths, continuing to develop the young cast and tease various mysteries (like whatever Monet's deal is). If anything, the moments Lobdell focuses on the plot - ie introducing the mystery of whatever is happening at Cassidy Keep, Banshee's Interpol flashbacks/dreams - are the weakest parts of the issue. It's impossible not to feel like this is a letdown after the previous six issues (plus Generation Next), but once the absence of Bachalo is accepted, it is, thankfully, of a piece with what's come before.