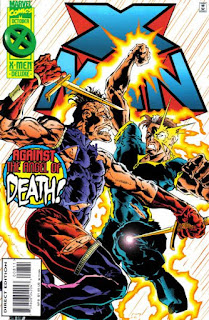 In a Nutshell
Nate battles Rex on a yacht.

Plot
Still mourning the absent Madelyne, Nate has taken a job as a deckhand on a small yacht. His powers fluctuating, he acts churlish towards the rest of the staff and passengers. In Maryland, Blaquesmith detects his energy output and recognizes it as being similar to Cable's. Meanwhile, Rex arrives on the yacht and begins slaughtering the crew. Sensing something amiss, Nate goes up on deck and finds Rex, who he blasts with a massive burst of telekinetic energy. Detecting this surge, Blaquesmith decides such power can't go unchecked, and heads out to find Nate. Back on the boat, Nate & Rex fight, but Nate's fluctuating powers leave him vulnerable. Rex gains the upper hand and is about to kill Nate when he suddenly collapses. Standing behind him is Dark Beast, who offers Nate some long overdue answers.

Firsts and Other Notables
Jeph Loeb's exodus from the series begins here (next issue is his last) as he provides only the plot and leaves the scripting to John Rozum. Steve Skroce, who shares penciling duties with Scott McDaniel, will stick around a little longer.

The issue ends with Nate coming face-to-face with fellow Age of Apocalypse refugee Dark Beast, who is giving Mr. Sinister a run for his money in the "popping up all over the place in service of mysterious machinations" department of late. 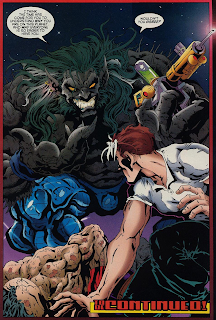 Blaquesmith spells it out for everyone at home: Nate has all of Cable’s power, but without the limitation of having to allocate a large portion of it to control a techno-organic virus. 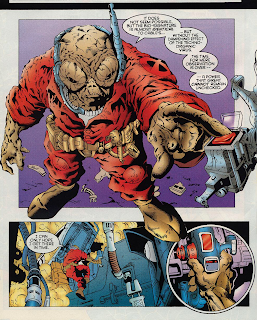 A Work in Progress
Nate is now beset by random uncontrollable outbursts that are preceded by him acting like a jerk, something we’ve never really seen before (and which seems to be an attempt to explain something, based on the way the dialogue is re-lettered).

When Rex is asked if he’s part of the crew, he answers “maybe this will jog your memory!” before killing the crew member, and...that’s not how action movie villain puns work. 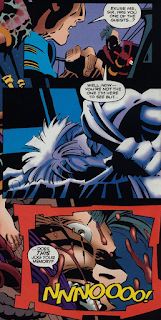 Austin's Analysis
Oof, well, this is a mess. Neither Steve Skroce nor Scott McDaniel are bad artists (I quite enjoy their work on the whole), but the seemingly random assignment of pages between the two results in visual whiplash and wild inconsistencies (the boat all of the action takes place on seems to change dimensions depending on who is drawing it, while characters like the sexpot passenger and her grandma disappear entirely), while Nate is depicted as being randomly surly/drunk at various times, leaving random bits of (re-lettered) dialogue to (try and) smooth over the various presentations of the character. Rex remains a dull villain (who only poses a threat to Nate thanks to the plot-convenient waning of his powers), and while the prospect of bringing together fellow Age of Apocalypse refugees is intriguing, such an encounter is only teased on the final page of this issue. The post-AoA version of this series has hardly had much in the way of a creative zeniths, but this is clearly its new nadir - for now, at least.