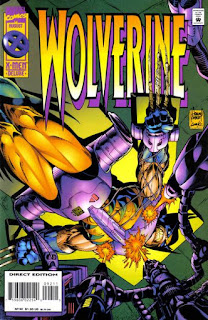 In a Nutshell
Wolverine's recent changes are tested by the Hudsons.

Plot
With James and Heather Hudson on hand, Wolverine & Sabretooth are run through a battery of tests. Wolverine is sure that Sabretooth is faking being harmless, but no one believes him. Once the tests are done, Wolverine is taken to the Danger Room for further analysis. There, he is faced with a simulation of the first time he met the Hudsons. Overwhelmed by the memories of his near-attack on them, he flees the mansion, desperate for fresh air and solitude. Outside, he observes a motorcycle and a car on a collision course. Instinctively, he intervenes, getting run over by the car, which is driven by the abusive neighbor Wolverine almost killed recently. Almost instantly, his body heals itself, to the bewilderment of his watching friends, and he acts to save the driver, despite his earlier animosity towards him, making his friends believe Wolverine will be okay after all. As he heads back to the mansion, he feels for a moment like he's being watched, before shrugging it off. However, the cloaked Zoe Culloden and her associate were indeed watching him, having been sent to observe his actions.

Firsts and Other Notables
James & Heather Hudson (Guardian & Vindicator, respecively, of Alpha Flight) guest star in this issue, as they help Xavier & Beast run tests on Wolverine & Sabretooth to determine the extent of Wolverine's physical & mental transformation following his fight with Sabretooth in issue #90.

Back in Wolverine #65, Wolverine went to a bar to hustle some pool and pick a fight, part of his mourning process for the recently-deceased Silver Fox. The biker he fights in that issue returns in this one, and Wolverine intervenes to save him from a likely-lethal crash with the abusive husband/father from last issue (I totally forgot about this callback and failed to call out the biker as being anything other than a random background character in my review). 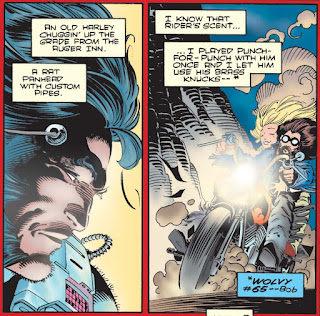 The abusive husband/father who lives next door to the X-Mansion (whom Wolverine nearly killed last issue) returns in this one, driving drunk and running over Wolverine when he tries to stop him from hitting the oncoming biker.

Zoe Culloden (last seen in issue #83) & Noah DuBois (the strange man who served as Senator Kelly's aid in Uncanny X-Men #298 and secretly watched Cyclops & Phoenix in X-Men #42), of Landau, Luckman & Lake, pop up on the last page of the issue, setting up their appearance in the next issue. 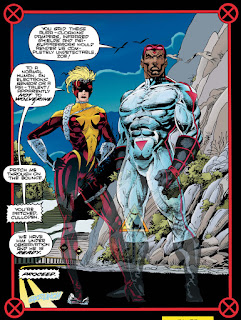 Wolverine isn’t buying Sabretooth’s docile act, and Sabretooth gives him a look to suggest he’s right to be suspicious, which doesn't quite gel with how the "docile Sabretooth" storyline will play out over in X-Force. There, it's much more clear that, at this point in time, Sabretooth is genuinely docile; only later, once his brain finishes healing - more or less around the same time as he regains the ability to speak - does he switch from "actually harmless" to "faking being harmless". As of this issue, he probably should still be genuinely docile. 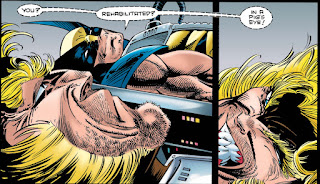 A Work in Progress
Thanks to a holographic recreation, the extent of the damage of Wolverine’s claw to Sabretooth’s head is shown. 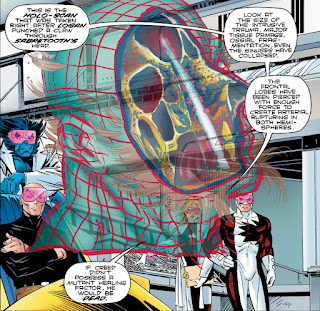 Picking up the plotline from Jeph Loeb, Hama has Boomer escort Sabretooth out of  his tests, much to Wolverine’s dismay. 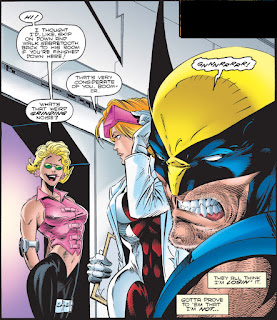 When Xavier & the Hudson’s run additional tests on Wolverine, the equipment sparks memories of Weapon X. 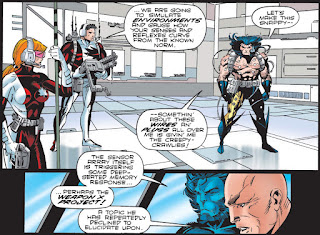 The Best There is at What He Does
Wolverine is able to piece himself back together after being hit by a car within seconds; Xavier, Beast and the Hudson’s theorize it represents the full strength of his healing factor when not compensating for the adamantium. 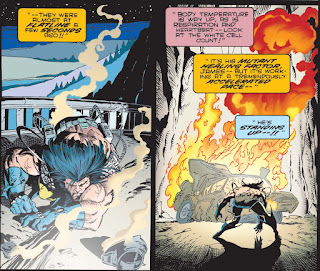 Austin's Analysis
Just the second issue removed from the return from "Age of Apocalypse", this issue is still all about examining Wolverine's post-Sabretooth assault status quo, and it does so by literally having Wolverine examined throughout the issue by the Hudsons, Beast, and Xavier. It could be drab stuff, but thankfully, Adam Kubert returns to punch things up a bit, doing everything he can to make holographic x-rays and discussions about Wolverine's mental state as visually exciting as possible. Hama, similarly, sprinkles in some nods to past stories, both near (the abusive husband from last issue) and far (the biker from issue #65), along with the requisite flashbacks to Wolverine meeting the Hudsons and references to the Weapon X project, to help spice things up. Plot-wise, it's not the most exciting or propulsive issue, but thanks to the level of craft involved, it gets the job done.