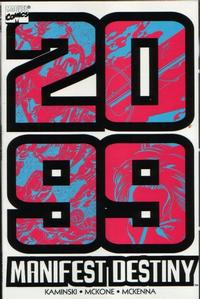 In a Nutshell
The heroes of 2099 band together with a returned Captain America to conqueror the stars!

Plot
Xina and Spider-Man's brother Gabe follow a "treasure map" underwater and discover a figure trapped in ice: Captain America. Meanwhile, Spider-Man, now the head of Alchemax, argues with Xi'an, governor of Xavier City, about the Meta Genome Project. He is interrupted by the arrival of Gabe & Xina with Captain America. Once Cap awakens, Spider-Man asks him for information about the end of the "Age of Heroes", in the hope of preventing a similar outcome in his time. Later, Spider-Man reveals that he's found Don Blake's old walking stick, and hopes Cap will use it to adopt the powers of Thor and serve as an inspiration to people. Cap reluctantly agrees. Time passes, and the Watcher, along with the Fantastic Four, creations of the Watcher, approach Spider-Man & Cap and ask them to gather Earth's heroes in the hopes of assaulting an invisible barrier placed around Earth by a group of aliens, preventing humanity from exploring the stars.

Working together, the heroes assault the barrier, but it reflects their energy, hitting the Watcher. Enraged, he sacrifices himself to destroy the barrier, and in the ensuing collapse, Captain America is thrown further into space. He passes Thor's hammer to Spider-Man, who realizes his purpose is to be a less action-oriented hero. As the head of Alchemax, he releases the Meta Genome Project for free, much to the consternation of his board. Over the next thousand years, the world grows increasingly better: Reed Richards helps the Atlanteans resettle on Europa, most of humanity gains superpowers and extra long life, enabling them to migrate into space. Eventually, Captain America returns, and tells an ancient Spider-Man he intends to travel deeper into the frontier, to hopefully inspire new generations. Spider-Man gives him Thor's hammer, and when Cap wonders why the gods left Earth, Spider-Man suggests that perhaps they did so once they saw a noble-enough people rise to take their place.