Force in Focus: The Mandalorian Episode 08

Plot
Outside of town, two Scout Troopers retrieve the child, then await further orders. However, IG-11 soon arrives and, following its programming as the child's nurse, kills the troopers. Meanwhile, Moff Gideon gives the Mandalorian, Cara & Greef until nightfall to turn themselves over to him. The Mandalorian suggests escaping via the tunnels beneath the city, used by the Mandalorian covert, but they are unable to open the access hatch. Just then, IG-11, the child in tow, blazes into town. During the ensuing melee, the Mandalorian is injured. Regrouping inside the tavern, Cara & Greef take the child into the tunnels while IG-11 removes the injured Mandalorian's helmet in order to administer medicine. Everyone reunites in the tunnels, where only the Armorer remains of the covert. She tasks the Mandalorian with returning the child to his people, calling them a clan of two and awarding him a Mudhorn signet (along with a jet pack). The group then follows her directions out of the city as she holds off a group of Stormtroopers. But another squad is waiting for them outside the tunnels, and IG-11 sacrifices himself to take them out. Outside, Moff Gideon attacks from his TIE fighter, and the Mandalorian takes to the sky via jetpack to send him crashing down. In the aftermath, Cara decides to remain on Nevarro to work as Greef''s enforcer, while the Mandalorian sets out with the child to find his people. Elsewhere, Moff Gideon emerges from the wreckage of his TIE fighter, wielding the Mandalorian Darksaber.

Firsts and Other Notables
This episode reveals that the Mandalorian’s name is Din Djarin, something Pedro Pascal has mentioned in interviews previously but wasn’t textually confirmed until now. It’s also confirmed that he was a Foundling (something hinted at previously) and not a native Mandalorian.

His status as a Foundling also helps flesh out his decision to renege on his contract and abduct the child from the client after accepting payment; for a Mandalorian, especially a Foundling, protecting a Foundling would override any other concerns of honor.

We also see the Mandalorian without his helmet for the first time. In a detail I appreciated, he is appropriately pasty.

The Armorer is familiar with the Force, thanks to her knowledge of the historic conflict between the Mandalorians and the Jedi (this is a bit of lore which has survived, at least generally, the de-canonization of the old Expanded Universe). She also tasks the Mandalorian with returning the child to its people (the Jedi) and names him the child’s father until he does (or the child comes of age), presumably setting up next season's arc.

One thing I'm not clear on, which will hopefully be addressed next season, is why the child must be reunited with his people when Din wasn’t? Din's family was dead, sure, but the Armorer seems to be suggesting that getting the child to any Jedi would be sufficient, so by that logic, young Din could have gone to any human. Hopefully, we'll learn more about how the whole "Foundling" process works.

The Mandalorian gets his jet pack (aka Rising Phoenix) this episode, and quickly puts it to good use. It'll be interesting to see how often it gets used moving forward (I imagine such a thing has got to be a strain on the show's effects budget).

One episode after his return, IG-11 dies again, for good this time by all appearances. 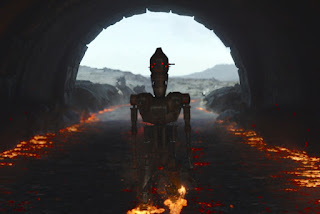 Casting Call
The two Scout troopers at the beginning (who punch the child then get killed by IG-11) are played by comedians Jason Sudeikis (of SNL fame) and Adam Pally (of Happy Endings) fame. At least, they provided the voices; I don't know if they actually suited up to play them.

This episode was directed by Taika Waitti (who also voices IG-11).

A Work in Progress
The scout trooper helmets have a visible hinge on them (to allow the fronts to lift up), something which wasn’t apparent in the original Return of the Jedi costumes, but which was a feature of Rebels (in which Ezra would frequently disguise himself as a Scout Trooper and flip up the front face mask portion at various times).

Also, after taking a shot at Stormtrooper accuracy in episode six, this one does it again, as both Scout Troopers fail to hit a target only a few feet away, specifically while practicing shooting.

Moff Gideon is revealed to be a former member of the Imperial Security Bureau (the Star Wars equivalent of the CIA or KGB), the same branch of government to which Director Krennic belonged in Rogue One.

The e-web heavy repeating cannon Moff Gideon deploys is a later model of the one used by the Snowtroopers on Hoth to try and take out the Falcon in Empire Strikes Back. It’s basically the Star Wars equivalent of a Gatling gun.

Cara’s full name is given as Carasynthia, and it’s revealed she is from Alderaan.

Meanwhile, Greef Carga is revealed to be a former Imperial magistrate.

Cara mentions being turned over to a Mind Flayer, which Greef scoffs at, saying such things were just "wartime propaganda"; I believe this is the first mention of Mind Flayers and is meant to be a bit of world-building, as opposed to a callback (other little bits of world-building including Gideon's reference to the "Night of a Thousands Tears").

In the course of an extended return to the flashback that shows young Din being rescued by the Mandalorians after his parents are killed by battle droids, we see more Clone Wars-era droids & weaponry.

Also, the weapons used by the Mandalorians in the flashback are very similar in style to the one carried by Boba Fett in the Original Trilogy.

The Mandalorian turning the e-web on the Imperials echos the similar technique he used in the first episode when he and IG-11 blazed into the fort holding the child.

Incinerator troopers (such as the one sent in to flush out the Mandalorian) first appeared in The Force Unleashed video game.

What's the Deal With the Darksaber?
The Darksaber, the lightsaber-esque sword Moff Gideon used to cut himself out of his crashed TIE, has a history which dates back hundreds of years (the weapon is purportedly the weapon of the first Mandalorian to join the Jedi order, who was a member of Clan Vizla), predating the Mandalorian/Jedi conflict referenced by the Armorer. More recently, it was wielded by Pre Vizla and then Darth Maul in Clone Wars, and by Sabine Wren in Rebels. It is a weapon that can only be claimed by someone defeating its previously wielder in combat, but presumably Gideon acquired during or after the Mandalorian purge in the course of his duties as an ISB officer on Mandalore. This is the first time it's appeared in live-action (and was a pretty cool lose-my-shit moment when it happened). 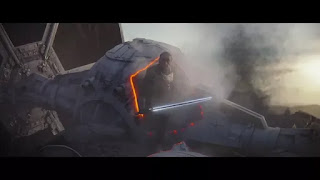 Austin's Analysis
The Mandalorian's first season ends with a bang, via a strong, action-packed episode that pays off the character development the main character has experienced over the course of its eight episodes (officially designating him as a father to the child and the head of his own clan of two, thereby giving the lone, foundling Mandalorian a family of his own, while also showing him expressing compassion, sorrow & gratitude to a droid), sets up potential plot arcs for the next season (Jedi!) as it deepens the series' mythology (Mandalorian is a creed, not a race), all while featuring a ton of awesome sequences, from IG-11 blasting into town, guns ablaze, to the Mandalorian going one-on-one with a Death Trooper (that has to be someone's fan fic, right?), to the Armorer taking out a squad of Stormtroopers with blacksmith tools, to the Mandalorian blasting into the air to take on a TIE fighter one-on-one. The end result is an episode which both puts an exclamation mark on the series' first season while also laying the groundwork for its next, making it clear this is meant to function like a TV show and not just "an eight hour movie broken into chunks". It is in multiple ways the culmination of everything that's come before it, and ends the season on a significant high note. 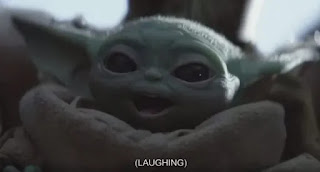