Couple of announcements regarding new review series to start off the week!

First, as patrons may have seen earlier today, next week will mark the beginning of my next "Patreon First" review series, as I take a look at the oft-derided mid-70s Champions book, a series which earns its X-adjacent status thanks to the presence of Angel & Iceman on a roster that is delightfully hodgepodge (also, John Byrne gets involved later in the run). Become a patron now in order to gain access to X-aminations of Champions before everyone else, and read along as I tackle such topics as Angel's trippy new costume, being a superhero in LA, and sentient Nazi bees. 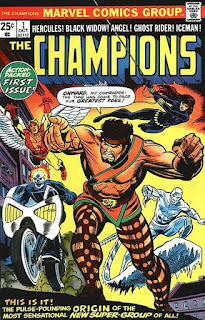 Secondly, as those of you who follow me on Twitter may have seen, starting with the launch of Hellions #1 in March, I will be reviewing each issue of that series alongside copywriter & X-fan Lizbethanne for the Xavier Files website. At least based on the initial solicits, Hellions is intended to explore the rather tricky role of mutant X-villains in the post-HoXPoX, Hickman status quo, which makes me excited to dig into it as that's one of the facets of the new status quo that I find most in need of exploration/explanation. Also, it features amongst it's cast two of my favorite recurring villains from Louise Simonson's X-Factor, Nanny and the Orphan Maker! 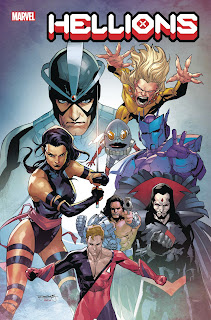 Links to both review series will be posted here, beginning next Tuesday with X-amining Champions #1!
Newer Post Older Post Home
Posted by Austin Gorton at 12:00 PM