Force in Focus: The Mandalorian Episode 07 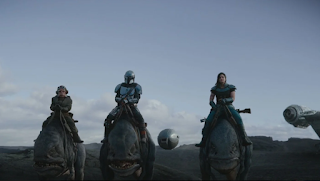 Plot
Receiving a message from Greef Carga calling for a truce in an effort to free both Navarro and the Mandalorian of the client, a suspicious Mandalorian recruits backup in the form of Cara, Kuiil, and a reprogrammed IG-11. Arriving on Navarro, Carga promises them the client remains lightly guarded, and tells the Mandalorian he plans to use the child as bait to get them close so the Mandalorian can kill the Client.. As the group journeys towards the city, they are attacked by flying creatures who badly injure Carga. However, the child uses the Force to heal his wounds, and this act of compassion prompts Carga to reveal that he intended to double-cross the Mandalorian. Instead, they will truly take out the Client together. The Mandalorian then sends Kuiil back to his ship with the child; he & Cara will pose as Carga's prisoners, along with the empty hover pram. But when they reach the city, they find the Imperial presence to be greatly increased, and when they reach the client, they are interrupted by a call from Moff Gideon, who arrives on the scene and targets the group with a furious volley of shots, killing the client. The Mandalorian and his allies survive, but are pinned down, while on the outskirts of the city, Kuiil is killed by a pair of Imperial scout troopers, who scoop up the child and head back to a waiting Gideon.

Firsts and Other Notables
Moff Gideon, leader of the Imperial forces on Navarro and boss of the client, debuts in this episode (or does he? Was he perhaps the caped figure who approached the not-dead Fennec Shand at the end of episode five?).

He brings with him some familiar Stormtrooper variants, including Scout troopers with speeder bikes, and some Death Troopers (the black clad troopers who were part of Krennic's personal detachment in Rogue One). 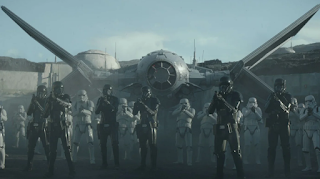 He also arrives via TIE fighter, enabling us to see one land in live action for the first time (technically, this is an Outland TIE, a different model than the standard fare, but still).

Along with Gideon's debut, a bunch of characters from earlier episodes return in this one, including Greef Carga, Cara Dune, Kuiil, and IG-11, reprogrammed into a more docile form by Kuill (not that the Mandalorian is happy to be working with him).

The client also turns up once more briefly before dying, a not-unexpected turn that is sad nonetheless because it means the end of Werner Herzog's delightful performance. More unexpected (and sad) is the death of Kuiil, who is killed by Imperial scout troopers while trying to return to the Razor Crest with the child.

Speaking of the child, this episode seems to confirm he is not a clone (of Yoda or anyone), as Kuiil, who has spent some time working in "gene farms", says he doesn't look engineered. Of course, your mileage may vary depending on how reliable a source on the matter Kuiil is, but we're clearly meant to take away "not a clone" at this point.

Towards the end of the episode, a vehicle pulls up outside the tavern where the Mandalorian and friends are trapped, and a bunch of Stormtroopers file out. The vehicle is based on the Imperial Troop transport, a unique-to-the-toy-line vehicle that was released as part of the vintage action figure line back in the late 70s (it was designed to serve as a kind of carrying case for figures). A version of it appeared in Rebels, but this marks its live-action debut.

Casting Call
Moff Gideon is played by Giancarlo Esposito, the last of the big casting names announced before the launch of the show to appear. Most of you probably know him from Breaking Bad, but I'll always remember him as the chief antagonist on NBC's Revolution, one of the few terrible Lost clones to actually get a second season (not that it really deserved one). 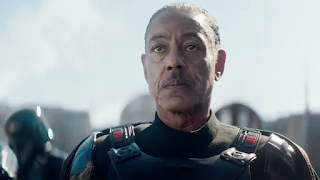 A Work in Progress
Cara's opponent in the makeshift MMA arena on Sorgan is an Iridonian Zabrak; there was one on the Jedi Council in Attack of the Clones, and the species is related to the Dathomirian Zabrak, of which Darth Maul is the most prominent example.

After the child Force chokes Cara in misguided defense of the Mandalorian, Kuiil mentions having heard rumors regarding the Force to his bewildered companions, a reminder that, even just 30ish years after the near-extinction of the Jedi, the concept of the Force as an energy field which can be manipulated by certain individuals is foreign to both a well-traveled bounty hunter (who, based on flashbacks, was ten-ish when he lost his parents in the Clone Wars during which the Jedi fought) and a former Rebel trooper who fought on Endor (and who was therefore probably just around the corner dancing with an Ewok from where Jedi Knight Luke burned the armor of his former Jedi Knight father).

Kuiil reveals he was essentially an indentured servant of the Empire, something which initially doesn’t sit well with the former Rebel Cara.

Cara also notes that Navarro was a hot spot during the war.

Kuill does some of that casual world building that is a hallmark of Star Wars, referencing “strand-casts” and the “Cytocaves of Nora”.

What's the Deal With Force Healing?
This episode was released the day before Rise of Skywalker moved up from its original release date, ostensibly to promote the film. But in a neat bit of corporate synergy, both this episode & the movie feature live-action depictions of Force Healing, with anyone who watched this episode first therefore being familiar with the notion when it pops up in the film. Force Healing is one of those things that's been around since the days of old the Expanded Universe (it also features in a lot of the video games, for obvious reasons), with various characters being said to have a natural affinity for it (Cilghal, a Mon Calamari student of Luke's from the post-Return of the Jedi, period comes to mind, though she is of course non-canonical these days), but this episode reintroduces it to the canon and represents the first time it's been shown in live action, just barely beating Rise of Skywalker to that particular punch.

Austin's Analysis
After a trio of mostly standalone episodes, the series returns to what is now clearly its season-long narrative for its penultimate episode, as the Mandalorian returns to Navarro to try and put to an end, once and for all, the constant target on him and the child. As such, this is more of a "Part 1 of 2" episode rather than its own thing (even moreso than how the first three episodes could loosely fit together into one long episode but still operate mostly as self-contained entities), but it uses the time allotted to not just advance the overarching plot, but also take stock of how far the central character has changed in the course of the series.

This comes in the form of the crew he assembles to back him up, as he rightly suspects Greef Carga of a double cross (but, as has been consistent throughout the series, even when he plans for the worst, he still comes up short; the character is kind of bad at plans) and seeks out allies. Compared to the opening of the series, in which the Mandalorian is a solitary figure working alone, it's a remarkable development: not only does he now have a ward of sorts in the child, he recognizes he can't protect the child himself and seeks out the allies which, in hindsight, the previous six episodes were all about setting up. Thus, the entire arc of the series, from the closing sequence of the first episode to this one, in terms of the character development of the main character, becomes clear: it's all about the Mandalorian learning he can't go it alone. Thus, this episode isn't just about teeing up the climax of the season-long arc, but also the arc of the Mandalorian himself.