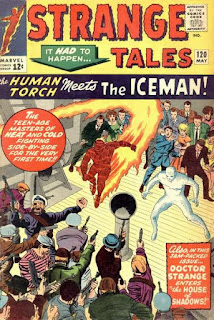 In a Nutshell
The Torch meets the Iceman

Plot
The Human Torch, reading an article about the X-Men calling Iceman a cold version of him, expresses an interest in meeting Iceman. He then heads out for a date on the Hudson River with Doris. Meanwhile, Iceman, lamenting his lack of success asking Jean Grey out on a date, is given the night off by Professor Xavier. He decides to head into the city and boards the same boat cruise as Human Torch. After Iceman bumps into Human Torch & Dorrie (neither of whom realize he is Iceman), the boat is attacked by pirates led by Captain Barracuda. Human Torch & Iceman spring into action. Working together, they are able to block the pirates' efforts to counteract their respective powers, and Captain Barracuda is defeated and left for the police. As Iceman walks back to shore alone, Human Torch returns to his date with Doris. Both are certain that a guy like Iceman must have dozens of girlfriends.

Firsts and Other Notables
This story features the first meeting between the Fantastic Four's Human Torch and Iceman (Fantastic Four #28, the first full meeting between both teams, occurs after this issue; Human Torch in fact references the events of this issue there. Humorously, both issues begin with the Fantastic Four reading a newspaper article about the X-Men). While "fire man meets ice man" is a pretty obvious story hook once you've got both types of characters in your stable (and Stan Lee, never one to miss out on Might Marvel Marketing opportunity, wastes very little time pairing these characters up once Iceman comes along), a Human Torch/Iceman partnership/rivalry doesn't ever really become much of a thing. They'll certainly team up again off-and-on through the years, but it never really becomes one of those classic Marvel buddy pairings (like, say, Human Torch & Spider-Man).

Strange Tales at this time was one of Marvel's double feature anthology books (necessitated by a distribution deal with rival DC which limited the number of titles Marvel could publish each month); at this point, the two features consist of a Human Torch story and a Dr. Strange story each month (eventually, Nick Fury would take over for Human Torch, and once Marvel got a better distribution deal, Strange Tales became a Dr. Strange solo book and got renamed).

This issue features the first appearance of Captain Barracuda, a modern day pirate and minor Silver Age villain (he will, appropriately enough, become something of a recurring foe for the Sub-Mariner during his Silver Age series). 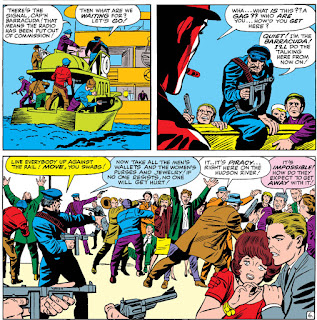 Doris Evans, the girl Human Torch goes on a date with in this issue, is his Silver Age girlfriend & something of a staple in his Strange Tales solo adventures.

The Chronology Corner
This story takes place between X-Men #4 and #5 (if we want to get really specific, the Marvel Chronology Project places it between panels of issue #5).

A Work in Progress
Human Torch is concerned with the press calling Iceman the cold version of him. 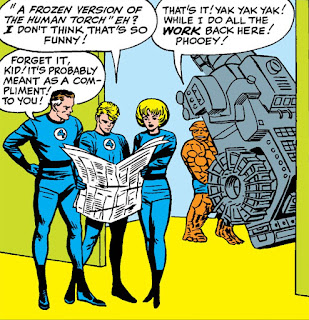 He also notes that the X-Men zealously guard their secret identities. 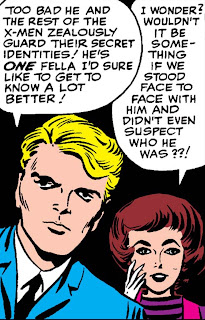 Ah, the Silver Age
Iceman, a 16 year old boy in the 60s, heads into the city for a night on the town, in a full suit, like all good Jack Kirby teens. 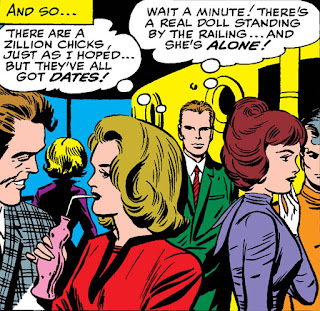 Barracuda, one panel after noting he’s fighting Iceman, is shocked to find an unseasonable ice jam in the river when he tries to escape.

Young Love
Angel & Jean are going out on a date as the story begins. 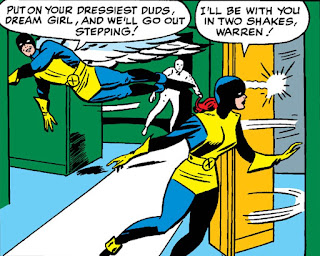 Iceman laments losing out on dating opportunities to Angel & Cyclops. 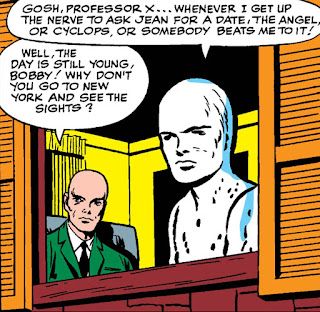 Pun with Peter Stan
Doris tells Iceman no one is a MATCH for her date. 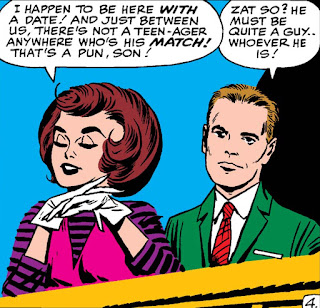 Austin's Analysis
In many ways, this issue is the platonic ideal of a fun, one-off Silver Age story: not overly-long, goofy but not to the point where the plot is incomprehensible or the characters inconsistent, part of a narrative tapestry but not an essential element in that tapestry (which makes the goofiness more endearing/acceptable), and with a clean, recognizable hook (fire guy meets ice guy). Not all comic stories, then or now, should fit this ideal, but if you wanted to hand someone a genuinely entertaining example of what early Marvel Comics were like, you could do a lot worse than this issue featuring Human Torch & Iceman fighting random pirates on a horned-up teen boat cruise along the Hudson River. The shortened page count in these double-feature books keeps Lee from having to fill too much space with long-winded narration or unnecessary plot twists, Jack Kirby is, of course, Jack Kirby, so even a tossed-off and relatively inconsequential story like this has plenty of exciting artistic moments, and the Human Torch/Iceman interactions are pleasantly balanced: no one comes off as an excessive jerk (something which plagues a lot of these early Marvel meet-ups), and both characters are allowed some time in the spotlight to show off their stuff. Maybe I've just been mired in the 90s for too long (and no one could argue that this is an essential piece of even the X-Men's Silver Age story), but I rather enjoyed this one.

Next Issue
Cyclops wanders Australia in X-Men (vol. 2) #44, Boomer makes a friend in X-Force #45, and Guardian & Vindicator stop by in Wolverine #92!