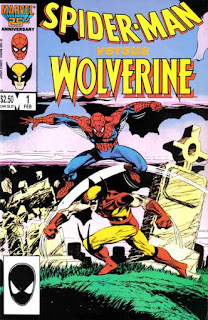 This review comes courtesy of Patreon supporter Bob McClennan. After supporting the site at the "Extraordinary" level for twelve months, he chose this issue for review. To get the chance to pick your own issue for review, and support the site, become a Patron here.

In a Nutshell
Spider-Man battles Wolverine in Berlin!

Plot
Years ago, before joining the X-Men, Wolverine helped defend his friend Charlie from KGB agents. Afterwards, Charlie disappeared. In the present, Spider-Man runs afoul of a series of murders. Frustrated by his inability to help the victims and screwing up his relationship with Mary Jane in the process, he swears off being Spider-Man. Meanwhile, reporter Ned Leeds believes the murders to be connected, that all the victims were former KGB agents targeted by the freelance mercenary Charlemagne. He prevails on J. Jonah Jameson to send him to West Berlin to investigate further, and Jameson sends a reluctant Peter Parker with him. Meanwhile, Wolverine also recognizes the work of Charlemagne in the killings, and heads to Berlin himself. There, he runs into Peter Parker and identifies him by scent as Spider-Man. Confronting him, Wolverine convinces Peter that he is in over his head, and Peter agrees to go home. However, when he returns to the hotel, he finds Ned dead, murdered by the KGB.

Wolverine helps Peter escape from the authorities questioning him about Ned's death, telling him once again to go home, before Wolverine heads to East Berlin in search of Charlemagne. He finds her - his old friend Charlie - and vows to protect her from the KGB agents targeting her. But their reunion is interrupted by Peter, who had put a tracer and Wolverine and acquired a Spider-Man costume from a local costume shop. In the ensuing fight, Charlie disappears and continues her killings, for which Wolverine blames Spider-Man. Eventually, Charlie finishes her revenge killings and sends a message to Wolverine. They meet in a graveyard and Charlie begs Wolverine to kill her now before she can be captured & tortured to death by the KGB, but Spider-Man objects. He & Wolverine fight, and the ferocity of Wolverine's attack makes Spider-Man lash out when Charlie reaches out to him from behind, and he inadvertently kills her, as she had planned. A shell-shocked Spider-Man then returns to America with Wolverine, and finds comfort in the arms of Mary Jane. 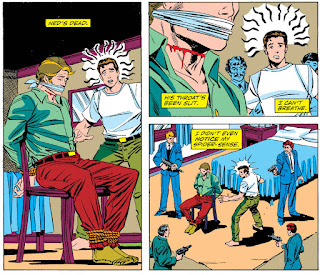 His death is doubly notable for the way it affects the then-ongoing mystery surrounding the identity of the Hobgoblin The story (as I understand it; I am by no means a Spider-Man expert and even moreso not an expert regarding all the twists-and-turns of the Hobgoblin saga, in-universe or out-universe) goes that Roger Stern, the writer who introduced the Hobgoblin (and made his identity an ongoing mystery) intended for some combination of Rodrick Kingsley and his near-identical brother to be the villain (this is the official canon today, thanks to a limited series Stern wrote in the 90s). But Stern left the book before resolving the mystery, and new Amazing Spider-Man writer (and future Marvel Editor-in-Chief) Tom DeFalco, without knowing what Stern had planned, pivoted, intending Richard Fisk, son of the Kingpin, to be the culprit while also using Ned Leeds as a red herring. But due to various editorial machinations involving Spider-Man editor Christopher Priest (working under the name Jim Owsley), DeFalco was forced off the book, and Priest stepped in to write the "Gang War" story, which revealed Richard Fisk to be the identity of the villainous Rose. He then wrote this issue and (rather unceremoniously) killed off Ned Leeds (mostly out of spite for DeFalco, goes the story), the red herring DeFalco had been developing. In the end (at the time; see above re: Stern's eventual return & retcon), Peter David anti-climatically resolved the Hobgoblin mystery in Amazing Spider-Man by revealing he was the...now-dead Ned Leeds (that story also retcons this issue, revealing that Ned wasn't killed by KGB agents, but by agents of Peter David uber-baddie The Foreigner, which is only slightly a step up from the super-villainous Hobgoblin being killed by random KGB agents).

While this isn't the first time Spider-Man have Wolverine met (they interacted with each other to some extent in at least Marvel Team-up Annual #1 and Secret Wars, and certainly were generally in the same room together for other stories even if they didn't interact directly on panel), this is more or less the first time the two spend any significant time together one-on-one, and the first really notable, direct fight between just the two of them. 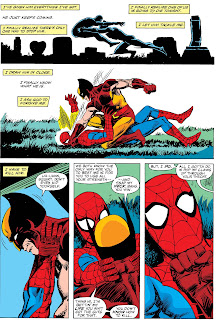 Wolverine figures out Peter Parker is Spider-Man thanks to his scent; I don't recall if this knowledge ever gets referenced in any of their later interactions.

Spider-Man accidentally kills Charlie at the end of the issue (an act which haunts him in the issue's closing panels). It is framed as a suicide on Charlie's part (she got Spider-Man's attention at a time he knew he was likely to lash out with his full strength) and while I can't say for certain this is the first death Spider-Man can claim direct involvement in (outside of something like Uncle Ben's death being his fault), I imagine it doesn't sit terribly well with devout Spider-Man fans (I don't love it as a character beat, but have plenty of bigger beefs regarding creative choices made with the character *cough* "One More Day" *cough*).

The sequence in which a poisoned & dying Charlie begs Wolverine to put her out of her misery is eerily reminiscent of Mariko's later death in Wolverine #57; Charlie is even dressed in clothing not unlike Mariko's traditional garb. 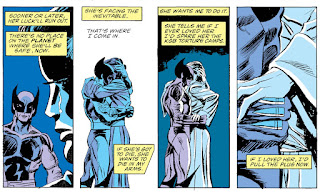 This is another story featuring an old friend of Wolverine’s we’ve never heard of before and will never hear about again (Charlemagne aka Charlie).

A special one-shot, this issue cost $2.50 and is double-sized, with thicker paper than usual.

The Chronology Corner
As far as Wolverine & the X-Men are concerned, this takes place in the gap between Uncanny X-Men #219 (when Havok rejoins the team) and #220 (when Storm heads out on her own to find Forge and reclaim her powers while the X-Men head to San Francisco), the same gap into which the limited series pitting the X-Men against the Fantastic Four & Avengers fall (this technically takes place before both).

A Work in Progress
As the story begins, Spider-Man is wearing his non-symbiotic black costume. 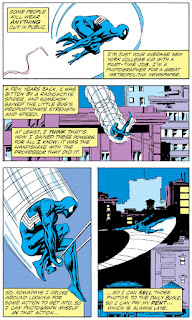 J. Jonah Jameson apparently uses the Internet model of “paying you with experience”.

Peter swears off being Spider-Man at one point in this story, which I have to imagine is a worn trope even when this was published. 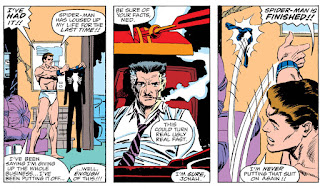 Later, when he has to go into action in Berlin, he gets a Spider-Man costume from a costume shop, which I think is another recurring Spider-Man thing. 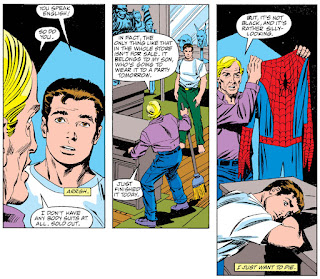 Storm & Havok appear briefly as Wolverine heads out on his own. 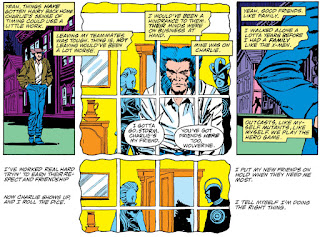 Peter is somehow able to store a English-German dictionary in his...wallet. 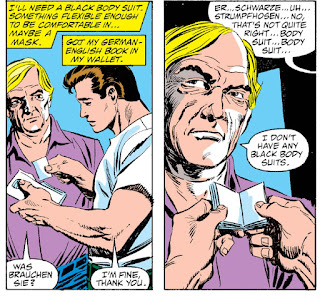 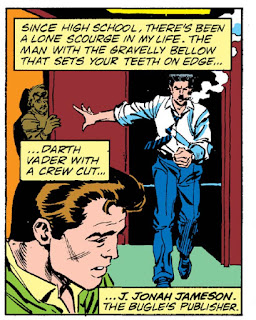 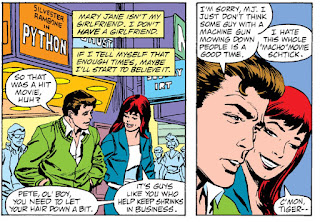 The Best There is at What He Does
During the opening flashback, Wolverine flies into a berserker rage. 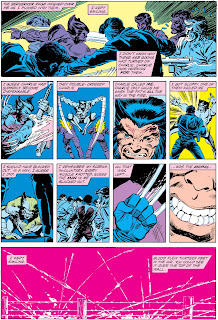 Austin's Analysis
Narratively speaking, from the perspective of Spider-Man, this is a not-insignificant issue, for the way it in-universe eliminates a long-running supporting character and in the real world, represents an odd bit of editorial interference and a notable swerve in the unfolding mystery of the Hobgoblin. From the perspective of Wolverine and/or the X-Men, not so much (which is why we've been able to go this long without really looking at it). As much as this issue can be seen, like the roughly contemporaneous "Death of Jean DeWolff" and "Kraven's Last Hunt" stories, as part of the ongoing darkening of Spider-Man's world and an examination of his personal ethos at a time when darker, edgier anti-heroes (like Wolverine) were on the rise, for Wolverine, this issue really just represents another day at the office.

So much so that, from Wolverine's perspective, this reads pretty much like what will later become the standard Wolverine one-shot/pseudo-annual. It features the kind of hard-boiled Claremont-by-way-of-Miller voice that had already become standard for the character, an exotic locale that takes Wolverine away from his usual trappings, and a new character who this story takes great pains to assure us is a significant person in Wolverine's life despite having never been mentioned before (or since). Of course, in 1987, there was still some novelty in the notion of breaking Wolverine out of the X-Men ghetto (a ghetto containing one of comic's best-selling titles, of course) for a solo adventure and/or pairing him up with other Marvel Universe characters (this was published about a year ahead of Wolverine's regular featured role in Marvel Comics Presents and the subsequent solo Wolverine book, both of which would make the circumstances of this issue less novel), and much like Punisher guest appearances, there is some thematic hay to be made by running Wolverine up against a character with more traditional morals like Spider-Man. But that is all felt on the Spider-Man side of things: Wolverine comes out of this story more or less the same as when he started, whereas the impact on Spider-Man, thematically, narratively, and publication-wise, makes it very clear this is, first and foremost, a Spider-Man story that happens to feature Wolverine.

Next Issue
Another Retro tale as we journey back to the Silver Age for Strange Tales #120!