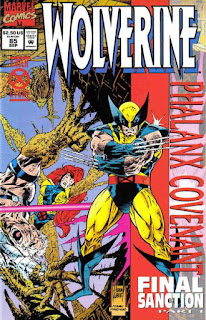 In a Nutshell
Wolverine, Cyclops, Phoenix & Cable reunite to battle the Phalanx.

Plot
Cyclops & Phoenix arrive on Muir Island to find it overrun by Phalanx trying to access the genetic information stored in the computer systems. Their plane is attacked & sent crashing to the ground, but the timely arrival of Wolverine allows the three to retreat to a different part of the island. After checking in with Lang, the Phalanx track down the three X-Men, but just then, Cable arrives and helps push them back. The foursome formulate a plan in which Phoenix & Cable will telepathically disguise them while Cyclops & Wolverine infiltrate Moira's lab and retrieve a Cerebro component they can use to locate the captive X-Men. But when on the Astral Plane, Cable's proximity to Jean trigger memories of his childhood, which breaks their connection & attracts the attention of the Phalanx. Cyclops & Wolverine retrieve the component & prime the lab to explode, and Cable tells them he'll stay behind to cover everyone else's escape. But Wolverine goes back for Cable, and Phoenix manages to telekinetically protect them when the lab explodes. Picked up by Wolverine's pilot friend Harry, Wolverine tells him to make for Tibet, where the Phalanx are holding the X-Men captive.

Firsts and Other Notables
"Final Sanction", the third (and shortest) "Phalanx Covenant" sub-story, begins here (it concludes in Cable #16). It chronicles Wolverine, Cable, Cyclops & Phoenix' efforts to rescue the captive X-Men and defeat the Phalanx once and for all.

Wolverine is reunited with Cyclops & Phoenix for the first time since issue #75 in this issue, his most direct interaction with any of the X-Men since losing his adamantium and leaving the team. Cyclops is characteristically curmudgeonly about it. 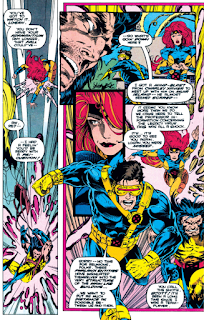 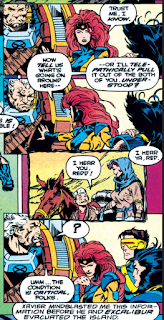 This is the first story where it feels like the distinction between Wolverine having bone claws rather than metal ones first starts to blur. There's a scene in the conclusion that is even more egregious that I'll point out when we get there, but even here, Wolverine is able to slash through the Phalanx with ease. Given that they're essentially metal people, you'd think the claws would shatter the moment they struck one of the Phalanx with force. 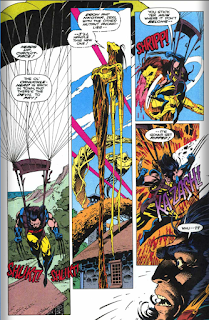 When the Muir Island Phalanx check in with Lang, he is concerned that they will discover a secret he is hiding. This will come to fruition in Cable #16 (in which Lang will help the X-Men in the interest of saving humanity). 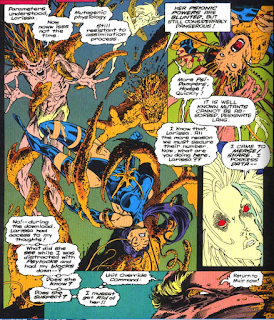 Minor supporting character Harry Tabeshaw drops Wolverine off at Muir Island, then picks up the four mutants to take them to Tibet, making his last appearance to date. 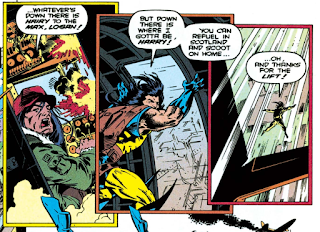 Like the other "Phalanx Covenant" issues, this one comes with a foil-enhanced cover and was published in a second, standard format. 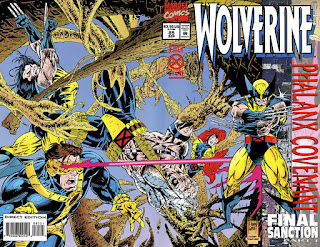 A Work in Progress
We’re reminded that Wolverine fought in WWII as he parachutes down to Muir Island. 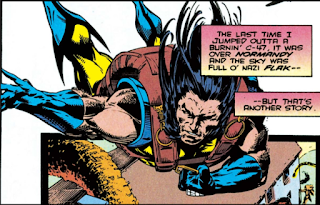 Wolverine apologizes for missing Scott & Jean's wedding. Also, he can see the additional years Scott & Jean lived in the future in Jean’s eyes. 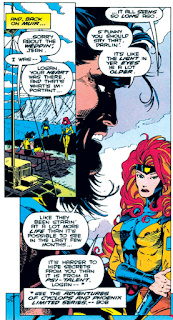 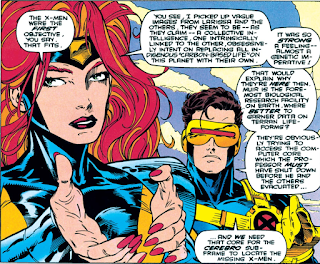 Cable is surprised Jean knows about his techno-organic infection. 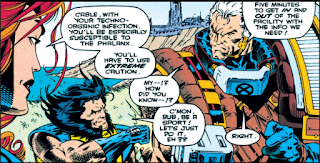 The Grim 'n' Gritty 90s
Cable arrives on the scene in all his 90s glory. An action figure of this iteration of the character (with a big gun mounted to an enormous shoulder pad) will be made. 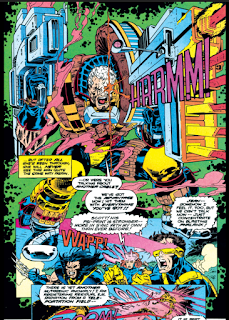 Austin's Analysis
Like X-Factor #106, this issue kicks off a "Phalanx Covenant" substory, and like X-Factor #106, it grounds the crossover craziness in more character-driven moments. Because for all the techno-organic chaos and explosions, this issue is all about reunions: Wolverine coming face-to-face with Cyclops & Phoenix for the first time since he left the team (and they got married), and then, the first encounter between Cyclops & Phoenix and Cable since the former returned from spending more than a decade in the future raising him (something Cable has yet to piece together). Those two reunions (and the various interactions they inspire) form the heart of the issue, to the point where it doesn't really even matter what the Phalanx are doing, because the most interesting things happening in the issue are those four characters interacting with each other in various permutations.

Of course, unlike X-Factor #106, this is also an action-packed issue that lets Adam Kubert cut loose with some dynamic fight scenes, taking advantage of the fluid & macabre nature of the Phalanx (such as when Wolverine cuts off one of their heads, only to have it stretch out on a techno-organic tendril and loop back around) and the bombastic 90s elements of Cable (the panel when he arrives on Muir Island is so just so pure 90s Cable). So even while it's setting up the narrative arc of "Final Sanctions" and doing interesting things with all four of its main characters, this issue is also telling a visceral, entertaining action story, helping "Final Sanction" stand aside "Generation Next" as one of the better substories of the crossover.