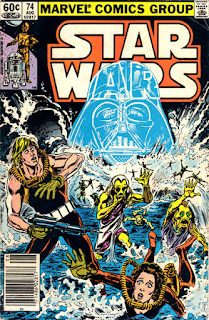 In a Nutshell
The search for Tay Vanis begins on the waterworld of Iskalon.

Plot
Sent by Rebel command to the watery world of Iskalon in search of missing Rebel agent Tay Vanis, Luke, Leia, Lando, Chewbacca & the droids meet with Primor, leader of the planet's aquatic School. They learn that Vanis' droid, K-3PX, contained all the information Vanis had gathered about the Empire's secret project, and was last seen at the Gamandar Citadel, an Imperial base on the nearby planet Gamandar. Lando & Chewbacca decide to infiltrate the citadel along with the droids & Mone, Primor's son, leaving behind the more recognizable & notorious Luke & Leia on Iskalon. Instead, Primor takes them exploring underwater, during which Luke spots Kendel, Mone's wife, inside the air-breathing underwater city of Pavilion, her breathing apparatus smashed. As he & Leia rush to get her back in the water, on Gamandar, Imperial Admiral Tower, upon receiving news of the Rebel presence on Iskalon from his spy, fires a massive missile at the planet. The missile flies past the Millennium Falcon, then impacts near Pavilion, creating a massive tidal wave that floods the city.

Firsts and Other Notables
Duffy's "Search for Tay Vanis" story begins in earnest with this issue, and notably, the Rebels learn that Vanis believed the Empire was working on some kind of massive weapon near the planet Iskalon; this will turn out to be the second Death Star. 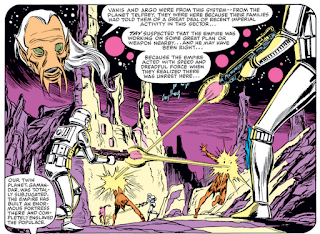 Speaking of, this is the issue of the series which would have been on the stands when Return of the Jedi was released (it went on sale May 17, 1983).

The non-Vader Imperial antagonist du jour for this story is Admiral Tower, who is visually notable for his electronic eye patch. 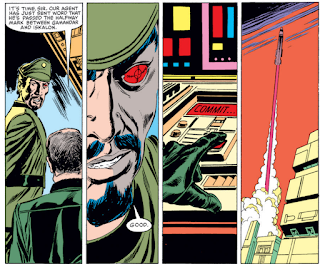 Meanwhile, the Rebels befriend Iskalon natives Primor, his son Mone, and Mone's wife Kendle. Primor & Kendle only appear in this story, but Mone will pop up again in a couple later stories.

Appropriate for a waterworld, this issue introduced a “scuba” variant of Stormtrooper.

A response to a letter in this issue's Letters Page corrects the credits for issue #70, declaring that it was drawn by Kerry Gammil & Ron Frenz, while the colorist was Christie Scheele.

A Work in Progress
It’s mentioned again that while Luke, Leia, etc. have been diverted from the search for Han, other people within the Rebellion are carrying on in their stead.

The Star Warriors have been diverted to the planet Iskalon in the wake of their adventure on Lahsbane, in which they learned Yom Argo’s Rebel partner Tay Vanis was last seen on the planet.

Stunned at being surrounded by so much water, Luke reminds us that what he farmed for on Tatooine was water. 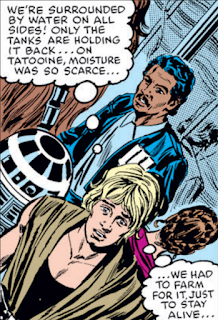 It’s revealed that both Yom Argo & Tay Vanis we’re with the Rebels on Yavin Four when Luke blew up the Death Star.

Somehow Luke & Leia can talk underwater despite wearing apparatus very similar to conventional scuba gear (with a rebreather in their mouths). 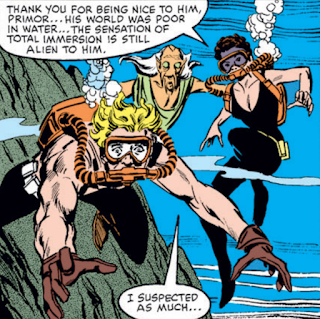 Um, Actually
Luke declares he’s never seen a water world before, despite the amount of time he spent fighting alongside sea monsters on the planet Drexel in issues #11-15. 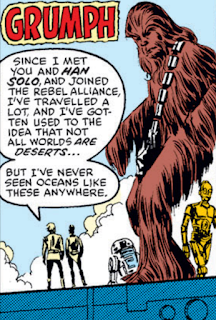 He also finds it strange to be underwater despite, again, despite the setting of his very first post-New Hope mission for the Alliance.

The Space-Lexicon
Threepio notes that the natives of Iskalon speak Galactic Standard.

Remember Star Wars?
Leia tells Luke about the oceans on Alderaan, before the Empire destroyed it, of course. 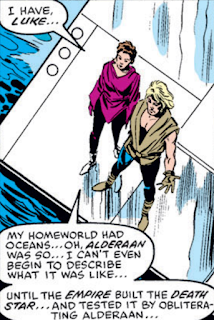 Young Love
Leia is shown periodically pining for Han throughout this issue. 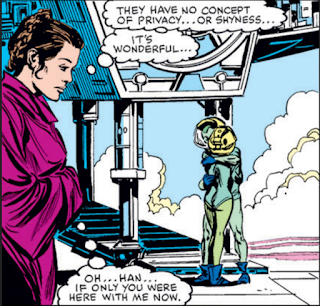 You Kiss Your Sister With That Mouth?
The series continues to flirt with a Luke/Leia romance, despite the upcoming revelation in Return of the Jedi and, you know, all the pining Leia does for Han even just in this issue. 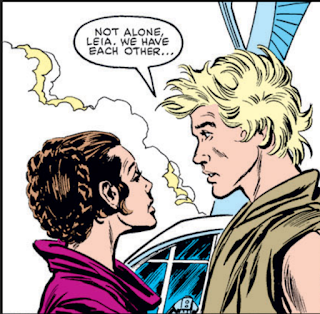 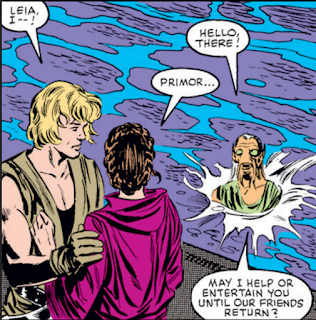 Austin's Analysis
After the relatively standalone previous issue and her completion of the "Search for Han Solo" arc begun by Michelinie, this issue marks the beginning of Duffy's first multi-part story, one which will carry the series up to the events of Return of the Jedi. Thankfully, it's a marked improvement over the previous issue (putting aside the continuity issues regarding Luke's relationship with large bodies of water, of course). Duffy still doesn't seem to have a great handle on Leia, but that's a lot less problematic in this issue than the previous.

She does, however, do a decent job of setting things up for the story, including a fair amount of world-building for Iskalon, the introduction of a local Imperial threat with ties to Darth Vader, and teasing the mystery of Tay Vanis and the Empire's secret project, all while finding something for all the main characters to do in the process. The end result represents a fair number of narrative balls thrown into the air to explore in subsequent chapters, which is rarely a bad thing for the start of a story.