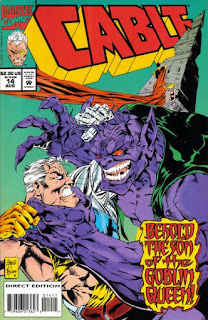 Plot
After quickly dispatching D'Spayre, Belasco tells Cable & Lee that he's brought him to the Nexus of All Realities. It has been growing of late, encroaching on his realm of Limbo, and he believes Cable can help stop it. He tells him that the same individual who once corrupted Cable's mother and tried to forge a link between Earth & Limbo is using the Nexus to try again. Meanwhile, Cannonball & Siryn try to track down Cable, but can't locate him anywhere on Earth. Back in the Nexus, Belasco leverages Lee in order to get Cable's help, at which point S'ym reveals himself. He's pleased to meet the son of the Goblin Queen, but when he threatens Cable, Cable fights back, eventually gaining the upper hand via his mutant powers. He seemingly kills S'ym, at which point Belasco sends Lee & Cable back to Earth.

Firsts and Other Notables
S'ym makes his second "return from the dead, get put back down in the course of the issue" appearance since the end of "Inferno" (the last was Excalibur #39, the end of the weird Dr. Doom/Darkoth Limbo story). His next such appearance will be in X-Men Unlimited #19. 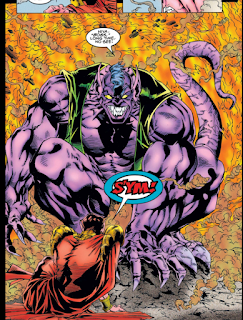 Similarly, this marks the end of Lee's brief foray in this series; her next appearance will be in X-Men Unlimited #9.

The weird one-off logo from last issue is used in the title of this issue.

Oddly, the story in this issue doesn't have a subtitle, whereas the previous two parts did.

The Chronology Corner
Cannonball & Siryn appear between X-Men #30 and X-Force #35 (issues #35-37 of X-Force take place between this issue and the next).

A Work in Progress
Belasco says D’Spayre is a product of the Nexus of All Realities; I have no idea if that’s consistent with the character’s origins (but I suspect it’s not).

He also says that Limbo is a corner of the Nexus.

We also get a fun Steve Skroce-drawn recap of “Inferno”. 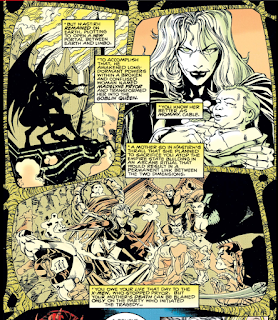 After the recap and Belasco telling Cable he’s the key to stopping (or facilitating) the expansion of the Nexus, Lee hilariously asks herself how she keeps hooking up with these people.

In another nice moment, S’ym is intrigued to learn Cable is the son of the Goblin Queen.

He also claims, as such, Cable’s death will still break down the walls between Earth & Limbo.

Cable pulls a Stan Lee and tells S’ym he was defeated telepathically after he telekinetically impales him (which is the same way he killed Senyaka in issue #12). 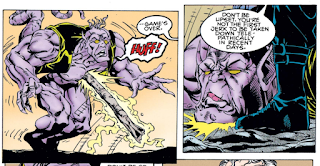 The issue ends abruptly with Cable & Lee seemingly teleporting out of the Everglades, despite Cable being expressly unable to do so in issue #12.

The Cable Guy
As in the Cyclops & Phoenix mini, Belasco offers up a meaning for Cable’s name, calling him a conduent between human & mutant, past & future, and possibly science & magic. 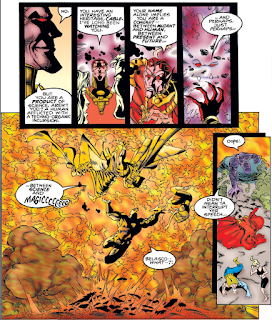 Austin's Analysis
Following on from the previous issue, which had some fun playing with Lee Forester's history with the X-Men (specifically, D'Spayre & Cable's father), this issue uses as its starting point Cable's parental legacy. While the events of "Fathers & Sons" in issue #6-8 confirmed Cable's familial relationships once and for all, most of the explorations of those relationships in the wake of that story have focused on Cyclops. This story is the first to instead explore where Cable fits within the legacy of his birth mother - Madelyne Pryor - who, like Cyclops, was also once willing to sacrifice her child (albeit for far more sinister reasons, and not for Cable's overall well-being). As a result, this issue reads almost like a quasi-epilogue to "Inferno", as S'ym (the demon who corrupted Cable's mother) turns up to finish what she started.

The end result is far from perfect. The relationship between Belasco, S'ym, Limbo and the Nexus (and what each does or doesn't want) doesn't really hold up to much scrutiny. The final confrontation between S'ym & Cable basically amounts to a few panels of the two trading punches before Cable telekinetically impales the demon, and while that makes for some nice symmetry with issue #12 (and underscores Cable more...blunt approach to solving problems), it's something of an ignominious (and abrupt) end for a character who was a fairly significant heavy across multiple books circa "Inferno". Lee more or less gets lost in the story (with her biggest contribution being, unfortunately, used as a hostage). And the whole thing could have used another issue (or even two) to breath (as evidenced by the way it just sort of...stops when it runs out of pages), to explore more fully Cable's legacy as the Son of the Goblin Queen and his feelings for a mother who became so corrupted she was willing to kill him to effectively end the world.

But what we've got is still fun. Madelyne gets referenced so rarely, any mention of her is appreciated, and it's good to see Cable dealing with that side of his family history for a change. Skroce's artwork, just one issue on from the start of his run, is much improved (likely helped by being inked by only one inker in this one), showing a particular adeptness for facial expressions. And having too much story for one issue isn't the worst problem to have. Bottom line, for all its faults, this issue is a blast just for exploring, however briefly, Cable's little-referenced connection to "Inferno" and the larger Limbo mythology, and the legacy of his even-more-rarely referenced birth mother.