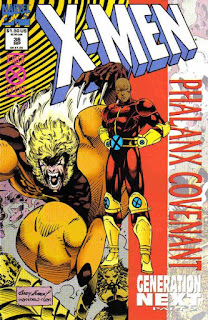 "Drop the Leash: Book One - Generation Next Part Two"
September 1994

In a Nutshell
The Banshee's team rescues Everett Thomas from the Phalanx, but Paige Guthrie is captured.

Plot
The Phalanx continue their efforts to find a way to assimilate mutants, experimenting on the captive Monet, while Lang muses that the group is evolving beyond his expectations. Meanwhile, in St. Louis, Banshee, Emma Frost, Sabretooth & Jubilee rescue Everett Thomas from the Phalanx, but in Kentucky, the Phalanx manage to abduct Paige Guthrie. Back in St. Louis, the Phalanx attack the X-Men, but Emma is able to help Everett use his power to sync Jubilee's power and trigger a massive explosion. Just then, Lang appears and taunts them with an assimilated Sara Grey and the captive Paige. Emma cautions him that in trying to save humanity, he may be dooming it, and when Lang disappears, she reveals that she was able to at least make telepathic contact with Paige and knows the general location where she is being held. Just then, Jubilee points out that Sabretooth has gone missing, and Banshee realizes Sabretooth has escaped.

Firsts and Other Notables
This issue marks the first appearance of Everett Thomas, who will join Generation X as Synch. He has the mutant ability to "synch" his power to the power of mutants around him, often represented by a rainbow aura surrounding him when he's syncing (though that doesn't appear in this issue). Synch is one of those characters who I tend to think of as a "pure" Generation X character, as he never really develops as a character outside that series' initial 80 issue run (because, of course, he dies at the end of it), whereas characters like M and Husk will go one to be featured in varying degreess in other series after the book's cancellation (and, of course, characters like Jubilee, Emma & Banshee have both a pre- and post-Generation X history). It's also worth noting that Everett is depicted as much taller and buffer here than he will usually be presented in Generation X. 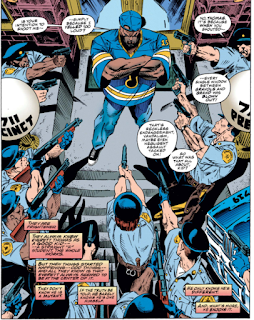 The long-missing Sara Grey, sister of Jean, turns up in this issue, having been forcibly assimilated by the Phalanx, who have been learning information about the X-Men from her. This brings to an end an mystery that's been dangling unresolved for a loooong time, as Sara first went missing in X-Factor #12 after her house was firebombed (an attack later attributed to the Right, who of course, have roots in the Phalanx) and stayed missing even after he children turned up shortly before "Inferno" and were left in the care of their grandparents. Obviously, "prisoner of the Phalanx" isn't what Louise Simonson or Chris Claremont had in mind as a resolution when Sara first went missing (given the Phalanx didn't even exist at that point), and it's kind of funny that the Phalanx took her to get info on the X-Men, considering how little interaction Sara had with them (as opposed to other non-mutant allies like Moira or Stevie Hunter or Tom Corsi or Sharon Friedlander  or Charlotte Jones or Opal Tanaka, etc.), but nevertheless, Nicieza should be applauded for making the effort to die off this long dangling plot thread. 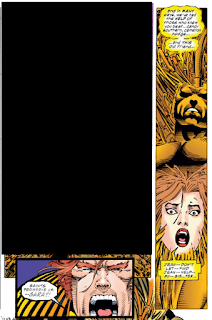 Synch, Blink & Skin all appear alongside Jubilee and Paige (ahead of their first full appearances) as the Phalanx discuss targeting the next generation of mutants. 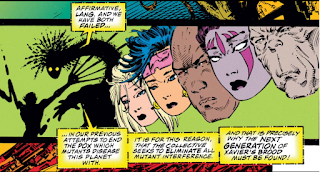 Paige Guthrie is successfully captured by the Phalanx this issue (she is also described as a “transitional body morph"), giving each side two wins apiece as far as we know at this point (Monet & Paige with the Phalanx, Jubilee & Synch with the X-Men). Interestingly, Paige is presented here with little introduction or explanation of her connection to the X-Men (other than sharing a surname with Cannonball), despite having only previously appeared (in this teenage/neo mutant form) in X-Force. 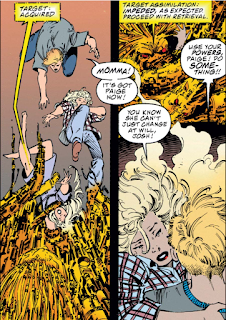 The issue ends with Sabretooth having shed his restraints and escaped (as the detonator Banshee was using to keep him in line was damaged during the fight with the Phalanx). His time with the X-Men is far from over though, as he'll be recaptured before the end of the crossover. 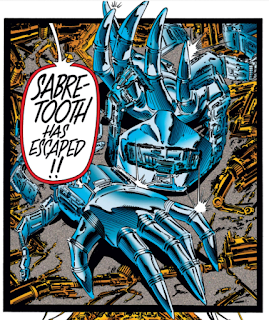 Here's the full cover to this issue, with foil enhancement. 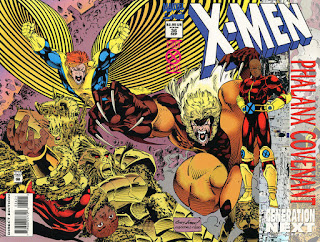 A Work in Progress
A narrative caption in this issue states that the Phalanx’ goal is to absorb all organic life into their collective.

The still-human Lang notes that the Phalanx are evolving, and he worries that in trying to eliminate mutants, he’s risked all of humanity. 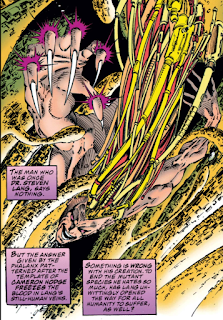 Banshee tells Everett his parents will be fine since the Phalanx only target mutants (which isn’t entirely true, especially given that Lang later trots out the captive non-mutant sister of one of the X-Men). 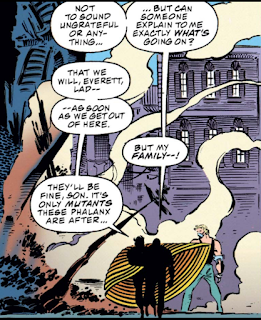 Banshee is the most effective fighter against the Phalanx, as his ability modulate the frequency of his scream stymies their ability to counter it, but they eventually figure out the best way to counter his power is to just shove gunk down his throat so he can’t scream. 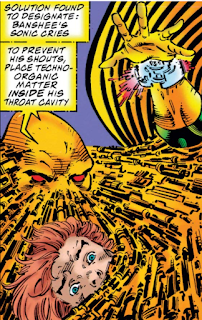 Everett, with help from Emma, is able to Synch Jubilee’s power and use it to an extent she’s always been afraid to, in order to detonate the Phalanx on a sub-atomic level. 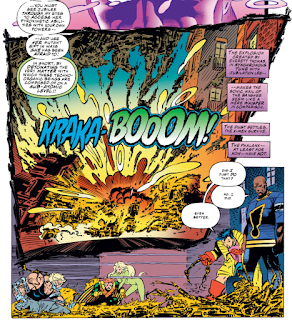 The ad hoc X-Men learn Lang is behind the Phalanx in this issue (and Emma is aware they are growing out of his control). 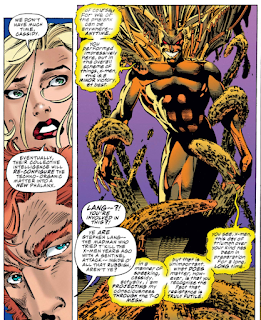 Human/Mutant Relations
Jubilee refers to humans as “straight genes”, a slang term I don’t think appears outside this issue. 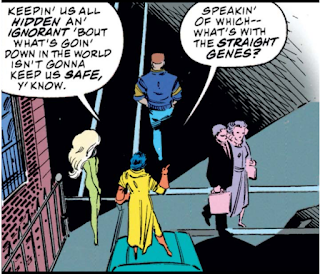 Austin's Analysis
Plotwise, this is a pretty standard "deepening of the crossover" affair, with the conflict widening as both the heroes & villains achieve minor victories (the X-Men rescue Synch, the Phalanx capture Husk), but Nicieza helps elevate things by maintaining some of the horror movie tone generated by Lobdell in the first chapter of "Generation Next", specifically the "anyone could be a Phalanx"/Invasion of the Body Snatchers vibe (the opening scene of Everett being confronted by cops, half of which turn out to be Phalanx, is pretty great), and amping up the sense of just how overmatched this ad hoc group of X-Men are: Banshee is still able to inflict harm on the Phalanx (assuming they don't just stuff themselves down his throat) but Emma & Jubilee are functionally useless in terms of direct assaults, and we're told even Sabretooth is aware his berskerker savagery can only take the fight so far. And, of course, the issue ends with the great cliffhanger reveal that Sabretooth has shed his restraints and escaped, thus widening the conflict even further: these X-Men are now down a member, and seemingly have another threat to worry about on top of the Phalanx. Combine all that with some top-notch art from Andy Kubert, and it's clear that while the main arc of the story is still a fairly small affair in the grand scheme of things, it's the little details and level of craft involved that continue to elevate this portion of the crossover.