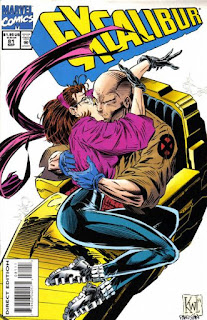 Plot
At Excalibur's old lighthouse, Britanic tells Meggan about his journey through the timestream. Meanwhile, Kitty takes Douglock to a tavern in Aberdeen, hoping to determine how much of Doug Ramsey is in him, while Professor X takes Moira to Paris to give them both a much needed break. At the lighthouse, Meggan asks Britanic if he can tell her their future, but Britanic explains that all of human existence is such a small fraction of time, it's impossible for him to narrow down his perceptions to just their lives. Meggan reminds him of the recent changes she's experienced as well, and both confirm their love in the face of such changes. In Aberdeen, after Kitty stops a mugging, Douglock admits to being lonely, and Kitty offers him a place with Excalibur so they can figure out how much of Doug he is together. In Paris, Xavier & Moira reminisce about their past relationship, and take comfort in the fact that no matter what, there will always be a place in their hearts where they're still in love.

Firsts and Other Notables
Douglock more or less joins Excalibur with this issue, as Kitty suggest he stay with the team so they can work together to figure out his relationship to Doug and Warlock. He will stick around through the end of the series with issue #125. 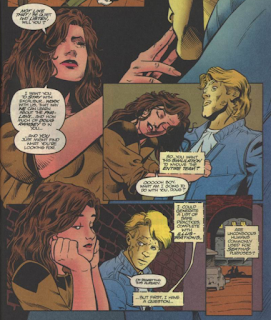 Britanic & Meggan reconnect atop Excalibur’s old lighthouse headquarters in this issue, despite the fact that it was destroyed (by Meggan) in issue #50, prompting their move to Braddock Manor (and eventually Muir Island). 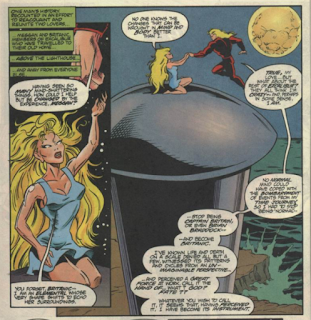 Xavier wonders how to inform the public about the Legacy Virus now that it’s affecting humans, which will become a plot point post-Age of Apocalypse. 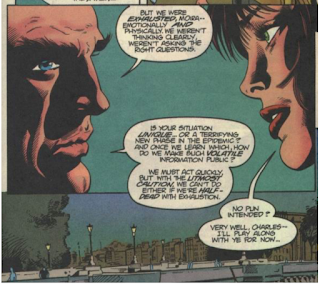 Creator Central
One of the inkers of this issue is W.C. Carani. He would go on to do a lot of work on DC's Legion of Superheroes franchise, but he's also a big supporter the non-profit group that organizes the two big local comic book conventions every year. He's been at the shows pretty much as long as I've volunteered with the organization, and is a tremendously nice & friendly guy. And all these years, I had no idea he had worked on some of the X-books (he'll be popping up in a few more coming up).

I asked him about his work with the X-office at the last convention (after having come across his name in the credits to this issue), and he laughed, saying that he's never really given that work much thought, as Marvel was so desperate to get the X-books out on time that they were pretty much paying any and every inker they could find to work on as many pages as possible, just to get the work completed. Which certainly fits with the number of issues featuring multiple inkers from around this time.

The Chronology Corner
Obviously, this issue takes place before "Phalanx Covenant". Presumably, Marvel wanted multiple issues of the two flagship X-Men books to be involved in the crossover, but the rest of the series only contribute an issue a piece. As a result, for the two months of the crossover, there's a handful of non-"Phalanx Covenant" issues each month.

A Work in Progress
There’s an old picture of Wolfsbane, Doug, Shadowcat, Warlock & Cannonball which is interesting only because Wolfsbane, Cannonball & Douglock are the central characters in “Life Signs” (I'm also not sure why Sam seems so grumpy in this picture; he was never the taciturn/no-fun-having leader type a la Cyclops). 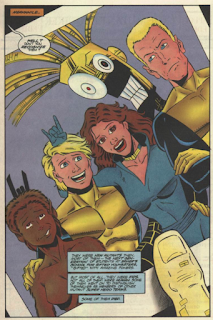 It’s also noted that after the events of the "Douglock Chronicles", Forge wanted to examine Douglock but Kitty prevailed on him to let him stay with the team. 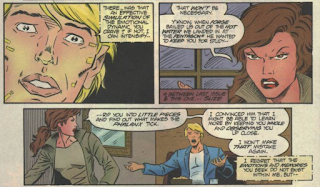 When Kitty phases while stopping an attack on a homeless woman, the assailant calls her a sprite, to humorous affect. 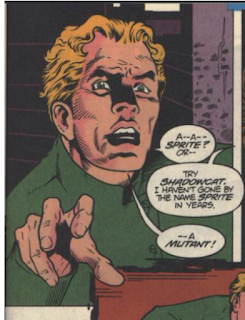 The Grim 'n' Gritty 90s
Having forgot to pack any clothes for their getaway, Xavier telepathically makes Moira look like Princess Diana as they dine at a fancy restaurant. 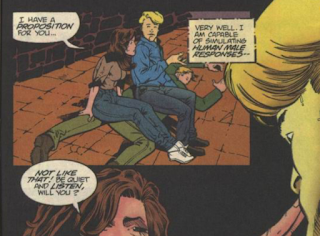 Austin's Analysis
The art is inconsistent and the scripting bland & generic, but this is easily the best issue of the series in a while. In part because it actually focuses on members of Excalibur, but moreso because of its focus on character interplay. In the wake of all the craziness of the last half dozen or so issues, we get Britanic & Meggan having a heart-to-heart, Kitty coming to terms with Douglock, and Xavier & Moira reminiscing about their youthful passions as they take a sanity break in the wake of Moira's diagnosis. This certainly isn't on the level of other recent Lobdell & Nicieza quiet issues, but is nevertheless a breath of competent & enjoyable air for this series.